A magnifying glass, an ordinary double convex lens having a short focal length, is a simple microscope. The reading lens and hand lens are instruments of this type.
..... Click the link for more information. .
The Columbia Electronic Encyclopedia™ Copyright © 2013, Columbia University Press. Licensed from Columbia University Press. All rights reserved. www.cc.columbia.edu/cu/cup/
The following article is from The Great Soviet Encyclopedia (1979). It might be outdated or ideologically biased.

a lensless ion-optical device for producing an image of the surface of a solid body, magnified several million times. Using such a device, surface details separated by distances of the order of 2–3 angstroms (Å) may be distinguished, making possible observation of the arrangement of individual atoms in a crystal lattice. The field-ion microscope was invented in 1951 by the German scientist E. Müller, who previously developed the field-emission microscope.

A diagram of a field-ion microscope is shown in Figure 1. The tip of a fine needle serves as the positive electrode and at the same time as the object whose surface is shown on the screen. The atoms or molecules of the gas filling the inner part of the device are ionized in a strong electric field near the surface of the tip, giving up their electrons to it. Under the influence of the field, the positive ions that form acquire radial acceleration (perpendicular to the surface of the tip), rush toward the fluorescent screen, whose potential is negative, and bombard it. The luminosity of each element of the screen is proportional to the density of the ion current incident upon it. Therefore, the distribution of luminosity on the screen reproduces on a magnified scale the distribution of the density of appearance of ions near the tip. The scale of magnification m is equal to the ratio of the radius of the screen R to the radius of curvature of the tip r:m = R/r (the finer the tip, the greater the magnification). 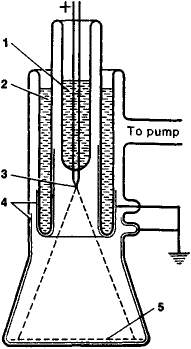 The probability of direct ionization of the gas in the electric field proves to be significant if, at distances of the order of the dimensions of an atom (or molecule) of the gas, a drop in potential of the order of the ionization potential of the particle is created. The intensity of sucha field is exceedingly great—from 2 to 6 volts per angstrom (V/Å), that is, (2–6) X 108 V/cm. Such a strong field can easily be created near the surface of the tip (at a distance of 5–10 Å from it) when the radius of curvature of the surface is sufficiently small—from 100 to 1,000 Å. It was this factor (in addition to the desire for large magnifications) that brought about the use in field-ion microscopes of a sample in the form of a fine tip. The process of the ionization of gas in the strong field of the tip, which takes place in the microscope, is called autoionization.

Near the tip the electric field is not uniform; its local intensity increases above the steps of a crystal lattice or individual protruding atoms. In such areas the probability of autoionization is higher and the number of ions formed per unit time is greater. On the screen these areas are represented in the form of bright spots. In other words, the formation of a contrast image of the surface is determined by the presence of local microscopic relief near it. The ion current—and consequently the brightness and contrast of the image—increases with the gas pressure, which, however, usually does not exceed ~ 0.001 mm of mercury in a field-ion microscope; gas discharge begins at higher pressure.

The resolving power of a field-ion microscope depends primarily on the components of the thermal velocities of the ions that are tangential with respect to the surface of the tip and on the field intensity near the point. In contrast to the field-emission microscope, the influence of diffraction on resolution in a field-ion microscope is relatively small, as a result of the much greater mass of the jons as compared to electrons. In addition, the resolution of a field-ion microscope depends significantly on the polarizability α of the atoms or molecules of the working gas; gases with low α (hydrogen or helium) are most suitable for use in a field-ion microscope. Most gas particles reach the surface of the tip without undergoing ionization. At ordinary temperatures they then leave the surface, with significant tangential velocity components. When the tip is cooled to the temperature of liquid hydrogen or nitrogen (20°-78°K) the unionized molecules “adhere” to it for a time, losing their own kinetic energy. Their ionization takes place after vaporization from the point (for helium, at a distance of 5 Å from it; the local distribution of the field at this distance from the surface reveals very well the atomic structure of the tip).

Field-ion microscopes are used extensively in studying the atomic structure of pure metals and various alloys and its relation to their mechanical properties; all types of defects in crystals, particularly dislocations and damage caused by radioactive irradiation; and the effect of processing methods, such as plastic deformations, on the properties of materials. They are also used to study the processes of corrosion, adsorption, and desorption and the properties of fine films deposited on the surfaces of metals. Comparison of the results of research with field-emission and field-ion microscopes makes it possible to obtain significant data on the electron properties of metals, alloys, and film systems that are exceedingly important in modern electronics. Projects that have the goal of studying the structure of biological molecules by means of field-ion microscopes are under way.

[¦fēld ¦ī‚än ′mī·krə‚skōp]
(electronics)
A microscope in which atoms are ionized by an electric field near a sharp tip; the field then forces the ions to a fluorescent screen, which shows an enlarged image of the tip, and individual atoms are made visible; this is the most powerful microscope yet produced. Also known as ion microscope.
McGraw-Hill Dictionary of Scientific & Technical Terms, 6E, Copyright © 2003 by The McGraw-Hill Companies, Inc.