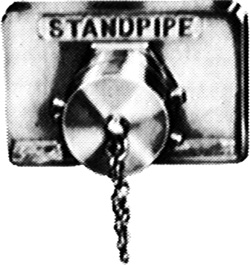 standpipe connection
A pipe or tank used for the storage of water, esp. for emergency use.
McGraw-Hill Dictionary of Architecture and Construction. Copyright © 2003 by McGraw-Hill Companies, Inc.

Feedback
Flashcards & Bookmarks ?
Please log in or register to use Flashcards and Bookmarks. You can also log in with
Flashcards ?
My bookmarks ?
+ Add current page to bookmarks
Mentioned in ?
References in periodicals archive ?
Several years ago our community of eight homes on Washington's Orcas Island, northwest of Seattle, had a major wildfire problem: homes on a steep mountainside, south-facing (meaning dry) slopes, a heavy fuel load from major winter blowdowns, brush-clogged roads, just one route in and out, and only several fire standpipes. Our area has been designated one of the state's potential wildfire hotspots.
Five hot tips for homeowners on the edge