cinquefoil (sĭngkˈfoil) [O.Fr.,=five leaves], name for any plant of the widely distributed genus Potentilla of the family Rosaceae (rose family), chiefly herbs of north temperate and subarctic regions. Most cinquefoils are perennial; many but not all of them have leaves of five leaflets, for which they are also called five-finger. The flowers are most often yellow. Most North American species are native to cooler regions of the W United States. The shrubby cinquefoil (P. fruticosa) and the silverweed (P. anserina) are common wildflowers in the West and the Northeast; they are thought to be naturalized from the Old World. These and other species are sometimes cultivated in rock gardens. Silverweed is one of the species reputed to have medicinal powers, hence the Latin name of the genus [potens=powerful]. Cinquefoil is classified in the division Magnoliophyta, class Magnoliopsida, order Rosales, family Rosaceae.
The Columbia Electronic Encyclopedia™ Copyright © 2022, Columbia University Press. Licensed from Columbia University Press. All rights reserved.

A five-lobed pattern divided by cusps. 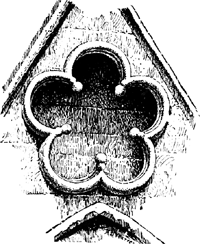 1. any plant of the N temperate rosaceous genus Potentilla, typically having five-lobed compound leaves
2. an ornamental carving in the form of five arcs arranged in a circle and separated by cusps
Collins Discovery Encyclopedia, 1st edition © HarperCollins Publishers 2005