, symbolic cloth
flag, piece of cloth, usually bunting or similar light material, plain, colored, or bearing a device, varying in size and shape, but often oblong or square, used as an ensign, standard, or signal or for display and decorative purposes, and generally attached at one edge to a staff or to a halyard by which it may be hoisted. The part of the flag attached to the staff or halyard is the hoist; the portion from the attached part to the free end is the fly; the top quarter of the flag next to the staff is the canton.

In the British colonies of North America before the Revolution, each of the 13 colonies had its flag. On Jan. 2, 1776, the first flag of the United States was raised at Cambridge, Mass., by George Washington. Known as the Grand Union flag, it consisted of 13 stripes, alternate red and white, with a blue canton bearing the crosses of St. George and St. Andrew. Congress, on June 14, 1777, enacted a resolution “that the Flag of the United States be 13 stripes alternate red and white, that the Union be 13 stars white in a blue field representing a new constellation.” The story of Betsy Ross and the first flag is now discredited. Official records have not confirmed that she was responsible for the design and making of the first flag, and suggest that Francis Hopkinson may have designed it.

On Jan. 13, 1794, Vermont and Kentucky having been admitted to the Union, Congress added a stripe and a star for each state. Congress in 1818 enacted that the 13 stripes, denoting the 13 original colonies, be restored and a star added to the blue canton for each state after its admission to the Union. All of the states and territories of the United States also have their own flags.

The International Code flags and pennants enable mariners to communicate regardless of differences of language. In the armies and navies of the various nations of the world, flags are used for signaling. The white flag is used universally for truce; the black in early times was a symbol for piracy; the red symbolizes mutiny or revolution; the yellow is a sign of infectious diseases. Shipping lines have their own flags. Striking a flag signifies surrender, and the flag of a victor is hoisted above that of the vanquished. A flag flown at half-mast is the symbol of mourning. The inverted national ensign is a signal of distress.

Symbolical standards were used by the ancient Egyptians, Assyrians, and Jews. Biblical references to standards, ensigns, and banners are numerous. Early flags usually had a religious significance. The Dannebrog of Denmark, a red ensign that is swallow-tailed and bears a white cross, is no doubt the oldest flag design still in use. In France the Cape de St. Martin, originally kept in Marmoutier abbey, was borne upon the standards of the early kings, but this was succeeded by the oriflamme, the ancient banner of the abbey of St. Denis. The oriflamme was later replaced by the Bourbon white flag sprinkled with fleurs-de-lis, which in turn was succeeded by the tricolor at the time of the Revolution. William the Conqueror received his banner from the pope, and the ensign of Great Britain, the Union Jack (or Union Flag), is formed by the crosses of St. George, St. Andrew, and St. Patrick, the national saints, respectively, of England, Scotland, and Ireland.

In medieval times there were numerous flags in use—banners, banderoles, gonfalons, gonfanons, pennons, pennoncells, standards, streamers, and guidons. The banner, usually quadrangular in shape, was a battle flag bearing the arms of the person entitled to carry it. The banderole was smaller in size than the banner. The gonfalon and the gonfanon, also battle flags, were hung from a crosspiece attached to a staff or spear. The pennon was a long triangular flag, generally swallow-tailed, used as a knight bachelor's ensign. The pennoncell was a small pennon used for ceremonial purposes. The standard, used by nobles on ceremonial occasions, was a long, narrow flag, tapering toward the free end and richly decorated. The royal standard of today is derived from the medieval banner; it bears the royal arms and is smaller than the national flag, or ensign. The streamer was a long, narrow flag, tapering toward the fly, and generally carried at the masthead of a vessel. It has been replaced by the present-day pennant (or pendant, as it was earlier called and is still called in the British navy). The guidon was carried by cavalry; today it is used by the U.S. army for practically all units in dress parade and as a distinguishing flag.

the official identifying symbol of a country, the design of which is established by law, usually by a constitution. The national flag, a symbol of a state’s sovereignty, is a piece of cloth of one or more colors, displaying an official seal or other emblem.

The Constitution of the USSR describes the national flag of the USSR as a red rectangular piece of cloth displaying, in the upper corner near the staff, a gold hammer and sickle under a red five-pointed star outlined in gold. The flag’s length is twice its width. Descriptions of the flags of the Union republics are found in the republics’ respective constitutions.

The flag’s colors and emblems are not arbitrary but have a definite symbolic meaning. According to the Statute on the State Flag of the USSR, dated Aug. 19, 1955, the flag “is a symbol of the national sovereignty of the USSR and the indestructible union of workers and peasants struggling to build a communist society.” The red color symbolizes the heroic struggle of the Soviet people, led by the CPSU, to construct socialism and communism. The hammer and sickle stand for the unshakable union of the working class and the kolkhoz peasantry. The red five-pointed star is a symbol of the ultimate triumph of the ideas of communism on the five continents of the earth.

National flags are flown over government buildings, embassies, consulates, missions, customs offices, and elsewhere. On national holidays, embassies, missions, and consulates display the flags of their home countries. Flags are also displayed at the openings of international conferences, during official ceremonies, and at the awards ceremonies of international athletic competitions.

On official holidays, the flags of the USSR and the Union republics are displayed over buildings of national and local governmental institutions, enterprises, and public organizations. In foreign countries they are flown over USSR embassies, consulates, missions, and buildings housing trade delegations; at home they are also displayed at railroad stations, harbors, and terminals, on ships of the navy and merchant fleet of the USSR, and at private dwellings.

[flag]
(computer science)
Any of various types of indicators used for identification, such as a work mark, or a character that signals the occurrence of some condition, such as the end of a word.
(electronics)
A small metal tab that holds the getter during assembly of an electron tube.
(engineering)
A piece of fabric used as a symbol or as a signaling or marking device.
A large sheet of metal or fabric used to shield television camera lenses from light when not in use.
McGraw-Hill Dictionary of Scientific & Technical Terms, 6E, Copyright © 2003 by The McGraw-Hill Companies, Inc. 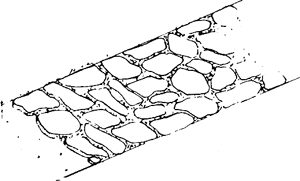 flagstone: paved walk
A flat stone, usually 1 to 4 in. (2.5 to 10 cm) thick, used as a stepping-stone or for terrace or outdoor paving; usually either naturally thin or split from rock that cleaves readily; sometimes produced by sawing.
McGraw-Hill Dictionary of Architecture and Construction. Copyright © 2003 by McGraw-Hill Companies, Inc.

A small brightly colored plate inside a certain airborne navigation, or a flight instrument, that comes into view to indicate the malfunction of a system or the instrument itself. It also can indicate that the signal strength or quality of the received signal has fallen below the acceptable values. Also called a flag alarm.
An Illustrated Dictionary of Aviation Copyright © 2005 by The McGraw-Hill Companies, Inc. All rights reserved

2
1. an indicator, that may be set or unset, used to indicate a condition or to stimulate a particular reaction in the execution of a computer program
2. Informal short for flag officer flagship
3. the fringe of long hair, tapering towards the tip, on the underside of the tail of certain breeds of dog, such as setters
4. the conspicuously marked tail of a deer
5. Austral and NZ the part of a taximeter that is raised when a taxi is for hire
6. Economics the pennant-shaped pattern that is formed when a price fluctuation is plotted on a chart, interrupting the steady rise or fall that precedes and then follows it
7. show the flag to assert a claim, as to a territory or stretch of water, by military presence

2
1. any of various plants that have long swordlike leaves, esp the iris Iris pseudacorus (yellow flag)
2. the leaf of any such plant
Collins Discovery Encyclopedia, 1st edition © HarperCollins Publishers 2005

(programming)
A variable or quantity that can take on one of two values; a bit, particularly one that is used to indicate one of two outcomes or is used to control which of two things is to be done. "This flag controls whether to clear the screen before printing the message." "The program status word contains several flag bits." See also hidden flag, mode bit.

(1) In communications, a code in the transmitted message which indicates that the following characters are a control code and not data.

(2) In programming, a "yes/no" indicator used to represent the current status of something. A flag is often only one bit of the byte and is created and controlled by the programmer in software. When only a single bit is used, eight flags, or status conditions, can be represented by one byte. Flags can also be built into and turned on and off by hardware, in which case the software is used only to read the flag to determine the current condition of the device.

(3) A Unix command line argument. The symbol is a dash. For example, in the command head -15 filex, which prints the first 15 lines of the file FILEX, the -15 flag modifies the Head command.

(4) To identify an element of data or a process by embedding a code (flag) in it.
Copyright © 1981-2019 by The Computer Language Company Inc. All Rights reserved. THIS DEFINITION IS FOR PERSONAL USE ONLY. All other reproduction is strictly prohibited without permission from the publisher.