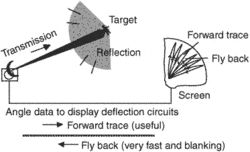 The time during which CRT (cathode-ray tube) electron beams return from the end of one line to the start of the next when in rasterscan mode. The return of a scanning beam to the starting point after completing a line or a frame is called fly-back. Fly-back time is expressed in ns (nanoseconds, or one-billionth [10−9] of a second) or μs (microseconds, or one-millionth of a second) for each fly-back period.

The line followed by the beam of electrons in a cathode-ray tube after it ends one line and returns to the start of the next line. Also called a fly-back
An Illustrated Dictionary of Aviation Copyright © 2005 by The McGraw-Hill Companies, Inc. All rights reserved

Feedback
Flashcards & Bookmarks ?
Please log in or register to use Flashcards and Bookmarks. You can also log in with
Flashcards ?
My bookmarks ?
+ Add current page to bookmarks
Mentioned in ?
References in periodicals archive ?
Two companies- Lockheed Martin and Starcraft Boosters - hold patents for fly-back boosters.
A group had successfully tested a sub-scale fly-back booster based on Aldrin's design in 2001-02.
U.S. Air Force plans to make rocket that can fly back to its base
Summary: Opting for the vigour of black, the ww.tc Shadow's dynamism makes it a hit with technical novelties enthusiasts: its case is made from black ceramic, while the Girard-Perregaux movement features the original combination of a fly-back chronograph with the world times display.
Girard perregaux announces the middle east launch of ww.tc shadow