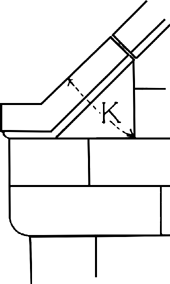 kneeler, 1: K
1. A building stone which is sloped on top and flat on the bottom, as the stone that supports inclined coping on the slope of a gable. Also see footstone; gable springer.
2. The stone that breaks the horizontal-vertical unit-and-joint pattern of a normal masonry wall to begin the curve or angle of an arch or vault.
McGraw-Hill Dictionary of Architecture and Construction. Copyright © 2003 by McGraw-Hill Companies, Inc.

Feedback
Flashcards & Bookmarks ?
Please log in or register to use Flashcards and Bookmarks. You can also log in with
Flashcards ?
My bookmarks ?
+ Add current page to bookmarks
Mentioned in ?
References in periodicals archive ?
Smith also demonstrates that the marble footstone marking the site of the "sasso" itself was moved several times in the 19th century, finally resting in a position assumed to be near that of the original.
Graham Smith. The Stone of Dante and Later Florentine Celebrations of the Poet
Volunteers will probe cemetery to look for buried headstones and footstones, remove vegetation and place new marker bases; bring drinking water, gloves, Weedeater or shovel; equipment for probing will be provided; no restroom on site; 541-321-0798 or www.lupercemetery.com.
COMMUNITY
36-37) history of the Old Capitol Building recorded the quarry site as "Mississippi Springs, a small antebellum resort east of Raymond." State architect William Nichols inspected the quarry in September of 1836 and found that the stone mason "had been diverting stone quarried for the state house to other purposes." "Nichols reported: 'the ground around the quarry is covered with headstones and footstones ...
Geology and geography
The footstones from the graves in Kensal Green had also been shipped over and are now in place in Sleepy Hollow.
Nathaniel and Sophia reunited after 142 years
GRAVEYARD headstones were almost turned into FOOTSTONES due to a bizarre decision to put them at the bottom of graves.
Council's grave error
of Winnsboro for a set of granite headstones and footstones, Brooks said.
SCDC provides proper burial for inmates with no survivors
The small footstones were later thrown out or moved because they "offended 19th century sensibilities,'' she said, and made it difficult for those caring for the cemetery to mow.
Grave concerns addressed; Cemetery evolution presented in Princeton