forging, shaping metal by heating it and then hammering or rolling it. Forging is the method by which metal was first worked when it came into use about 4000 B.C. in Egypt and Asia. Modern forging is done with a power-driven hammer; Dies are usually used. These are steel blocks hollowed out or carved in relief in the shape of the desired part. One die is stationary, the other is attached to the underside of a hammer or press ram. A piece of metal is then hammered or squeezed until it takes on the shape of the die cavity. Sometimes there are several sets of dies that form the metal in stages into the final shape. Smaller parts may be forged cold; larger parts, hot. Maximum pressure exerted is about 100 tons per square inch. Variations of the forging process are called sizing, heading, and coining. Some industrial machines for forging are the drop hammer, steam hammer, and hydraulic press. Forging toughens iron and steel, while casting makes them brittle.
The Columbia Electronic Encyclopedia™ Copyright © 2022, Columbia University Press. Licensed from Columbia University Press. All rights reserved.
The following article is from The Great Soviet Encyclopedia (1979). It might be outdated or ideologically biased.

one of the methods of pressure shaping, in which the tool exerts repeated intermittent action on the stock, which as a result is deformed and acquires the desired shape and dimensions.

Since ancient times, forging of copper and native iron has been one of the main methods of metalworking (cold and later hot forging in Iran, Mesopotamia, and Egypt in the fourth and third millennia B.C.; cold forging by Indians in North and South America before the 16th century A.D.). The ancient metallurgists in Europe, Asia, and Africa forged blooming iron, copper, silver, and gold. The smiths enjoyed the special respect of the ancients, and their art was surrounded by legends. During the Middle Ages forging attained a high level in many countries, including Russia: smith forging was used in the production of weapons and firearms, tools, parts of agricultural equipment, and hardware for doors, chests, grates, lanterns, locks, clocks, and other articles of a variety of shapes and sizes, frequently containing very small parts. Forged articles were decorated with inlays, cut-out or relief patterns, and gold and bronze leaf flattened into extremely thin layers. The traditions of medieval skills were preserved in folk art until the 19th century (lanterns, hooks, candle holders, and other articles). Numerous remarkable forged lamps, fences, and gates were produced during the 15th to 19th centuries (Versailles, St. Petersburg, and Tsarskoe Selo). Many towns specialized in various branches of the blacksmith’s craft: Herat and Mosul were famous for household utensils; Damascus, Milan, Augsburg, Astrakhan, and Tula, for arms; Nottingham, Solingen, and Pavlovo na Oke, for knives and tools; and Nuremberg and Kholmogory, for locks. During the 19th century, manual artistic forging was replaced by stamping and casting, but interest in this area was revived during the 20th century (the work of F. Kühn in the GDR and of I. S. Efimov and V. P. Smirnov in the USSR; and the design of interiors of public buildings in Tallinn, Kaunas, and other cities).

A distinction is made between die forging and free forging (without dies). In die forging the metal is limited on all sides by the walls of the die impression, and upon deformation it acquires the shape of the impression. In manual or mechanical free forging the metal is either not limited at all or is limited only on one side. Smith forging involves direct action on the metal or tool with a sledge or hammer. Mechanical forging is performed with special equipment, such as hammers with dropping components weighing 1–5,000 kg or hydraulic presses that develop forces of 2–200 meganewtons (MN), or 200–20,000 tons-force (tf), as well as forging machines. Forgings weighing as much as 100 tons are produced. Heavy billets are handled by cranes (with lifting capacities of up to 350 tons), turners, and special manipulators.

Free forging is used to improve the quality and structure of the metal. Forging of a metal leads to its strengthening through curing of discontinuities and reduction of the size of large crystals, which leads to the formation of a fine-grained, fibrous crystalline structure.

An assortment of blacksmith’s tools, which impart the desired shape and dimensions to the stock, are used in forging. The main forging operations are swaging, upsetting, hot drawing, peening, rolling, and broaching.

Forging is one of the most economical methods for the production of blanks. Die forging is mainly used in mass and large-batch production, and free forging is predominant in small-batch and piece production.

[′fȯrj·iŋ]
(metallurgy)
Using compressive force to shape metal by plastic deformation; dies may be used.
A piece of work made by forging.
McGraw-Hill Dictionary of Scientific & Technical Terms, 6E, Copyright © 2003 by The McGraw-Hill Companies, Inc.

The plastic deformation of metals, usually at elevated temperatures, into desired shapes by compressive forces exerted through a die. Forging processes are usually classified either by the type of equipment used or by the geometry of the end product. The simplest forging operation is upsetting, which is carried out by compressing the metal between two flat parallel platens. From this simple operation, the process can be developed into more complicated geometries with the use of dies. A number of variables are involved in forging; among major ones are properties of the workpiece and die materials, temperature, friction, speed of deformation, die geometry, and dimensions of the workpiece.

Some of the terminology in forging is shown in the illustration. Draft angles facilitate the removal of the forging from the die cavity. The purpose of the saddle or land in the flash gap is to offer resistance to the lateral flow of the material so that die filling is encouraged. Die filling increases as the ratio of land width to thickness increases up to about 5; larger ratios do not increase filling substantially and are undesirable due to increased forging loads and excessive die wear. The purpose of the gutter is to store excess metal. The flash is removed either by cold or hot trimming or by machining. 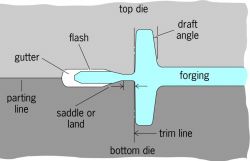 A number of methods produce the necessary force and die movement for forging. Two basic categories are open-die and closed-die forging. Drop hammers supply the energy through the impact of a failing weight to which the upper die is attached. Another type of forging equipment is the mechanical press. For large forgings the hydraulic press is the only equipment with sufficient force. However, the speed for such presses is about one-hundredth that of hammers. See Metal forming

A metal part, worked to a predetermined shape by one or more of such processes as hammering, upsetting, pressing, or rolling.
McGraw-Hill Dictionary of Architecture and Construction. Copyright © 2003 by McGraw-Hill Companies, Inc.

Feedback
Flashcards & Bookmarks ?
Please log in or register to use Flashcards and Bookmarks. You can also log in with
Flashcards ?
My bookmarks ?
+ Add current page to bookmarks
Mentioned in ?
References in periodicals archive ?
Ruth Murday, associate solicitor at Hawkins Hatton, said: "Victoria Drop Forgings is a traditional manufacturing company that has become synonymous with industries in the Black Country over the years.
New future forged for historic firm; LEGAL
In all cases, the forging velocity was of 30mm/min, and the maximum compression force was fixed at 1800 kN because the hydraulic press control selected was by force instead of variable position.
Analysis on the manufacturing of an AA5083 straight blade previously ECAE processed
Why, then, do the critical components of Gen 3 plants require ultra-heavy forging?
Heavy duty: new nuclear reactors require pressure vessels that are several stories tall and weigh hundreds of tons. What would it take to make one in the U.S.?
"We're able to reduce the amount of materials we're putting into net-shape forging, and that material isn't just scrap and chips going into the hopper," explained Ken Tuchel, senior vice president of implant sales and marketing for Symmetry Medical's Lansing, MI-based implant division.
Forging coalitions: net-shape forging grows in popularity as raw materials become more expensive
They mainly examine stress concentration and propagation of the plastic zone in the fillet area as applied forging pressure increases.
A review on cold forging die design and die design process
Chapter 2 Forging Market Segment Analysis by Player
Forging Market 2019 Global Trends, Market Share, Industry Size, Growth, Opportunities, and Market Forecast to 2025
The press can also be used for forging in a conventional manner if the recommended forces shown in Fig.
Mechanical Forging Press for Progressive Working in Automatic Process
The development of a CAD' model of forging die and conversion of sharp corners / edges in the cavity to fillets, of possibly optimum sized radii, were done through suitable Designing and Simulation' tools.
INCREASING THE LIFE OF HOT FORGING DIE OF AN AUTOMOTIVE PART
The company's first partnership is with the Harold A O'Neil Company, a manufacturers' representative agency for open die forged products and which since 1962 has been providing castings, forgings and machining to the oil tool, petrochemical and other industries in the South western US.
Ampco-Pittsburgh signs two new partnerships for support of its subsidiary and Forged and Cast Engineered Products segment
Critique: An exceptional combination of history and instruction manual for the hydraulic forging press, Randy McDaniel's "Hydraulic Forging Press for the Blacksmith" is profusely illustrated, notably well organized and presented, with an informed and informative text that is exceptionally accessible, making it ideal for those needing to learn how to operate an hydraulic forging press and all the things that it can do in a manufacturing process.
Hydraulic Forging Press for the Blacksmith
The Michigan Manufacturing International metal forging partner is the largest Asian manufacturer of MW-grade wind power shaft products.
Michigan Manufacturing International Offering Comprehensive Suite of Metal Forging Solutions