(redirected from found its own level)
Also found in: Dictionary, Thesaurus, Medical, Financial.

spirit level, tool for determining whether a surface is horizontal. It consists essentially of a slightly bent transparent tube that is held in a frame. The tube contains some alcohol, ether, or similar fluid but is not entirely filled, so that it also contains a small bubble. The position of the bubble within the tube indicates whether the instrument is horizontal. The spirit level used by carpenters and masons has two tubes at right angles to each other, so that the device registers a vertical as well as a horizontal position. The plumb line was used to determine vertical position from ancient times until the 19th cent. At that time the spirit level, which was invented in France during the 17th cent., came into general use and replaced the plumb line in some applications.
The Columbia Electronic Encyclopedia™ Copyright © 2022, Columbia University Press. Licensed from Columbia University Press. All rights reserved.
The following article is from The Great Soviet Encyclopedia (1979). It might be outdated or ideologically biased. 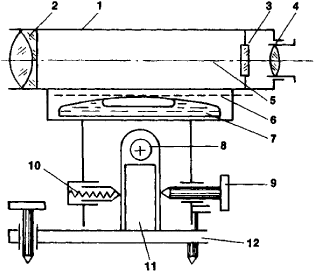 [′lev·əl]
(civil engineering)
A surveying instrument with a telescope and bubble tube used to take level sights over various distances, commonly 100 feet (30 meters).
To make the earth surface horizontal.
(communications)
A specified position on an amplitude scale (for example, magnitude) applied to a signal waveform, such as reference white level and reference black level in a standard television signal.
(computer science)
The status of a data item in COBOL language indicating whether this item includes additional items.
channel
(design engineering)
A device consisting of a bubble tube that is used to find a horizontal line or plane. Also known as spirit level.
(electricity)
A single bank of contacts, as on a stepping relay.
(electronics)
The difference between a quantity and an arbitrarily specified reference quantity, usually expressed as the logarithm of the ratio of the quantities.
A charge value that can be stored in a given storage element of a charge storage tube and distinguished in the output from other charge values.
(mining engineering)
Mine workings that are at the same elevation.
A gutter for the water to run in.
(statistics)
In factorial experiments, the quantitative or qualitative intensity at which a particular value of a factor is held fixed during an experiment.
McGraw-Hill Dictionary of Scientific & Technical Terms, 6E, Copyright © 2003 by The McGraw-Hill Companies, Inc.

1. A surveying instrument for measuring heights with respect to an established horizontal line of sight; consists of a telescope and attached spirit level, a rotatable mounting, and a tripod. Also see wye level and dumpy level.
2. The position of a line or plane when parallel to the surface of still water.
3.See spirit level.
4. Of an acoustical quantity, 10 times the logarithm (base 10) of the ratio of the quantity to a reference quantity of the same physical kind.
McGraw-Hill Dictionary of Architecture and Construction. Copyright © 2003 by McGraw-Hill Companies, Inc.

i. A generic term relating to vertical position of an aircraft in flight and meaning variously, height, altitude, or a flight level (ICAO).
ii. To bring an aircraft into a horizontal line of flight, such as in to level off or level out.
An Illustrated Dictionary of Aviation Copyright © 2005 by The McGraw-Hill Companies, Inc. All rights reserved

1. Engineering a device, such as a spirit level, for determining whether a surface is horizontal
2. Geography any of the successive layers of material that have been deposited with the passage of time to build up and raise the height of the land surface
3. Physics the ratio of the magnitude of a physical quantity to an arbitrary magnitude
Collins Discovery Encyclopedia, 1st edition © HarperCollins Publishers 2005