Geometrical objects that are self-similar under a change of scale, for example, magnification. The concept is helpful in many disciplines to allow order to be perceived in apparent disorder. For instance, in the case of a river and its tributaries, every tributary has its own tributaries so that it has the same structure organization as the entire river except that it covers a smaller area. The branching of trees and their roots as well as that of blood vessels, nerves, and bronchioles in the human body follows the same pattern. Other examples include a landscape with peaks and valleys of all sizes, a coastline with its multitude of inlets and peninsulas, the mass distribution within a galaxy, the distribution of galaxies in the universe, and the structure of vortices in a turbulent flow. The rise and fall of economic indices has a self-similar structure when plotted as a function of time.

The triadic Koch curve, shown in the illustration, is a good example of how a fractal may be constructed. The procedure begins with a straight segment. This segment is divided into three equal parts, and the (single) central piece is replaced by two similar pieces (illus. a). The same procedure is now applied to each of the four new segments (illus. b), and this is repeated an infinite number of times. The curve is self-similar, because a magnification by 3 of any portion will look the same as the original curve. 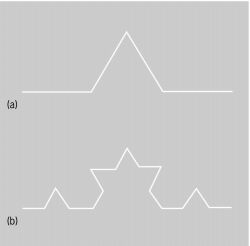 Koch curve, (a) first and (b) second stages

Fractals came into natural sciences when it was recognized that natural objects are random versions of mathematical fractals. They are self-similar in a statistical sense; that is, given a sufficiently large number of samples, a suitable magnification of a part of one sample can be matched closely with some member of the ensemble. Unlike the Koch curve which must be magnified by an integral power of 3 to achieve self-similarity, natural fractal objects are usually self-similar under arbitrary magnification.

Physicists have used the concept of fractals to study the properties of amorphous solids and rough interfaces and the dynamics of turbulence. It has also been found useful in physiology to analyze the heart rhythm and to model blood circulation, and in ecology to understand population dynamics. In computer graphics it has been shown that the vast amount of information contained in a natural scene can be compressed very effectively by identifying the basic set of fractals therein together with their rules of construction. When the fractals are reconstructed, a close approximation of the original scene is reproduced. See Amorphous solid

With regard to computer graphics, fractals are a lossy compression method used for color images. Providing ratios of 100:1 or greater, fractals are especially suited to natural objects, such as trees, clouds and rivers. Fractals turn an image into a set of data and an algorithm for expanding it back to the original.

Stemming from "fractus," which is Latin for broken or fragmented, the term fractals was coined by IBM Fellow and doctor of mathematics Benoit Mandelbrot, who expanded on ideas from earlier mathematicians and discovered similarities in chaotic and random events and shapes. Mandelbrot determined that there are repeating patterns in the architecture of nature.

As Gregg Braden put it in his extraordinary book "Fractal Time, The Secret of 2012 and a New World Age," which deals with patterns and predictions leading to the present era: "Nature uses a few simple, self-similar, and repeating patterns-- fractals --to build energy and atoms into the familiar forms of everything from roots, rivers, and trees, to rocks, mountains, and us."
Copyright © 1981-2019 by The Computer Language Company Inc. All Rights reserved. THIS DEFINITION IS FOR PERSONAL USE ONLY. All other reproduction is strictly prohibited without permission from the publisher.

Feedback
Flashcards & Bookmarks ?
Please log in or register to use Flashcards and Bookmarks. You can also log in with
Flashcards ?
My bookmarks ?
+ Add current page to bookmarks
Mentioned in ?
References in periodicals archive ?
The Authors focused on the comparison between the original fractal approach and the Gaussian one, based on the so-called Gaussian bell.
A fractal is a geometric object that repeats itself in the same structure on different scales and/or timings, showing repeating patterns.
FRACTALS--A SMART FINANCIAL TOOL TO ASSESS BUSINESS MANAGEMENT DECISIONS
Based on the geometry fractal characteristics of coals, Friesen and Mikula [29] proposed an equation to calculate fractal dimension which can be expressed as
The fractal dimension [D.sub.f] was calculated by plotting [dS.sub.Hg]/[dp.sub.c] verse [p.sub.c] in a log-log plot.
Fractal Analysis of Microscale and Nanoscale Pore Structures in Carbonates Using High-Pressure Mercury Intrusion
When the fractal figure covers the fractal curve image with a square lattice of a certain scale, some of the mesh may contain part of the curve, while other parts of the mesh remain empty, with the number of nonempty mesh increasing as the mesh side length gradually reduces.
In this paper, [D.sub.D] is the fractal dimension of pore distribution.
Micropore Structure and Fractal Characteristics of Low-Permeability Coal Seams
In addition, it opens new possibilities of exploring the potential applicability of nonextensive statistics in the domain of hadronic physics and, hopefully, allows for a deeper understanding of the properties of QCD that make self-similarity and fractal structures emerge from the strong interaction in complex system.
In a thermodynamical approach, the application of the nonextensive self-consistent thermodynamics that arises from the fractal structure when applied to hadronic systems has gone already beyond the usual description of high energy distributions and has been extended to systems with finite chemical potential [44, 45], to extend the MIT Bag model by including a fractal structure [46] and to describe neutron star equilibrium [47].
Renormalization Group Equation for Tsallis Statistics
Quantification of this complexity by only the visual aspects is difficult, and for this reason, the fractal dimension is calculated (de Oliveira et al.
The logarithmic ratio of the change in the number of grids to the change in the grid size gives the fractal dimension values (Eq.
ASSESSMENT OF URBAN SPRAWL USING SHANNON'S ENTROPY AND FRACTAL ANALYSIS: A CASE STUDY OF ATAKUM, ILKADIM AND CANIK (SAMSUN, TURKEY)
To illustrate the fractal function of (1) for different values of fractal dimension D, some representative simulations of that are shown in Fig.
Characterization of three-dimensional rough fractal surfaces from backscattered radar data
The scaling relationship of the length L and the tortuosity fractal dimension [D.sub.t] by using the formula [mathematical expression not reproducible] was given by Wheatcraft and Tyler [25], where e is the length scale of measurement.
Fractal Model for Acoustic Absorbing of Porous Fibrous Metal Materials