in chemistry, a molecule or atom that contains an unpaired electron but is neither positively nor negatively charged. Free radicals are usually highly reactive and unstable. They are produced by homolytic cleavage of a covalent bond (see chemical bondchemical bond,
mechanism whereby atoms combine to form molecules. There is a chemical bond between two atoms or groups of atoms when the forces acting between them are strong enough to lead to the formation of an aggregate with sufficient stability to be regarded as an
..... Click the link for more information. ); i.e., each of the atoms connected by the bond retains one of the two electrons making up the bond. The homolytic cleavage of a hydrogen molecule, H2, produces two hydrogen free radicals (hydrogen atoms). Similarly, two chlorine free radicals can be produced from a chlorine molecule. Homolytic cleavage of the carbon-bromine bond in methyl bromide, CH3Br, would produce a methyl free radical and a bromine free radical. The term free is often dropped in referring to free radicals; this could lead to confusion if the term radical were used synonymously with group in organic chemistry, e.g., by calling an alkyl group an alkyl radical when free radical was not intended.
The Columbia Electronic Encyclopedia™ Copyright © 2013, Columbia University Press. Licensed from Columbia University Press. All rights reserved. www.cc.columbia.edu/cu/cup/
The following article is from The Great Soviet Encyclopedia (1979). It might be outdated or ideologically biased.

a kinetically independent species characterized by the presence of an unpaired electron. For example, among the inorganic free radicals with one electron in the outer shell are atoms of hydrogen (H˙), alkali metals (Na˙ K˙), and halogens (CI˙, Br˙, F˙, I˙), as well as molecules of nitrogen oxide, NO, and dioxide, ˙NO2 (the dot denotes an unpaired electron). Free radicals are most widely distributed in organic chemistry, where they are classified as short-lived (reactive) or long-lived (stable). Short-lived alkyl (R˙) and aryl (Ar˙) radicals with a lifetime of less than 0.1 sec are formed during homolytic scission of various chemical bonds.

The alkyl radicals methyl (ĊH3) and ethyl (CH3ĊH2) were discovered in 1929 by F. Paneth upon thermal dissociation of tetramethyl and tetraethyl lead in the gaseous phase. Shortlived free radicals are characterized by the reactions of recombination (1), combination (2), and disproportionation (3), which take place at very high rates:

C. Hinshelwood and N. N. Semenov pointed out the important role of short-lived free radicals in chain reactions, whose mechanism includes the abovementioned types of reactions.

A substantial number of free radicals belong to the long-lived, or stable, category. The lifetime of these radicals ranges from several minutes to several months or even years, depending on conditions (for example, the presence or absence of moisture and atmospheric oxygen). The main reasons for the higher stability of these free radicals are the partial loss of activity by an unpaired electron as a result of its interaction with many atoms in the molecule (the “delocalization” of an unpaired electron) and the poor accessibility of the atom carrying an unpaired electron because of its screening by neighboring atoms.

The first stable free radical, triphenylmethyl, (C6H5)3Ċ, was obtained in 1900 by the American chemist M. Gomberg by reacting silver with triphenylmethyl bromide. The stability of this radical is associated with the delocalization of an unpaired electron with respect to all the atoms, which may be formally explained by resonance between the possible electron structures: 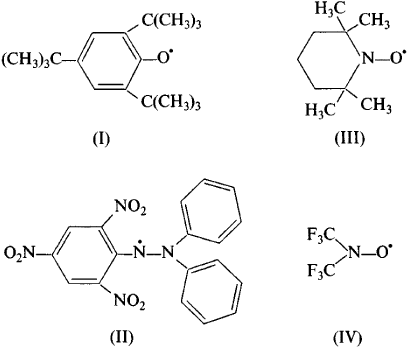 A separate group of anion radicals, which was discovered in 1932 by the German chemist L. Michaelis, is formed by the products of single-electron quinone reduction, or semiquinones, such as benzosemiquinone:

Free radicals containing two unpaired electrons that do not interact are called biradicals, or diradicals. An example of a biradical is Schlenk’s hydrocarbon: 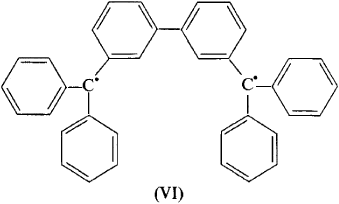 Various physicochemical methods, such as electron spectroscopy, mass spectroscopy, electrochemical methods, and nuclear magnetic resonance, are used to study free radicals. The most effective method is electron paramagnetic resonance (EPR), which may also be used to examine short-lived free radicals. EPR provides unique data on the physical nature of the unpaired electron and on the electron’s behavior in the molecule; these data are extremely valuable in carrying out calculations in quantum chemistry.

Short-lived free radicals are intermediate particles in many organic reactions (radical halogenation, sulfochlorination, metallization, the dissociation of organic peroxides, and the Wit-tig, Kolbe, and Konovalov reactions), and also in reactions that proceed under the action of ionizing radiation. Long-lived free radicals serve as stabilizers for readily oxidizing compounds and as “traps” for short-lived radicals; they are also used in numerous kinetic studies. The investigation of cation and anion radicals yields valuable information on the nature of ion interaction in solutions. Free radicals play a major role in oxidation-reduction, photochemical, and catalytic processes, as well as in important industrial processes, such as polymerization, telomerization, pyrolysis, cracking, combustion, explosion, and heterogeneous catalysis.

Walling, C. Svobodnye radikaly v rastvore. Moscow, 1960. (Translated from English.)
Semenov, N. N. O nekotorykh problemakh khimicheskoi kinetiki i reaktsionnoi sposobnosti, 2nd ed. Moscow, 1958.
Buchachenko, A. L., and A. M. Vasserman. Stabil’nye radikaly: Elektronnoe stroenie, reaktsionnaia sposobnost’ i primenenie. Moscow, 1973.
N. T. IOFFE
In biological systems, free radicals take part in many biochemical reactions as active intermediate products. The EPR method has been used to show that all actively metabolizing plant and animal cells contain free radicals in concentrations of 10-6 to 10-8 mole per gram of tissue. Free radicals play a particularly significant role in biological oxidation reactions, where they take part in the formation of electron carriers of the quinone and flavin type, which are part of membrane structures. Free radicals are also formed during peroxide oxidation of lipids in biological membranes.
Free radicals may also be produced in organisms under the action of various physical and chemical factors. In particular, the effect of radiation is associated with formation of free radicals during radiolysis of water contained in the cells (the radicals ˙OH and HO˙2), and also upon action of radiation on the molecules of organic substances and cell biopolymers. Iminoxyl free radicals are widely used in biochemical research to clarify the configuration of protein molecules (the spin labeling and paramagnetic probe methods) and the functional properties of biological membranes.

[¦frē ′rad·ə·kəl]
(chemistry)
An atom or a diatomic or polyatomic molecule which possesses one unpaired electron. Also known as a radical.
McGraw-Hill Dictionary of Scientific & Technical Terms, 6E, Copyright © 2003 by The McGraw-Hill Companies, Inc.

Feedback
Flashcards & Bookmarks ?
Please log in or register to use Flashcards and Bookmarks. You can also log in with
Flashcards ?
My bookmarks ?
+ Add current page to bookmarks
Mentioned in ?
References in periodicals archive ?
But now we know that e-cigarettes do produce free radicals, and the amount is affected by the flavourants added."
E-cigarette flavour affects a lot more than just taste
With this work, we aimed to contribute the understanding and discovery of powerful antioxidants for safe use of this herb for treatment of ailment in which free radicals are implicated.
Short Communication - PHYTOCHEMICAL INVESTIGATION AND PHARMACOLOGICAL EVALUATION OF ERYTHRAEARAMOSISSIMA
"Dr Troup was one of the first scientists to discover free radicals in coffee in 1988 and so it made sense for Illycaffe -- a ...
Health Benefits of Coffee as an Antioxidant
In mouse lungs, those free radicals can swipe electrons from cellular components, creating more reactive molecules and oxidative stress, Cormier and colleagues discovered.
Air pollution flips immune response: lowered defenses in mice lead to infections, chronic asthma
Normally, we can keep pace with the production of free radicals as long as the system isn't overwhelmed, but under certain circumstances our own antioxidants get overpowered.
How the body defends itself against free radicals
Free radical concentrations in bismuth subgallate thermally sterilized at temperatures 160[degrees]C (120 minutes), 170[degrees]C (60 minutes), and 180[degrees]C (30 minutes) are compared in Figure 6.
Electron paramagnetic resonance study of thermally treated bismuth subgallate
For instance, the immune system depends on them to help destroy bacteria but, when free radicals abound in excess, they are toxic.
Do not free the radicals
Free radicals are now widely accepted as being very important, not only in the aging process but also in numerous human diseases/disorders where they have either a primary or secondary role.
Free radicals and ageing--is there any correlation
A.: Since our bodies use oxygen, they generate free radicals, which are associated with all kinds of chronic diseases.
Antioxidants as defenders: an interview with Kedar Prasad, Ph.D
The researchers also determined the free radical scavenging activity of various non-polar compounds.
Value of free radical scavenging tests may be limited
THE EFFECTS OF TANNINS ON FREE RADICALS. Twaskia S.
The effects of tannins on free radicals
Our bodies do not take the free radical onslaught lying down.
The antioxidant defence