frostweed or frostwort, North American woodland flowers (Helianthemum canadense and sometimes other related species) of the family Cistaceae (rockrose family). In cold weather, crystals of ice shoot from the cracked bark at the base of the stem. The names frostweed and frostflower are also used for several other unrelated plants that have white flowers or bloom late (e.g., the asters). Frostweeds are classified in the division Magnoliophyta, class Magnoliopsida, order Violales, family Cistaceae.
The Columbia Electronic Encyclopedia™ Copyright © 2022, Columbia University Press. Licensed from Columbia University Press. All rights reserved. 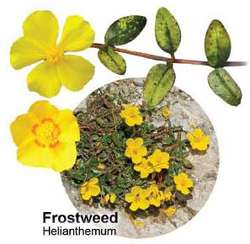 Feedback
Flashcards & Bookmarks ?
Please log in or register to use Flashcards and Bookmarks. You can also log in with
Flashcards ?
My bookmarks ?
+ Add current page to bookmarks
Mentioned in ?
References in periodicals archive ?
Dominant forbs, based on a combination of percentage of hits and biomass at peak standing crop, varied locally among giant ragweed, pigeonberry, and frostweed. Giant ragweed, the most common annual forb, was most abundant on local areas along the riverbank recently disturbed by flooding, where it grew in exclusive local colonies.
Frostweed usually has been viewed as a species typical of middle stages of succession (Tyrl et al., 2008), but a study (Thompson and McKinney, 2006) of various successional stages in a river bottomland forest in the Nashville Basin of Tennessee with similar composition and structure to the one reported herein reported frostweed to be associated with higher seral states.
Frostweed, pigeonberry, and broadleaf woodoats were important herbaceous species in a cedar elm-pecan-sugarberry forest that developed along the Brazos River (A.
Composition and structure of a mixed-hardwood bottomland forest in the West Cross Timbers of north-central Texas