[′fyül ‚sis·təm]
(mechanical engineering)
A system which stores fuel for present use and delivers it as needed.
McGraw-Hill Dictionary of Scientific & Technical Terms, 6E, Copyright © 2003 by The McGraw-Hill Companies, Inc.

The system that stores fuel for present use and delivers it as needed to an engine; includes the fuel tank, fuel lines, pump, filter, vapor return lines, carburetor or injection components, and all fuel system vents and evaporative emission control systems or devices that provide fuel supply and fuel metering functions. Some early vehicles and other engines had a gravity-feed fuel system, in which fuel flowed to the engine from a tank located above it. Automotive and most other engines have a pressurized fuel system with a pump that draws or pushes fuel from the tank to the engine. See Carburetor, Fuel injection, Fuel pump

The commonly used components for automobile and stationary gasoline engines are fuel tank, fuel gage, filter, electric or mechanical fuel pump, and carburetor or fuel-injection system. In the past, fuel metering on automotive engines was usually performed by a carburetor. However, this device has been largely replaced by fuel injection into the intake manifold or ports, which increases fuel economy and efficiency while lowering exhaust gas emissions. Various types of fuel management systems are used on automotive engines, including electronically controlled feedback carburetors, mechanical continuous fuel injection, and sequential electronic fuel injection. See Automobile

The presence of multiple engines and multiple tanks complicates the aircraft fuel system. Also, the reduction of pressure at altitude necessitates the regular use of boost pumps, submerged in the fuel tanks, which are usually of the centrifugal type and electrically driven. These supplement the engine-driven fuel supply pumps, which are usually of the gear or eccentric vane type. Components of a typical aircraft fuel system include one main and two auxiliary tanks with their gages; booster, transfer, and engine-driven pumps; various selector valves; and a fuel jettisoning or defuel valve and connection, which is typical also of what would be needed for either single-point ground or flight refueling (see illustration). The arrangement is usually such that all the fuel supply will pass to the engines by way of the main tank, which is refilled as necessary from the auxiliary tanks. In case of emergency, the system selector valve may connect the auxilary tanks to the engines directly. Tank vents, not shown, are arranged so that overflow will go safely overboard. See Aircraft engine 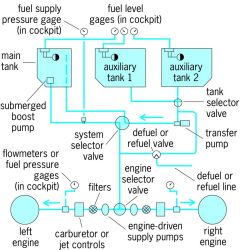 Feedback
Flashcards & Bookmarks ?
Please log in or register to use Flashcards and Bookmarks. You can also log in with
Flashcards ?
My bookmarks ?
+ Add current page to bookmarks
Mentioned in ?
References in periodicals archive ?
Release date- 08082019 - Westport Fuel Systems Inc.
Westport Fuel Systems Reports Second Quarter 2019 Financial Results
Each time owners drive their diesel vehicle; carbon deposits can build up in the fuel system and suppress the engine's performance.
Caltex Techron D Concentrate for cleaner and better performing diesel engines
For others, it's a fuel economy factor," says Worthington Industries General Manager, Alternative Fuel Systems Business Wayne Powers.
Lightweight compressed natural gas fuel system
The fuel system with improved fuel injection enables lower fuel consumption, while the high-efficiency main pump increases hydraulic system efficiency and delivers superior power, for best in class performance.
Caterpillar unveils new 320D2L hydraulic excavator
Fuel Systems Solutions is a designer, manufacturer and supplier of cost-effective alternative fuel components and systems for use in transportation and industrial applications.
IMPCO UNVEILS MY2014 CARB & BI-FUEL CNG FUEL SYSTEM
Matthew Beale, Fuel Systems' president and CFO, said, "Signing this agreement with CleanFUEL USA, an established player in the LPG alternative fuel vehicle market, is another step forward in our U.S.
FUEL SYSTEMS ENHANCES FLEET STRATEGY FOR LPG/CNG VEHICLES
Under the direction of the AAIB, extensive engine testing has been conducted at Rolls-Royce, Derby, and fuel system testing is under way at Boeing in Seattle.
Heathrow crash-landing inquiry fixes attention on fuel system: Boeing tests have to replicate high-altitude conditions over Siberia on ground in Seattle
Session 6 on testing of fuel system components will include the following presentations: "Fuel system leakage software," Emily Ho, BHR Group Ltd., U.K.; "Fuel emission testing for low emission components," Nickie Smith, MERL, U.K.; and "Diffusion and chemical resistance of reinforced polymers," Sijmon van der Wal, Diffusin polymers.com," The Netherlands.
Automotive polymers talks held
Quantum primarily attributed the increased net loss to increased operating losses incurred in its Fuel Systems segment as a result of lower product sales and contract revenues; the addition of Tecstar Automotive Group operations, which had an operating loss of $1.3 million; and a $1.2-million increase in corporate expenses.
Quantum Technologies Reports 1st-quarter Financial Results
Howard Duxbury, TI president of Global Fuel Systems, says that the investment in the Hartwell plant is the single biggest made in the history of the company, yet adds, "We would like to increase the investment by $10 million." In other words, the company sees a bright opportunity for this plant, quite possibly given the number of vehicle manufacturers that have set up significant facilities in the southeast.
TI Automotive opens $30-million plant in Georgia
But anytime you find water or other contaminants in the fuel-water separator or fuel system filter sump, here's what to do:
Generators ... they need clean fuel!
There was no justification, and certainly no necessity, for the double standard regarding fuel system integrity between cars and pickup trucks--especially considering that the original pickup was merely a modification of a standard passenger car.
Explosive cases involving defective fuel systems