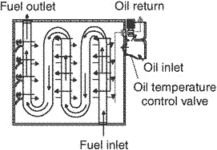 A heat exchanger in the form of a radiator, in which the fuel passes through the cooler's core while oil passes around the core. In this process, the heat of the lubricating oil is passed on to the fuel. A bypass valve (normally, a thermostatic valve), which routes the oil through the cooler only after the oil is heated up to a certain temperature, is provided in the system. Also called a fuel-oil cooler.
An Illustrated Dictionary of Aviation Copyright © 2005 by The McGraw-Hill Companies, Inc. All rights reserved

Feedback
Flashcards & Bookmarks ?
Please log in or register to use Flashcards and Bookmarks. You can also log in with
Flashcards ?
My bookmarks ?
+ Add current page to bookmarks
Mentioned in ?
References in periodicals archive ?
As a result of A1C Lee's superior performance, the aircraft did not sustain additional damage and was returned to the fight within eight hours of the fuel-oil cooler failure.
Awards of distinction
He found a leak in the fuel-oil cooler; oil was being diluted by fuel.
Bravo Zulu: sailors and marines preventing mishaps