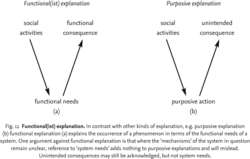 EXPLANATION of the persistence of any feature of a SOCIETY or SOCIAL SYSTEM (and at the same time an explanation for the persistence of the society or social system itself) in which this feature, usually along with others, is seen as making an essential contribution to the maintenance of the society or social system. Thus, perversely, according to some commentators, an aspect of the functionalist explanation is that the consequences of an activity are in part an explanation of its own existence.

Often functional(ist) explanation involves a recourse to organic analogies, in which societies or social systems are seen as akin to biological organisms in which specified organs can be identified which fulfil specific system ‘needs’. For example, just as the function of the heart is to circulate the blood, the indispensable function of government may be suggested as establishing and implementing ‘policies for society’ (see also FUNCTIONAL PREREQUISITES, EVOLUTIONARY SOCIOLOGY). Alternatively analogies with servo-mechanical systems may be proposed (see also SYSTEM, SYSTEMS THEORY, CYBERNETICS).

According to Hempel (1959), in so far as it proves an adequate basis for explanation, functional(ist) explanation can be a form of deductive nomological explanation (see COVERING-LAW MODEL AND DEDUCTIVE NOMOLOGICAL EXPLANATION), possessing the following characteristics (where ‘i’ stands for any item or trait, within a system 'S ’ at a time ‘t’, and where ‘c’ stands for the ‘conditions’ or 'S etting’ in which the system operates):

Criticisms of proposed examples of functional explanation are made by Hempel and others on a number of grounds:

In the same way, the ‘functions’ of a political party, where intended functions are involved, may also be quite properly referred to. But reference to latent functions or to system needs in other terms than with reference to intentions, as in ‘functional explanation’ of the above type, remains obscure; (f) that, in general, one may always ‘define’ a particular institution or trait as ‘essential’ to a particular system, but this risks becoming a ‘tautology’, and merely ‘descriptive’ rather than explanatory, unless some further independent reasons can be given for regarding the relations between the system and the institutions identified as functionally significant.

Notwithstanding such criticisms, and whatever the problems of functional explanation, functional analysis remains a common feature of sociological accounts. The notion that particular societies or social systems have particular requirements seems inescapable in sociological analysis (compare Davis, 1948), even if these cannot always be precisely specified. Whether or not these requirements should be called ‘functional’ requirements, risking misleading biological analogies, would seem to be the issue.

Feedback
Flashcards & Bookmarks ?
Please log in or register to use Flashcards and Bookmarks. You can also log in with
Flashcards ?
My bookmarks ?
+ Add current page to bookmarks
Mentioned in ?
References in periodicals archive ?
Rather than seeing the tensions between customization and standardization as expressive of an evolution from one era to the next, it may be more satisfactory to reach for a functional explanation: some things that health systems do are amenable to standardised and routinized interventions, whereas others require a more tailored approach.
Best of Both Worlds: Comment on "(Re) Making the Procrustean Bed? Standardization and Customization as Competing Logics in Healthcare"
The functional explanation of poverty connotes the backward mentality of the poor in the Third World.
Why are people poor?
They cover the intellectual roots of functionalism in linguistics, functional explanation and its uses, structure and function: a niche-constructional approach, toward a thought-based linguistics, changing language, an outline of discourse grammar, and towards an experimental functional linguistics.
Functional Approaches to Language
Despite eschewing the utility of ends or purposes in natural philosophy, Descartes frequently engages in functional explanation, which many have assumed is an essentially teleological form of explanation.
Australasian Journal of Philosophy: March 2012, Vol. 90, No. 1
But the functional explanation is that being tough in a small number of cases may cause needless disruption in them--but at the same time it produces a long-term systematic gain because it reduces the number of infringements that take place.
A final response to Menell
Dik propounded a model of linguistic analysis--Functional Grammar (henceforth FG)--aimed at providing a functional explanation, as opposed to the prevailing formalist one, for linguistic phenomena.
J. Lachlan Mackenzie and Maria de los Angeles Gomez-Gonzalez, eds. 2004: a New Architecture for Functional Grammar
The division into two types of sheet cells might have a functional explanation. In the mysid Neomysis integer, the sheet cells are arranged in populations, with each creating a separate part of the cuticle of the setae (Guse, 1980).
Role of maxilla 2 and its setae during feeding in the shrimp Palaemon adspersus (crustacea: decapoda)
(26) For a discussion of functional explanation, see JON ELSTER, THE CEMENT OF SOCIETY (1989).
The domain of preference
Marx finds the answer in the character of the productive forces." (64) This only shows, however, that growth of productive power is the fundamental notion in Marx's theory of history on the assumption that functional explanation is the fundamental form of explanation in his theory.
If You're an Egalitarian, How Come You're So Rich?
Selection is an important component of Darwin's functional explanation of the origin and extinction of species.
Expanding the explanatory base of behavior analysis via modern connectionism: selectionism as a common explanatory core
Functions are abstract entities described in the text of a functional explanation. We may explain the actual capacities of an actual physical entity in functional terms and the components that realize those functions will be real physical entities with capacities that may be explained in functional terms and are functionally apt for alternative realization in the physical domain.
Autopoiesis, agency and accident: criteria for the attribution of life. (Research Paper)
In fact, formal linguistic analyses provide abundant evidence against the functionalist claim in the form of ordinary language use which defies a functional explanation. Bickerton (1995) asks those who claim that language structure can be explained as cultural adaptation to explain how the following knowledge we have about language is a result of such adaptation.
On the dysfunctional nature of systemic functional grammar. (Language Teaching & Learning)