See active galaxy; galaxies; Galaxy.
Collins Dictionary of Astronomy © Market House Books Ltd, 2006
The following article is from The Great Soviet Encyclopedia (1979). It might be outdated or ideologically biased.

a compact, massive cluster of matter in the central part of many galaxies. The optical luminosities of galactic nuclei vary widely, and the nuclei with higher luminosities are generally brighter. The luminosity of a galactic nucleus is a few percent of the luminosity of the galaxy as a whole and is comparable, in some cases, to its total radiation. In most galaxies, the nucleus is not visible in the optical region of the spectrum. There are galaxies that have no nuclei, such as the Large and Small Magellanic Clouds—companions of our stellar system (the Milky Way)—and dwarf galaxies of the Sculptor and Fornax types.

Large ellipsoidal clusters (bulges) are observed in the center of a number of massive, quite bright (absolute stellar magnitude of less than –15) galaxies. The galactic nucleus is located within the bulge and stands out against the background as a brighter 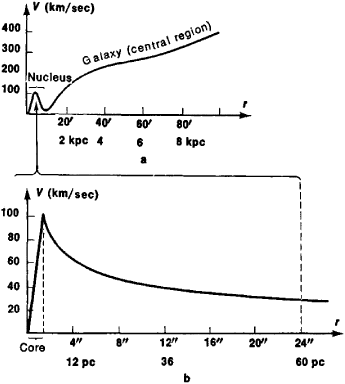 Figure 1. Rotational velocity V (km/sec) of matter in the Andromeda Nebula as a function of distance from its center (the distance r is given in seconds and minutes of arc, as well as in parsecs and kiloparsecs). (a) Rotation curve of the entire galaxy and (b) rotation curve of the central region.

formation. Stars, gas, and dust have been detected in the bulges and galactic nuclei. Starlike nucleoli, or cores, which some astronomers call galactic nuclei, can sometimes be seen inside the nuclei proper. Cores have been detected only in the four closest galaxies—in the Andromeda Nebula and its two companions and in the spiral galaxy M33. The cores measure a few parsecs across and have masses of 107−108 solar masses; their absolute stellar magnitudes range from –9 to –12. The cores rotate much faster than the central regions of the galaxies and have a flattened form (Figure 1).

Comparatively little attention was devoted to the study of galactic nuclei until the mid–20th century. In 1958, V. A. Ambart-sumian noted the special properties of galactic nuclei and the important role of nuclei in the evolution of galaxies. Interest in galactic nuclei has grown in connection with the discovery of the activity of nuclei, which is manifested in their high-power nonthermal radiation, encompassing virtually all regions of the spectrum (Figure 2), from meter wavelengths of the radio band to hard X rays (the radiation is associated with the presence of particles with extremely high energies); in the variability of the radiant flux; in the turbulent motions of the gas; and in the ejection of jets and clusters (condensations) of matter. Data on the power of the radiation of galactic nuclei at some wavelengths are given in Table 1.

Among spiral galaxies, the greatest activity of nuclei is observed in the Seyfert galaxies, and among elliptical galaxies, in N galaxies and radio galaxies (seeRADIO GALAXY). The activity of quasars, which according to current concepts are the nuclei of distant giant galaxies, is especially high (seeQUASARS). The energy sources responsible for the activity of galactic nuclei, like the processes that lead to the acceleration of charged particles in the nuclei to relativistic velocities, have not been conclusively established. Thus, galactic nuclei are not simply massive, gravita-tionally bound compact complexes, consisting of stars, interstellar gas, and dust, but formations that have a number of specific properties. There are several hypotheses regarding the nature of the activity of galactic nuclei and quasars.

(1) A galactic nucleus is a compact (~1 parsec), massive cluster (~107 solar masses), in which star formation is sustained through the entry of gas into the nuclear region or through the merger of small stars into larger ones in the course of frequent collisions under conditions of high stellar density in the nuclei (~10 solar masses/parsec3). Massive stars evolve quickly, explode as supernovae, and become neutron stars or black holes (see NEUTRON STAR). When this occurs, gravitational energy, which is responsible for the activity of galactic nuclei, is released. Neutron stars, which manifest themselves as pulsars, may give rise to streams of relativistic particles, which are needed to achieve an observable radiation power (see PULSAR). “Bursts” of star formation—the production of a large number (tens of stars per year) of hot young stars, whose powerful ultraviolet radiation and corpuscular radiation recall nuclear activity—may also be responsible for the activity of galactic nuclei.

(2) A galactic nucleus is a compact, massive, rapidly rotating body (a rotator or spinor) with a strong (quasidipole) magnetic field, which, like the fields of pulsars, accelerates particles to relativistic velocities and is responsible for their high-power nonthermal radiation. In this case, the energy is drawn from the stored rotational energy of the spinor.

(3) A galactic nucleus is a black hole with a mass M > 103 solar masses, onto which surrounding gas and stars accrete. In 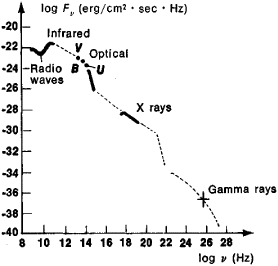 principle, the accretion mechanism may account for the release of 1054 (M/solar masses) ergs of gravitational energy, which is sufficient to explain the activity of galactic nuclei.

The central region of the Milky Way Galaxy is being investigated by the methods of radio, infrared, and X-ray astronomy, since optical investigations are impossible because of strong light absorption by interstellar dust. The nucleus coincides with the western component of the radio source Sagittarius A. Compact sources of nonthermal radio-frequency radiation (~0.01 parsec in diameter) have been detected in and near the center of the nucleus. It has been established from the radio-frequency radiation of ionized hydrogen that the center of the Milky Way Galaxy has a region of expanding gas measuring about 300 parsecs in diameter and a more extended region (about 600 parsecs) of infrared radiation (dust clouds). The central region also contains an ellipsoidal star cluster, with semiaxes of 800 and 300 parsecs and a mass of about 109 solar masses. The nucleus of the Milky Way Galaxy is surrounded by a rotating gaseous disk, measuring 1,600 parsecs in diameter and having an average thickness of about 400 parsecs. In its properties it is an active nucleus, which distinguishes it sharply from the nucleus of the closest spiral galaxy, the Andromeda Nebula, in which indications of activity in the nucleus have not been detected.

[gə′lak·tik ′nü·klē·əs]
(astronomy)
The center area in the galaxy about which there is a large spherical distribution of stars and from which the spiral arms emanate.
McGraw-Hill Dictionary of Scientific & Technical Terms, 6E, Copyright © 2003 by The McGraw-Hill Companies, Inc.