[′gas ‚tər·bən]
(mechanical engineering)
A heat engine that converts the energy of fuel into work by using compressed, hot gas as the working medium and that usually delivers its mechanical output power either as torque through a rotating shaft (industrial gas turbines) or as jet power in the form of velocity through an exhaust nozzle (aircraft jet engines). Also known as combustion turbine.
McGraw-Hill Dictionary of Scientific & Technical Terms, 6E, Copyright © 2003 by The McGraw-Hill Companies, Inc.
The following article is from The Great Soviet Encyclopedia (1979). It might be outdated or ideologically biased.

a continuous-action heat engine in whose blade section the energy of a compressed and heated gas is converted into mechanical work on a shaft. The compressed gas may be heated in a combustion chamber, a nuclear reactor, or other device.

The gas turbine first appeared in the late 1800’s as part of a gas-turbine engine and was structurally very similar to a steam turbine. It consists of a number of fixed blade rings that are arranged in tandem in the nozzle assembly with rotating blade rings of the rotor, which constitute its flow part. The nozzle apparatus, together with a rotor, makes up the turbine stage. The stage has a stator, which consists of the fixed parts (the housing, nozzle blades, and shroud rings), and a rotor, which is the set of rotating parts (rotor blades, disks, and shaft).

Gas turbines are classified according to the direction of the gas flow, the number of stages, the method of utilizing the heat drop, and the method of feeding the gas to the rotor. With respect to gas flow, a distinction is made among axial-flow (the most common), radial-flow, diagonal-flow, and tangential-flow types of gas turbine. In axial-flow types the flow in a meridional section moves mainly along the axis of the turbine, and in radial-flow types it moves perpendicular to the axis. Radial-flow turbines may be either inward-flow or centrifugal. In diagonal-flow turbines the gas flows at a certain angle to the axis of rotation. The rotor of a tangential-flow gas turbine has no blades; such turbines are used with very small gas flow rates—for example, in instruments.

There are single-stage and multistage gas turbines. The number of stages in a gas turbine is dictated by the turbine’s purpose and structural design, the power developed by one stage, and the operating pressure differential. According to the way in which the available heat drop is utilized, turbines are divided into velocity-compounded types, in which the flow is only turned by the rotor, without altering the pressure (impulse turbines); and pressure-compounded types, in which the pressure is reduced both in the nozzle blade assemblies and in the rotor blades (reaction turbines). Gas can be fed to the rotor through part of the nozzle assembly’s circumference (partial gas turbine) or over its entire circumference.

The process of energy conversion in a multistage turbine consists of a number of successive processes in the individual stages. Compressed and heated gas at an initial velocity passes through the blade-to-blade channels of the nozzle assembly where, in the course of expansion, part of the available heat drop is converted into kinetic energy of the exhaust flow. Further gas expansion and conversion of the heat drop into useful work take place in the blade-to-blade channels of the rotor. The gas flow acting on the rotor blades develops torque on the turbine’s shaft. As a result, the absolute velocity of the gas is reduced. The lower this velocity, the larger the part of the available gas energy that is converted into mechanical work on the shaft. The rotor blades receive the forces produced by a change in the direction of the gas velocity flowing around them (impulse flow effect) and by acceleration of the gas flow relative to the movement in the blade-to-blade channels (reaction flow effect).

The performance of a gas turbine is characterized by its efficiency, which is the ratio of the work obtained from the shaft to the available energy of the gas before it enters the turbine. In modern multistage turbines this reaches 0.92-0.94.

Large contributions to gas turbine development were made by the Soviet scientists B. S. Stechkin, N. R. Briling, V. V. Uvarov, and G. S. Zhiritskii. Important advances in gasturbine development for stationary and mobile gas-turbine installations have been achieved by foreign companies (the Swiss companies Brown, Boveri, where the well-known Slovak scientist A. Stodola worked, and Sulzer; the American company General Electric; and others).

Further development of the gas turbine is dependent on the possibility of raising the temperature of the gas before it enters the turbine, which is associated with the creation of heat-resistant materials and reliable blade cooling systems, the improvement of the flow section, and other factors.

Gas turbine engines depend on the principle of the air cycle, where, ambient air is first compressed to a maximum pressure level, at which point fuel heat energy is added to raise its temperature, also to a maximum level. The air is then expanded from high to low pressure through a turbine. The expansion process through the turbine extracts energy from the air, while the compression process requires energy input.

As the air moves through the engine, the turbine continuously provides energy sufficient to drive the compressor. In addition, because the turbine expansion process starts from a high temperature that comes from the fuel energy released by combustion, surplus energy beyond that required for compression can be extracted from the air by further expansion. At the point where the turbine has provided sufficient energy to power the compressor, the air pressure remains higher than the outside ambient level. This higher pressure represents available energy in the air that can be turned into useful output power by a final expansion process that returns the air pressure to ambient. The exhaust air leaves the engine with pressure equal to the outside, but at a higher temperature. As with any heat engine, the high exhaust temperature represents wasted energy that will dissipate into the outside atmosphere. See Compressor

From an energy accounting standpoint, the sequence of processes acting on the air from front to rear constitutes a full cycle. It starts with the outside air entering at its initial state, and is completed when the air returns again to both ambient pressure and temperature levels. The series of cycle processes includes the final outside dissipation of the wasted exhaust energy, inevitable for every heat engine according to Carnot's principle. The ideal version of the gas turbine cycle is known as the Brayton cycle. See Brayton cycle, Carnot cycle

For any completed cycle, the total energy added from the fuel sources will always be equal to the sum of the useful output energy and the wasted exhaust energy. The thermal efficiency, which is the ratio of net output energy to fuel input energy for the cycle, measures the engine's ability to minimize wasted energy. A thermal efficiency of 60% means that for every 100 units of added energy 60 units will be available as useful output while 40 units will leave the engine as high-temperature exhaust.

Another performance measure is the specific power, which is the ratio of output power to quantity of working substance mass flow rate. Gas turbine engines, in comparison with other types of heat engines, are characterized not only by high levels of efficiency but also by very high levels of specific power. They are especially useful for applications that need compact power.

By far the most common mechanical arrangement for the gas turbine is an in-line axial flow positioning of all components (see illustration). In the ground-based engine, the inlet at the front guides the incoming air into the compressor, which in turn delivers high-pressure air into the combustor section. The combustor burns the injected fuel at a high reaction temperature, using some of the air itself as an oxygen source. The combustion products in the combustor mix with the remaining unused air to reach a uniform equilibrium temperature, still high but diluted down from the reaction temperature. The hot, high-pressure combustor exit air enters the compressor drive turbine, where it expands down in pressure toward, but stays higher than, ambient level. This expansion process results in output shaft power that can be delivered directly to the compressor through a connecting rotating shaft. Starting from the exit of the compressor drive turbine, net output power remains available. This power can be realized through the process of further pressure expansion completely down to the ambient level. For ground-based applications, the final expansion takes place through a power turbine whose output shaft is connected to the external load. In the single-spool arrangement the power turbine and compressor drive turbine are indistinguishably combined into one unit which, together with the compressor and the output load, is connected to a common shaft. For aircraft applications, either a power turbine extracts useful power to drive a propeller through a separate shaft (turboprop), or the expansion process takes place through a nozzle which acts to convert some of the thermal energy into velocity energy to be used for jet propulsion. See Aircraft engine, Jet propulsion 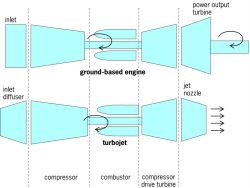 Gas turbines characteristically produce smooth and linear throttle response over their entire operating range. Rotor speeds normally vary continuously over this range without the need for the gear shifting and clutch mechanisms found in piston engines. The governing fuel control senses rotor speeds, pressures, and temperatures to maintain stable, steady power or thrust output and, when needed, ensure rapid accelerations and decelerations. The control is programmed, normally by electronic input, to guard against harming the engine during throttle changes by governing the appropriate fuel input rate. Most important, during throttle transients the control functions to prevent turbine overheating, burner blowout, and compressor surge.