(gī`zər) [Icel.], hot spring from which water and steam are ejected periodically to heights ranging from a few to several hundred feet. Notable geysers are found in Iceland, New Zealand, and W United States, which are areas of recent volcanic activity. Geyser action in Iceland was studied by the German chemist R. W. BunsenBunsen, Robert Wilhelm
, 1811–99, German scientist, educated at the Univ. of Göttingen, where he received his doctorate in 1830. He served on the faculties of several universities and was at Heidelberg from 1852 to 1889.
..... Click the link for more information. , whose explanation of it (1847) is generally accepted. Water, mainly from rainfall, is heated by absorbing hot gases or by contact with hot rocks. If it flows into a crooked tube or fissure in the ground, the heat fails to circulate by convection and is concentrated in one section of the tube, located well below the surface. Here the water may be superheated without boiling because of the pressure of the colder water above. When at last it does turn to steam it raises the upper part of the column of water, causing it to overflow. This reduces the pressure on the water below, a great deal is abruptly converted into steam, and the whole column—steam and water—is forced to erupt. Geyser activity is influenced by earth tides, which are caused by the moon's gravitational pull on the earth. Geysers often build cones of opaline silica called geyserite around their vents. "Old Faithful" in Yellowstone Park usually erupts at intervals of about 66 min, but it has become less regular in recent years. Mud geysers or mud volcanoes are eruptive mud springs. Geothermal generating plants, notably in California and New Zealand, use geysers to produce electricity. Geyserlike eruptions were observed by the space probe Cassini on Enceladus, one of the moons of Saturn.

[′gī·zər]
(hydrology)
A natural spring or fountain which discharges a column of water or steam into the air at more or less regular intervals.
McGraw-Hill Dictionary of Scientific & Technical Terms, 6E, Copyright © 2003 by The McGraw-Hill Companies, Inc. 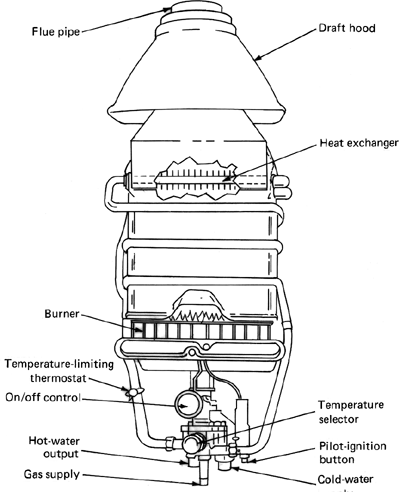 instantaneous-type water heater
A heater in which there is an exceedingly rapid increase in water temperature as the water flows through tubes surrounding an electric heating coil; best suited for applications requiring a continuous flow of hot water. Must be used with care when the demand is low because accurate temperature control at low flow rates usually is poor.
McGraw-Hill Dictionary of Architecture and Construction. Copyright © 2003 by McGraw-Hill Companies, Inc.