star cluster, a group of stars near each other in space and resembling each other in certain characteristics that suggest a common origin for the group. Stars in the same cluster move at the same rate and in the same direction. Two types of clusters can be distinguished—open clusters, also called galactic clusters because of their wide distribution in our galaxy (the Milky Way), and globular clusters. More than one thousand open clusters have been cataloged in the Milky Way, most of which are found in the spiral arms of the galaxy. Typically, an open cluster contains from a few dozen to a thousand loosely scattered stars and exists in a region rich in gas and dust. Among those which can be detected with the unaided eye are the Hyades cluster in the constellation Taurus, the Coma Berenices cluster, the Pleiades cluster, and the Praesepe cluster. Globular clusters are spherical aggregates of from thousands to hundreds of thousands of densely concentrated stars. Rather than lying on the galactic plane, these clusters are members of the outer halo, moving around the nucleus of our galaxy in highly inclined orbits. Because of their distribution around the galaxy, they provide an outline of its shape. About 150 globular clusters are known in the Milky Way galaxy, and others have been found in nearby galaxies. Visible to the unaided eye are Omega Centauri and 47 Tucanae, both in the southern skies, and M13 in the northern sky. Star clusters are cosmologically important as a first step to understanding the distance scale of the universe (see Hyades); and theoretical astronomers use observations of globular clusters to investigate the evolution and life span of stars. Because all the stars in a particular cluster are coeval (the same age), astronomers can infer that massive stars change more rapidly over time than less massive ones. X-ray sources have been detected recently in some globular clusters. Millisecond pulsars have also been found.
The Columbia Electronic Encyclopedia™ Copyright © 2022, Columbia University Press. Licensed from Columbia University Press. All rights reserved. 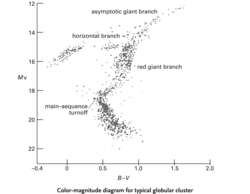 A spherically symmetrical compact cluster of stars, containing from several tens of thousands to maybe a million stars that are thought to share a common origin. An example is the Great Cluster in Hercules. A few globular clusters, such as Omega Centauri, appear to be slightly flattened. The concentration of stars increases greatly toward the center of the cluster, where the density may be as much as 1000 stars per cubic parsec. Globular clusters occur in our Galaxy and in other galaxies. About 150 are known in the Galaxy. Most appear to move in giant and highly eccentric elliptical orbits about the galactic center, and, unlike open clusters, are not concentrated toward the galactic plane; instead they show a roughly spherical distribution in the galactic halo. About 20% are found in the galactic disk, moving in more circular orbits.

Globular clusters are population II systems (˜80% halo population II): all the stars within them are relatively old (older than the Sun) and have a very low metal content; the metallicity varies from cluster to cluster, but in most clusters all stars have very similar chemical compositions. The galactic disk clusters are younger and more metal-rich than the halo objects. The stars that dominate the visual output of globular clusters are red giants, the bluer horizontal-branch giants becoming dominant at shorter wavelengths. Although very few ordinary binary stars are observed in globular clusters, many contain strong X-ray sources typical of X-ray binaries or cataclysmic variables, i.e. systems containing a neutron star or a white dwarf, respectively.

The distribution and other characteristics of globular clusters suggest that they were formed early in the life of the Galaxy. The oldest formed possibly some 12 to 16 billion years ago, before the main body of the galactic disk had evolved. Because most of the member stars will have evolved away from the main sequence, the Hertzsprung–Russell diagram for stars of a globular cluster differs greatly from the conventional H–R diagram (see illustration). The luminosity at the turnoff point from the main sequence gives a measure of the age of a cluster, given the distance. Distances to globular clusters are usually calculated from the apparent magnitudes of the RR Lyrae stars within them. Although the age of the oldest globular clusters is disputed, the difference between the ages of clusters can be measured more precisely. Evidence is mounting of a spread in ages of several billion years.

a tightly packed group of stars that can be seen in a small section of the sky, consisting of stars that are close to one another in space and characterized by the spherical shape of the distribution of the stars. Two of the globular clusters closest to us, with a myriad of stars, are located in the constellations Hercules and Centaurus. (SeeSTAR CLUSTER.)

Feedback
Flashcards & Bookmarks ?
Please log in or register to use Flashcards and Bookmarks. You can also log in with
Flashcards ?
My bookmarks ?
+ Add current page to bookmarks
Mentioned in ?
References in periodicals archive ?
John Herschel, son of William, observing with the 18-inch f/3 speculum at the Cape of Good Hope, records the object as "a globular cluster, bright, 4' long by 3' broad; all resolved into stars, gradually more compressed in the middle.
Celestial Home of Stars
Unlike globular clusters, open clusters usually show plenty of open space between their stars.
Summer: the richest part of the Milky Way is on display now
Although large telescopes are really needed to visually saviour the beauty that fully resolved globular clusters can give, if you are travelling south on holiday this summer even a pair of 10x50 binoculars will allow you to enjoy some of the splendour of Omega Centauri.
Two great globular clusters--north versus south
It made exacting all-sky measurements that include many globular clusters. Hubble has a smaller field of view, but it can measure fainter stars and therefore reach more distant clusters.
What Does The Milky Way Weigh?
But is G1 a true globular cluster? With more than twice the mass of Omega Centauri (the Milky Way's heftiest globular), G1 may be the remnant core of a stripped dwarf galaxy that was digested by M31 earlier in its history.
In Search of: Extragalactic Globulars
Globular clusters are relics of the early universe and usually contain thousands of stars crammed into a ball a few dozen light-years across.
Entire star cluster thrown out of its galaxy
NGC 6254 is a lovely star-rich globular cluster which displays a flimsy edge.
Ophiuchus, the Herb Healer
Messier likely also miscategorized the globular cluster Messier 28 because there was no Hubble Space Telescope to provide a clear view of the celestial object at the time.
NASA's Hubble Captures Stunning Messier 28 In Sagittarius Constellation
15 ( ANI ): The Hubble Space Telescope has clicked the best ever image of the globular cluster Messier 15, a gathering of very old stars that orbits the Milky Way's center.
Hubble clicks pics of 'mysterious' globular cluster Messier 15
Using a spectrometer at the Very Large Telescope in Paranal, Chile, Luca Pasquini of the European Southern Observatory in Garching, Germany, and his colleagues have for the first time detected beryllium in two of the Milky Way's oldest stars, residing in the globular cluster NGC 6397.
Beryllium data confirm stars' age