any species of the large genus Solidago of the family Asteraceae (asteraster
[Gr.,=star], common name for the Asteraceae (Compositae), the aster family, in North America, name for plants of the genus Aster, sometimes called wild asters, and for a related plant more correctly called China aster (Callistephus chinensis
..... Click the link for more information.  family), chiefly North American weedy herbs. They have small yellow flowers clustered, often in panicles, along a wandlike stem. The few species that have white flowers are called silverrod. The goldenrods were, at one time, incorrectly considered a chief cause of hay fever, probably because they bloom in late summer and autumn, at the same time as the less conspicuous ragweeds. Goldenrods attracted short-lived commercial attention when Thomas Edison found that certain species contain latex. Some species (sometimes called dyer's-weed) have yielded a dye, and the leaves of many species have long been used for medicinal preparations and teas, whence the botanical name [Lat. solidare=to make whole]. The goldenrod adds beauty to fields, roadsides, and salt marshes in so many parts of the United States that it has been chosen as the state flower of Alabama, Kentucky, and Nebraska and has even been suggested for the national flower. Goldenrod is classified in the division MagnoliophytaMagnoliophyta
, division of the plant kingdom consisting of those organisms commonly called the flowering plants, or angiosperms. The angiosperms have leaves, stems, and roots, and vascular, or conducting, tissue (xylem and phloem).
..... Click the link for more information. , class Magnoliopsida, order Asterales, family Asteraceae.
The Columbia Electronic Encyclopedia™ Copyright © 2013, Columbia University Press. Licensed from Columbia University Press. All rights reserved. www.cc.columbia.edu/cu/cup/ 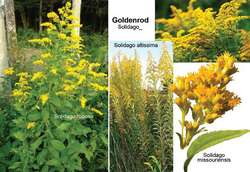 Grows next to ragweed and is the antidote plant to ragweed. People think they are allergic to goldenrod, but it's actually the ragweed right next to it causing the allergies. Canada exports tons of goldenrod to Europe and the U.K. for allergies because it doesn't normally grow in Europe. It is a great herb for allergies, hay fever, colic and gas. The seeds are a food source. Flowers can be chewed for sore throats. Antiinflammatory. Used for urinary system, kidneys, stones. Used in douche for yeast infections. To use, harvest the flower right when it's young and starting and make tea with it. The young tiny yellow flower cluster has a pleasant anise-like flavor, but the older bigger flower cluster has a bitter taste. You can still use the older flowers for the antiallergy benefit, but it just doesn't taste very good. Flowers, leaves and seeds are used. There are 100 species. Can grow up to 7 ft tall! (2.3m)
Edible Plant Guide © 2012 Markus Rothkranz
The following article is from The Great Soviet Encyclopedia (1979). It might be outdated or ideologically biased.

(Solidago), a genus of perennial grasses of the family Compositae. They have small racemes with yellow flowers that are usually clustered in a common paniculate inflorescence. The fruit is an achene with a pappus. There are about 100 species, primarily in America but also in Eurasia. In the USSR there are about 16 wild-growing species and five to six introduced species that now grow wild. The best-known species is Solidago virgaurea, or goldenrod, which grows in the European USSR, the Caucasus, and Western Siberia. It grows in shrubs, felled forests, on the edges of forests, and in meadows. It is poisonous. Some American species contain caoutchouc. Canadian and hybrid goldenrod are cultivated as ornamentals.

1. any plant of the genus Solidago, of North America, Europe, and Asia, having spikes made up of inflorescences of minute yellow florets: family Asteraceae (composites)
2. any of various similar related plants, such as Brachychaeta sphacelata (false goldenrod) of the southern US
Collins Discovery Encyclopedia, 1st edition © HarperCollins Publishers 2005

Feedback
Flashcards & Bookmarks ?
Please log in or register to use Flashcards and Bookmarks. You can also log in with
Flashcards ?
My bookmarks ?
+ Add current page to bookmarks
Mentioned in ?
References in periodicals archive ?
and May, galls from the previous year (2012) were harvested from goldenrod stems.
Evidence for plant-mediated competition between defoliating and gall-forming specialists attacking solidago altissima
One such plant that blooms at about the exact time as goldenrod is ragweed.
Something in the air
Inland's president and CEO Mark Zalatoris noted that the acquisition of Goldenrod Marketplace complements the trust's recently unveiled joint venture with MAB which seeks to develop grocery-anchored shopping centres in the southeastern US.
Inland Real Estate acquires two shopping centres for USD63.3m
caligatum (Richards) on goldenrod (Solidago spp.), and U.
Risk to native Uroleucon Aphids (Hemiptera: Aphididae) from non-native lady beetles (Coleoptera: Coccinellidae)
Goldenrod Corporation has introduced a new line of shafts for coreless winding applications.
Shafts for coreless winding
Cores and chucks themselves also received some makeovers last year, and global companies Nimcor and Goldenrod both released new innovations in 2009.
New cores, chucks and reels innovations help converters go green, cut costs
Goldenrod, a weed, grows naturally in abundance, as do perennial grasses.
Marginal land tapped for biofuels: New York land bank co-op could be first of its kind
This is true especially for insects that live on the tall goldenrod (Solidago altissima).
Science galls me: what is a niche anyway?
The check was damp and attached to the check was a discolored goldenrod copy of the invoice--both emanating the distinct aroma of urine!
Just when you think you've seen ... or smelled ... it all
Sitting in an iris in France, the goldenrod spider can change its colour to match the local flowers.
Secret squirrel; THE ANIMAL WORLD'S AMAZING MASTERS OF DISGUISE
More than 35 species of asters grace New York's marshes, fields, swamps, forests and mountains; more even than the multitude of goldenrod species that share autumn's stellar limelight from August through October.
The Aster
Though there are many other herbs that can be used for allergies in general (including mullein, goldenrod and licorice; see tonic tea recipe) and each individual will have a unique symptom picture, these suggestions are a great place to start.
Allergies, Schmallergies: with herbs and a little planning ahead, you may just avoid the sniffles this season, shares herbalist Sandi Ford