1. a deep ravine, esp one through which a river runs
2. the contents of the stomach
3. Archaic the throat or gullet
Collins Discovery Encyclopedia, 1st edition © HarperCollins Publishers 2005

[gȯrj]
(architecture)
The entrance to a bastion.
(geography)
A narrow passage between mountains or the walls of a canyon, especially one with steep, rocky walls.
(oceanography)
A collection of solid matter obstructing a channel or a river, as an ice gorge.
McGraw-Hill Dictionary of Scientific & Technical Terms, 6E, Copyright © 2003 by The McGraw-Hill Companies, Inc. 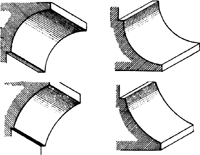 1. In some orders of columnar architecture, a narrow band around the shaft near the top, or forming part of the capital near the bottom; a fillet or narrow member which seems to divide the capital from the shaft.
2. A cavetto or hollow molding.
3. A narrow entry into a bastion.

A concave, often circular molding; a cavetto or scotia.
McGraw-Hill Dictionary of Architecture and Construction. Copyright © 2003 by McGraw-Hill Companies, Inc.

Feedback
Flashcards & Bookmarks ?
Please log in or register to use Flashcards and Bookmarks. You can also log in with
Flashcards ?
My bookmarks ?
+ Add current page to bookmarks
Mentioned in ?
References in periodicals archive ?
While Clark Rigging's AC 350/6 crane was lowering supplies to clear the gorge of trash and overgrowth and prepare the riverside for a new dry dock and observation area, work commenced on constructing a buck hoist elevator for a more efficient way to get workers down to the project site.
How Crane Rigging helped rescue American business
McCain saddles last-time-out winner Reindeer Dippin, who receives 4lb from joint top-weight Gorge in the 2m contest, which forms part of today's Scoop6.
Cosgriff has first British runner
Doug Oliver, CCW Reserve Manager for Meirionnydd Oakwoods, said: "Exploring Wales' wooded gorges can be an unforgettable experience, bringing you into close contact with some of the rarest natural habitats in the world.
Top tips for gorge walkers online
The exhibit starts with Watkins, who made four trips to the gorge in the mid to late 19th century, carrying a large-format camera and a set of collodion wet-plate glass negatives that were in use at the time.
Photographs at Portland Art Museum put history of gorge in focus
"What we had were a number of students who were not paying attention to safety at the gorges and a number of them drowned," said Bova.
Now showing: fixed on filmmaking to get safety messages through to impressionable students
A visit to Lost River Gorge provides a welcomed alternative to New Hampshire's beaches or lakes during the warm summer months.
Lost River Gorge: A great find
Three days later, as the weather is finally clearing, I walk out of the Science News offices about half an hour's drive from the Gorge. Before I reach the end of the block, I spot four kinds of fungi.
30 hours with team slime mold: field notes from the lumpy, yellow side of biodiversity
After this introduction, visitors are encouraged to stroll on the terraced roof, where views of the Kawerau Gorge are framed under the translucent canopy floating overhead.
Grape expectations: an elegant celebration of wine-making in the far south contrasts with its sublime site
Today it is the turn of Staward Gorge, which, with Allen Banks, makes up a stretch of blissfully beautiful river and woodland in Northumberland, and which is cared for by the National Trust.
Gorging ourselves on its sheer beauty
Troutdale, Ore., is known as the gateway to the Columbia River Gorge. The old historic Columbia River Highway begins as Troutdale's main street.
Troutdale hooks visitors to river gorge: Oregon community is the gateway to Columbia River Gorge and a host of natural attractions
(His comments come after Georgia said one man was killed and seven people wounded in the Russian aerial attack carried out in the Pankisi Gorge on Aug.
RUSSIA - Aug. 24 - US Rebukes Moscow Over Georgia Bombing