graphite (grăfˈīt), an allotropic form of carbon, known also as plumbago and black lead. It is dark gray or black, crystalline (often in the form of slippery scales), greasy, and soft, with a metallic luster. It is a good conductor of electricity and does not fuse at very high temperatures or burn easily. It occurs in nature in grayish-black masses, massive or crystalline, and is obtained in various parts of the world—in the United States (massive) in Nevada, Michigan, and Rhode Island and (crystalline) in Alabama and North Carolina; in Brazil; in the British Isles and on the Continent; and in Sri Lanka, Madagascar, and Siberia. It is also prepared artificially by treating hard coal in the electric furnace, a process discovered by E. G. Acheson. The uses of graphite are wide and diverse. The so-called lead of pencils is in reality a mixture of graphite with clay. Crucibles required to withstand high temperatures and also electrodes are commonly made of graphite. It is used also in stove polish, in some paints, and as a lubricant.
The Columbia Electronic Encyclopedia™ Copyright © 2022, Columbia University Press. Licensed from Columbia University Press. All rights reserved.
The following article is from The Great Soviet Encyclopedia (1979). It might be outdated or ideologically biased.

a mineral; the hexagonal crystalline modification of pure carbon that is the most stable under the conditions of the earth’s crust. Well-formed crystals are rare, and their shape is usually laminar. Natural graphite is most often found in the form of flakes without crystallographic contours and in the form of aggregates of flakes.

The crystal lattice of graphite is of the layered type (see Figure 1). In the layers, the carbon atoms are located at the points of the hexagonal cells of the layer. Each carbon atom is surrounded by three adjacent atoms at a distance of 1.42 angstroms (Å). The layers are parallel to one another at a distance of 3.55 Λ with a symmetrical repetition in every other layer, since they are reciprocally displaced. The bond between the carbon atoms in the same layer is strong and covalent; between the layers it is weak and of the residual metallic type.

The particular features of the graphite structure and the presence of different types of bonds cause the anisotropy of a number of the physical properties. The residual metallic bond produces the opacity, metallic luster, and high electrical conductivity. The unidirectional cleavage characteristic of graphite also depends on the poor bonding between the atomic layers. Its density is 2,230 kg/m3. Because of the ease of rupture between the lattices perpendicular to the plane (0001), the hardness of graphite on the mineralogical scale is 1. In the layer itself, the hardness is high (5.5 and higher). The high melting point of graphite (3850° ± 50°C) is explained by the great strength of the bond between the atoms in the lattice itself. Graphite is a good conductor of electricity (the electrical resistance of the crystals is 0.42 x 10-4 ohms per m). Graphite powders and blocks have significantly greater resistance, which increases with increasing dispersion (up to 8–20 × 10-4 ohms per cm). Graphite is magnetically anisotropic and acid-resistant; it oxidizes only at high temperatures but is soluble in molten iron and ignites in molten saltpeter. It has a low thermal neutron capture cross section and is easily worked. The properties of graphite are significantly altered by neutron irradiation (its electrical resistance and elastic and hardness moduli increase; its heat conductivity decreases by a factor of approximately 20). 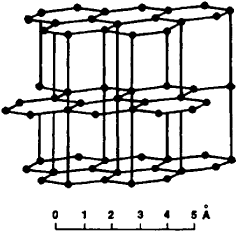 A distinction is made between deposits of crystalline graphite, which is related to magmatic rock or crystalline schists, and deposits of cryptocrystalline graphite, which forms in association with metamorphism of coal. In magmatic rock, graphite crystallizes from a melt and is seen in the form of individual scales and accumulations (pockets and stockworks) of varying size and content (for example, the Botogol’ deposit in the Buriat ASSR, where sections of pure graphite are worked without dressing). Graphite is extracted chiefly from crystalline schists that formed as a result of the deep metamorphism of clays containing bituminous substances. The graphite content in the crystalline schists ranges from 3 to 10–20 percent and higher. The graphite flakes are extracted from the ore by flotation. In the USSR, graphite is mined in the Ukraine; abroad it is mined in Czechoslovakia, Austria, West Germany, Finland, the Malagasy Republic, and Ceylon.

Cryptocrystalline graphite forms upon a change in the coal seams under the effect of magmatic rock. In the deposits of this type, the carbon content is 60–85 percent; the ores are used without dressing. Major deposits of such graphite are known in the USSR in the Urals and Krasnoiarsk Krai and abroad in Mexico and South Korea.

Because of a number of valuable physicochemical properties, graphites are used in many areas of modern industry. Graphite’s high heat resistance has brought about its use in producing refractory materials and articles such as casting molds, crucibles, ceramics, and antipickup paints (in foundry work). Artificial clump graphite is used as an erosion-resistant coating for rocket engine nozzles, combustion chambers, and nose cones and for making certain rocket parts. As a consequence of its high electrical conductivity, graphite is widely used for manufacturing electrical-engineering articles and materials such as primary cells, alkaline storage batteries, electrodes, sliding contacts, heaters, and conducting coverings. The chemical resistance of graphite leads to its use in chemical machine building as a structural material (the production of lining tile, pipes, and heat exchangers). Its low coefficient of friction makes possible its use for manufacturing lubricants and antifriction articles. Blocks of very pure artificial graphite are used in nuclear engineering as reactor moderators. Finely ground cryptocrystalline graphite in the form of a suspension is used for preventing the formation of scale on the walls of steam boilers. Graphite is also used for producing pencils and paints. All the areas of use mentioned make very diverse demands on the quality of the graphite (in terms of purity, crystal size, and particle shape); therefore, the various types of graphite are not always interchangeable.

Among the socialist countries, the USSR and Czechoslovakia lead in terms of the amount of graphite production. In the capitalist world, the largest amounts of graphite are produced by South Korea, Mexico. Austria, and West Germany. The best grades of large-crystal graphite are mined in small quantities in Ceylon and the Malagasy Republic.

[′gra‚fīt]
(mineralogy)
A mineral consisting of a low-pressure allotropic form of carbon; it is soft, black, and lustrous and has a greasy feeling; it occurs naturally in hexagonal crystals or massive or can be synthesized from petroleum coke; hardness is 1-2 on Mohs scale, and specific gravity is 2.09-2.23; used in pencils, crucibles, lubricants, paints, and polishes. Also known as black lead; plumbago.
McGraw-Hill Dictionary of Scientific & Technical Terms, 6E, Copyright © 2003 by The McGraw-Hill Companies, Inc.

One of the forms under which carbon occurs in nature; electrically conductive; in powdered form, used as a lubricant.
McGraw-Hill Dictionary of Architecture and Construction. Copyright © 2003 by McGraw-Hill Companies, Inc.

a blackish soft allotropic form of carbon in hexagonal crystalline form: used in pencils, crucibles, and electrodes, as a lubricant, as a moderator in nuclear reactors, and, in a carbon fibre form, as a tough lightweight material for sporting equipment
Collins Discovery Encyclopedia, 1st edition © HarperCollins Publishers 2005

Feedback
Flashcards & Bookmarks ?
Please log in or register to use Flashcards and Bookmarks. You can also log in with
Flashcards ?
My bookmarks ?
+ Add current page to bookmarks
Mentioned in ?
References in periodicals archive ?
Petrol residue is also used to prepare artificial graphite. This is a residue that is left after petroleum residue has been coked.
Global Artificial Graphite Market Analysis 2019 - Dynamics, Trends, Revenue, Regional Segmented, Outlook & Forecast Till 2025
A further mapping and sampling program has recently been completed with a number of new graphite mineralised zones identified and mapped on surface.
Metals Australia Ltd - Further High-Grade Near Surface Drilling Intersections at Lac Rainy Graphite Project
Elcora has been working on refining both graphite and graphene through its Canadian grants, (see Press Release May 28, 2019-Elcora awarded grant from Dalhousie University to develop super capacitors, as well as research and development agreements with Solargise Canada Inc.
Elcora Advanced Materials Provides Update Regarding Tanzania Graphite Project
Hexagon's managing director Mike Rosenstreich said: "We are very pleased to have added a low cost North American exploration project to the portfolio, particularly one in arguably the best graphite jurisdiction on mainland USA at a time when there is strong emphasis on "Sourced in America" critical minerals.
Hexagon Resources identifies outcropping graphite target at US project
Caption: The Socialite, 2010 Graphite on vintage ledger paper 9" by 12" COLLECTION OF DEAN BACOUET & DYLAN LANDIS BACOUET
Renee Stout: Renee Stout grew up in Pittsburgh, Pennsylvania, and received her B.F.A. from Carnegie-Mellon University in 1980, where she chose to focus on painting
Alabama Graphite is also an aspiring battery materials production company.
Alabama Graphite Closes Acquisition of Westwater Resources
Graphite delivers a high-end feature set in a comprehensive and robust package, unlocking the potential of mid-size productions for virtually any application.
Ross Video delivers integrated production solution for mid-size productions
The Components of Graphite Matrix before and after Deconsolidation
The Electric Current Effect on Electrochemical Deconsolidation of Spherical Fuel Elements
In this study, the SiC conversion coatings were formed on the graphite substrates by conversion reaction method through the carbothermal reduction process of the silica powder and graphite.
SiC Conversion Coating Prepared from Silica-Graphite Reaction
In this market study, the global graphite market is segmented on the premise of geography into North America, Europe, Asia Pacific, and Rest of the World (RoW).
Global Graphite Market to Reach US$17.56 Billion by 2020 - By MRRSE
The results of Next Graphite's screening process, ratios of its lump yield, and planned increases in daily screening yields will be calculated into its economic plans for its future processing plant.
Next Graphite completes screening programme