[′grau̇nd i‚fekt]
(aerospace engineering)
Increase in the lift of an aircraft operating close to the ground caused by reaction between high-velocity downwash from its wing or rotor and the ground.
(communications)
The effect of ground conditions on radio communications.
McGraw-Hill Dictionary of Scientific & Technical Terms, 6E, Copyright © 2003 by The McGraw-Hill Companies, Inc. 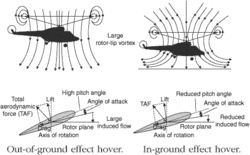 The ground effect on a half-wave, horizontal dipole antenna, viewed from the axis of the wire. At A, the radiation pattern in the absence of ground; at B the radiation pattern for an antenna height of ¼ wavelength over perfectly conducting ground; at C, a typical radiation pattern for antenna height of ¼ wavelength over normal ground.
i. The change in the aerodynamic reaction on an aircraft caused by the proximity of the ground. An aircraft, helicopter, or any other flying machine flying very near to the ground experiences an increase in lift. This additional lift or cushioning is caused by an effective increase in the angle of attack by the deflection of the downwash and without an increment in the induced drag. The ground effect diminishes rapidly when the aircraft is higher than about half a wingspan or three-quarters of a diameter of rotor disc above the ground. Other factors that influence the ground effect are the nature of the ground, its slope, and the prevalent wind. In the case of rotorcraft operating near the ground, induced drag is reduced, and the lift vector becomes more vertical as a result of the reduced inflow velocity. The vortex ring becomes smaller, and hovering can be sustained with less power.
ii. All unwanted effects caused by ground interference on radars, radio NAVAIDS (navigational aids), and other electromagnetic systems. See ground clutter.
iii. The modification of the directional pattern of an antenna system, especially at the very low, low, medium, and high frequencies, by the presence of the surface of the earth underneath the antenna. The effect is more pronounced in the vertical, or elevation, plane than in the horizontal plane. Ground effects have a large influence on the optimum distance at which the communication is realized.
An Illustrated Dictionary of Aviation Copyright © 2005 by The McGraw-Hill Companies, Inc. All rights reserved

Feedback
Flashcards & Bookmarks ?
Please log in or register to use Flashcards and Bookmarks. You can also log in with
Flashcards ?
My bookmarks ?
+ Add current page to bookmarks
Mentioned in ?
References in periodicals archive ?
An investigation on the aerodynamics of a symmetrical airfoil in ground effect, Experimental Thermal and Fluid Science 29: 633-647.
Characteristics of Ground Effects of an Unmanned Aerial Vehicle with Medium-aspect-ratio Flying Wings during Take-Off
However, in almost all cases, the model of the ground effect in [11] is assumed or evaluated for a single rotor.
Characterization of the Aerodynamic Ground Effect and Its Influence in Multirotor Control
O'Meara, "Wing in ground effect craft review," Contract Report CR-9802, The Sir Lawrence Wackett Centre for Aerospace Design Technology, Royal Melbourne Institute of Technology, Melbourne, Australia, 1999.
Experimental investigation of a wing-in-ground effect craft
To prevent this type of accident, the pilot should have allowed EKIN to increase, perhaps to VY, while remaining in ground effect before attempting to climb.
Mismanaging flight energy: it's a fundamental reason we lose control when taking off and landing
After 40-some years of flying (private, CFI, charter, etc.) I took up helicopter flying in 2006.1 went into it thinking I was quite familiar with the ground effect, and indeed, it plays heavily on the performance of light (piston) helicopters in a hover.
Water effect?
Yes, H-46s aren't known for their powerful engines, but our power check indicated we had the power available to hover out of ground effect with the load attached, However, on my approach.
Pickled
The lack of respect many pilots give to ground effect sort of makes it the Rodney Dangerfield of aerodynamics.
Using ground effect: it can come in handy on soft fields and when power is limited, but be gentle with the pitch control
Smith calculated power was available for a single-engine hover in ground effect. LCdr.
Bravo Zulu
Not surprisingly, he discovered that once he pulled the airplane out of ground effect, the airspeed started deteriorating and the airplane either sank back to the ground or ran into an obstruction.
Timed-out takeoffs: your decision to abort, return or continue if there's a problem may get complicated by a clearance void time. It shouldn't
The aircraft accelerated as the propeller feathered and floated in ground effect for 2,000 feet.
A lesson in teamwork