[′grau̇nd kən‚trōld ə‚prōch]
(navigation)
Technique or procedures by which a ground controller directs an aircraft to reach a point from which a landing may be made; the controller utilizes information from various sensors, including radar.
McGraw-Hill Dictionary of Scientific & Technical Terms, 6E, Copyright © 2003 by The McGraw-Hill Companies, Inc. 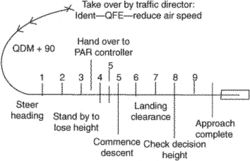 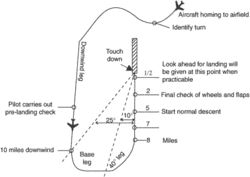 A typical ground controlled approach.
The technique or procedure for “talking down” an aircraft during its approach to position it for landing. A radar approach system operated from the ground by air traffic personnel transmits instructions to the pilot by radio. The initial approach is conducted with surveillance radar (SRE [surveillance radar element] or ASR [airport surveillance radar]) and the latter, and the more crucial, part of the approach by precision approach radar (PAR). It is possible to conduct approaches solely with either ASR or with both ASR and PAR. However, the minimums with the former are not as stringent as the latter. Pilots should specifically request a PAR approach when they desire a precision radar approach or an ASR, or surveillance approach, when they desire a non-precision radar approach.
An Illustrated Dictionary of Aviation Copyright © 2005 by The McGraw-Hill Companies, Inc. All rights reserved

Feedback
Flashcards & Bookmarks ?
Please log in or register to use Flashcards and Bookmarks. You can also log in with
Flashcards ?
My bookmarks ?
+ Add current page to bookmarks
Mentioned in ?
References in periodicals archive ?
SOP is not to allow ground-controlled approaches (GCAs) to the same runway where field-carrier-landing practices (FCLPs) are being flown.
Midair and near-midair scenarios