see gyroscopegyroscope
, symmetrical mass, usually a wheel, mounted so that it can spin about an axis in any direction. When spinning, the gyroscope has special properties. Many spinning objects exhibit some of these properties; the rotation of the earth about its axis gives it the
..... Click the link for more information. .
The Columbia Electronic Encyclopedia™ Copyright © 2013, Columbia University Press. Licensed from Columbia University Press. All rights reserved. www.cc.columbia.edu/cu/cup/
The following article is from The Great Soviet Encyclopedia (1979). It might be outdated or ideologically biased.

a mechanical indicator of the direction of the true (geographic) meridian, designed for determining the course of an object, as well as the azimuth (bearing) of the direction of orientation. The advantages of the gyrocompass as compared to a magnetic compass are that it indicates the direction of the geographic (rather than magnetic) meridian, its readings are affected considerably less by moving metallic masses (iron and steel) and by magnetic fields than those of a magnetic compass, and its accuracy is higher under conditions of maneuvering and oscillation of the object. The principle of operation of the gyrocompass is based on the utilization of the properties of a gyroscope and of the earth’s daily rotation. This idea was proposed by the French scientist J. Foucault.

The Foucault gyrocompass is a one-axis astatic gyroscope whose axis is movable in the horizontal plane. Because of the gyroscopic moment generated by the earth’s rotation, its axis tends to coincide with the plane of the meridian. Foucault’s gyrocompass was not used on moving objects that were subject to oscillations, but its basic idea was utilized in the development of some types of stationary gyrocompasses.

One- and two-rotor gyrocompasses based on the use of free gyroscopes are widely used on moving objects.

The single-rotor naval gyrocompass utilizes a free gyroscope whose center of gravity shifts in its equatorial plane below the suspension point—that is, a positional gyroscope. Depending on the method of generation of the pendulum effect, a distinction is made among gyrocompasses with a pendulum, with mercury vessels, and with indirect correction. In the pendulum gyrocompass (Figure 1), the rotor is enclosed in a chamber, with a weight attached to its lower part. The chamber is mounted in the outer gimbal suspension ring (not shown in Figure 1), whose axis of rotation is vertical. When the axis AB of the rotor is not in the plane of the meridian (when it is deflected to the east or west), it will deviate from the plane of the horizon because of the earth’s rotation, since the rotor, in accordance with the properties of a free gyroscope, tends to maintain its orientation relative to the stars. For example, if its end B deviates toward the east, it will rise, as if following the rise of the stars. Together with the axis AB, the chamber and weight will deviate with respect to the plane of the horizon. As a result, a moment of the force of gravity will be generated with respect to the suspension point, which will cause the precession of the axis AB toward the plane of the meridian. In its motion, the axis AB passes through the plane of the meridian, whereupon it begins to precess in the opposite direction under the influence of the gravity moment, and so on. After these oscillations have been extinguished by a special damping device, the axis AB becomes fixed in the plane of the meridian. 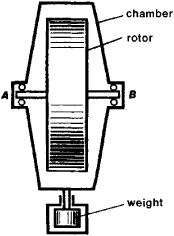 Figure 1. Schematic diagram of the sensing element of a one-rotor pendulum gyrocompass

In a mercury-vessel gyrocompass (Figure 2), the rotor and the chamber are balanced in such a way that their common center of gravity coincides with the point of suspension. A system of interconnected vessels that are partially filled with mercury is attached to the chamber. A so-called foot connecting the vessels with the chamber is attached to the right-hand vessel. Upon deviation of the gyroscope’s axis from the plane of the horizon, an excess of mercury in one of the vessels causes the application to the gyrocompass of a gravity force moment analogous to the moment in the pendulum gyrocompass. 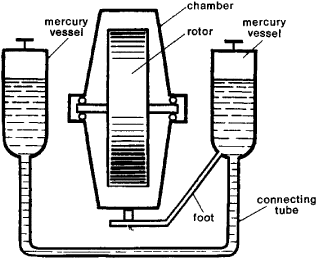 Figure 2. Schematic diagram of the sensing element of a one-rotor mercury-vessel gyrocompass

A gyrocompass with an indirect correction utilizes a free astatic gyroscope with a pendulum (accelerometer) installed in its chamber to record the angle of deviation of the gyroscope axis from the plane of the horizon. On the basis of the information concerning this angle, the instrument generates correction-moment signals, which are applied to the gyroscope by the corresponding moment transducers mounted on the axes of the gyroscope’s gimbal suspension. Similar instruments can also operate in the directional gyroscope mode.

The mercury-vessel gyrocompass is the more frequently used type of one-rotor gyrocompass.

The sensing element of the two-rotor gyrocompass (Figure 3)—the gyrosphere, or float—is a hollow sphere. The float contains two gyroscopes and a hydraulic stabilizer to damp the natural oscillations. The axes of the proper rotation of the gyroscopes are horizontal, whereas the axes of precession are vertical and are connected with the swivel mechanism by a coupler, which is connected to the float body by springs. In the initial state (when the rotors are stationary), the gyroscope’s axes form the angles є = 45° with the NS direction of the float. The center of gravity of the float is situated on its vertical axis below its geometric center, which generates the required pendulum moment, as in the one-rotor gyrocompass. The float is submerged in a liquid; therefore, only viscous friction occurs in the suspension. To provide stability of the gyrocompass during acceleration of the object, the parameters of the system are selected in such a way that the period of the float’s precession oscillations in the absence of damping is 84.4 min. The presence of two gyroscopes in the gyrocompass substantially reduces the errors of the instrument during the rolling of a ship. The error of a gyrocompass does not exceed several tenths of a degree of an arc when the ship is on a straight course with a constant speed. Gyrocompasses are widely used on naval vessels. 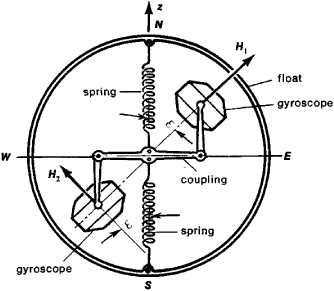 Figure 3. Schematic diagram of the sensing element of a two-rotor gyrocompass: NS and WE are the north-south and west-east directions, respectively; H1, and H2 are the kinetic moments of the gyroscopes.

A variety of the gyrocompass, the azimuth gyrocompass, is designed for determining a ship’s course and its angles of inclination with respect to the plane of the horizon. 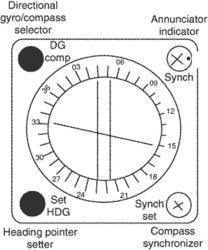 A compass that utilizes a gyro and its properties of rigidity in space. A gyrocompass is independent of magnetism and will attempt to align itself with the celestial meridian. However, it requires a steady source of motive power and is subject to dynamic errors under certain conditions. Certain aircraft compasses also use gyroscopes to gain stability while relying basically on the magnetic meridian. These should be distinguished from the true gyrocompass.
An Illustrated Dictionary of Aviation Copyright © 2005 by The McGraw-Hill Companies, Inc. All rights reserved

Feedback
Flashcards & Bookmarks ?
Please log in or register to use Flashcards and Bookmarks. You can also log in with
Flashcards ?
My bookmarks ?
+ Add current page to bookmarks
Mentioned in ?
References in periodicals archive ?
Miles, "Physician-Assisted Suicide and the Profession's Gyrocompass," Hastings Center Report 25, no.
Physician-assisted suicide and the profession's gyrocompass
Li, "Gyrocompass alignment method of sins based on kalman filtering pretreatment and dynamic gain adjustment on a rocking base," Information Technology Journal, vol.
Parameter Identification Method for SINS Initial Alignment under Inertial Frame
Along with the Flir Systems See Spot-III thermal imaging camera, the LP10 is a component of the forward observerI-2000 system, along with the Diehl Mk 11-7 north-finding gyrocompass and Vectronix Gonio Light electronic goniometer.
Forward to the point: the key to winning a ground engagement is to be found in the accurate placement of devastating firepower. Whether this firepower comes from artillery or from air strikes is arguably immaterial, what is vital is that it destroys the intended target rapidly, on first strike with minimal collateral damage and risk to friendly forces
Marine electronic devices comprise of marine VHF radios, autopilots, chart plotters, fish finders/sonars, gyrocompasses, radars, GPS, various audio & video devices and satellite TVs.
Global Marine Electronics Market Expected to Grow at a CAGR of 6.5% during 2018- 2028
Some sensors on the equipment include inertial measurement units, speed logs and gyrocompasses.
Spoofing Risks Prompt Military to Update GPS Devices