[¦jī·rō′stā·bə‚līz·ər]
(engineering)
A gyroscope used to stabilize ships and airplanes.
McGraw-Hill Dictionary of Scientific & Technical Terms, 6E, Copyright © 2003 by The McGraw-Hill Companies, Inc.
The following article is from The Great Soviet Encyclopedia (1979). It might be outdated or ideologically biased.

a gyroscopic device designed for stabilizing separate objects or instruments, as well as for determining the angular deviations of objects. According to their principle of operation, gyrostabilizers are divided into direct, force, and indicating types.

Direct gyrostabilizers are devices in which the stabilizing properties of a free gyroscope are utilized directly. Direct gyrostabilizers are used as roll dampers on ships and as stabilizers for monorail cars (the weight and dimensions of such gyrostabilizers are very important), as well as for stabilizing the sensing elements of control systems. For example, the gyrostabilizer shown in Figure 1, which consists of the chamber and rotor, mounted in the outer gimbal ring (frame), directly stabilizes the antenna and the coordinator. The coordinator generates signals proportional to the angles of deviation of the antenna’s axis from a given direction OA. These signals proceed through the amplifier-converters to the moment transducers of the correction system, which performs the automatic orientation of the antenna axis in the given direction. Gyrostabilizers of this type are called gyroscopic servomechanisms. 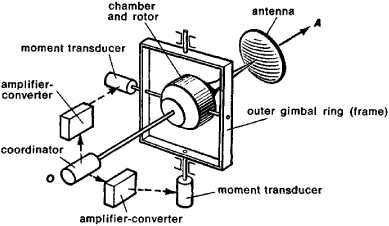 Powered gyrostabilizers (gyroframes) are electromechanical devices that contain, in addition to gyroscopes, special motors for overcoming the action of external disturbing moments on the object being stabilized. These gyrostabilizers are used on ships, aircraft, and other objects for stabilizing individual instruments and devices. In addition, the principle of gyroscopic powered stabilization is used in some types of directional gyroscopes, vertical gyroscopes, and combination devices, which are called gyroazimuth horizons. Powered gyrostabilizers may have one or two gyroscopes per frame and one, two, or three axes of stabilization.

The main elements of a uniaxial powered gyrostabilizer with one gyroscope (Figure 2) are the chamber and the rotor; the frame, which functions as the outer gimbal ring and is rigidly connected to the object being stabilized; the angle sensor, mounted on the axis of precessional Oη; the amplifier; the stabilizing motor, which is designed to apply relative to the axis of stabilization Oη moments that compensate for the external disturbing moments acting on the frame; and the pendulum corrector and moment transducer, which are elements of the gyrostabilizer correction system. Upon the action of an external disturbing moment M tending to turn the frame about the axis Oη, the chamber begins the precess, in accordance with its gyroscopic properties, about the axis Ox. In this case a gyroscopic moment Mg which opposes the moment M, arises. Subsequently, upon rotation of the chamber about the axis Ox through a certain angle β, the angle sensor actuates the stabilizing motor (through the amplifier), which applies with respect to the axis Oη the stabilization moment Ms, which is opposite to the moment M. As the result of this, the chamber starts to precess in the opposite direction and comes to a stop (at a constant value of M) in a position, in which Ms + M = 0. Thus, in a powered gyrostabilizer, the gyroscope performs the stabilization only at the initial moment. Subsequent stabilization is achieved by the stabilizing motor, which makes it possible to stabilize considerable masses using a gyroscope of moderate size and weight. Practical uses also include two-gyroscope gyro-stabilizers, which have a number of advantages as compared to the one-gyroscope variety. 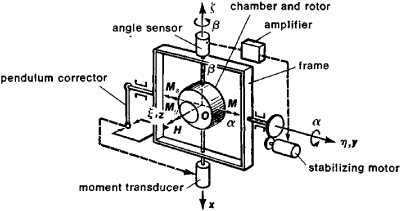 Indicator gyrostabilizers are automatic control systems in which the gyroscopic devices mounted on the object to be stabilized (for example, a platform) are the sensing or master elements, which determine the object’s position, and control servomechanisms. The stabilization of the object (platform), however, is performed by servomechanisms. Gyroscopes with two degrees of freedom (for example, integrating flotation gyroscopes) and rate gyroscopes or free astatic gyroscopes are used as the sensing elements, reacting to angular velocities or to angles of deviation of the platform. Indicating gyrostabilizers are used in inertial navigation systems installed on ships and in aircraft.

Feedback
Flashcards & Bookmarks ?
Please log in or register to use Flashcards and Bookmarks. You can also log in with
Flashcards ?
My bookmarks ?
+ Add current page to bookmarks
Mentioned in ?
References in periodicals archive ?
However, for bias errors in IMUs, rectified axes of the gyrostabilized platform have a set of Eulerian angles with corresponding axes of ENU frame.
For ENU frame, its origin o is located at the center of the gyrostabilized platform; three mutually orthogonal axes x, y, and z refer to the directions of east, north, and up, respectively.
Unified registration model for both stationary and mobile 3D radar alignment
PHOTO : Part of the US Army's FAADS, the Avenger consists of a gyrostabilized twin quadruple-tube launcher developed by Boeing Aerospace and mounted on a 4x4 Hummer.
Countering the low-level air threat: MANPADS; a handy anti-aircraft missile system for the infantryman