Hail from | Article about hail from by The Free Dictionary
https://encyclopedia2.thefreedictionary.com/hail+from
Printer Friendly

(redirected from hail from)
Also found in: Dictionary, Thesaurus, Idioms.

, city, Saudi Arabia
Hail (häˈēl, hīl), city (1993 pop. 176,757), N central Saudi Arabia. The city grew because of its location on a pilgrimage route from Iraq to Mecca. It was the capital of the independent emirate of Jabal Shammar, which Ibn Saud conquered in 1921.

, in meteorology
hail, precipitation in the form of pellets composed of ice or of ice and snow, occurring at any time of the year, usually during the passage of a cold front or during a thunderstorm. Small hailstones have a soft center and a single outer coat of ice. They are formed when the surfaces of snow clumps melt and refreeze or become coated with water droplets that subsequently freeze. Large hailstones usually have alternate hard and soft layers. There are various explanations of how these large stones form and grow. Some believe that they form in clouds when supercooled raindrops (i.e., drops chilled below the freezing temperature without solidifying) freeze on dust particles or snowflakes. These tiny hailstones are then blown repeatedly up and down by the winds in a cloud. Each time they are blown downward to a region whose temperature is above freezing, the stones collect more moisture, and each time they are blown upward to a region below freezing, the moisture solidifies into ice, and some snow may collect. The stones continue to grow, adding layer after layer, until they are too heavy to be supported by the winds and fall to the ground. In another explanation, it is suggested that hailstones continuously descend, gaining layers by passing through regions of the air that contain different amounts of water. Hailstones are spherical or irregularly spherical and usually vary in diameter up to 1-2 in. (1.3 cm); in rare cases hailstones having diameters up to 5 in. (12.7 cm) have been observed. Hail causes much damage and injury to crops, livestock, property, and airplanes. See sleet.
The Columbia Electronic Encyclopedia™ Copyright © 2022, Columbia University Press. Licensed from Columbia University Press. All rights reserved.
The following article is from The Great Soviet Encyclopedia (1979). It might be outdated or ideologically biased.

[hāl]
(meteorology)
Precipitation composed of lumps of ice formed in strong updrafts in cumulonimbus clouds, having a diameter of at least 0.2 inch (5 millimeters), most hailstones are spherical or oblong, some are conical, and some are bumpy and irregular.
McGraw-Hill Dictionary of Scientific & Technical Terms, 6E, Copyright © 2003 by The McGraw-Hill Companies, Inc. 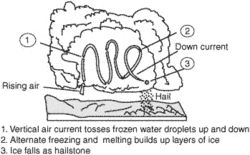 A product of a violent convection found in thunderstorms. In a storm, the strong vertical air swirls the raindrops above and below the freezing level. As a result, they are carried upward where they freeze. The particles grow by accumulation of water and snow at various levels and fall to the ground as hailstones, which can at times be larger than a golf ball. They fall either separately or agglomerated into irregular lumps. The symbol for hail on weather charts is Δ.
An Illustrated Dictionary of Aviation Copyright © 2005 by The McGraw-Hill Companies, Inc. All rights reserved

1. small pellets of ice falling from cumulonimbus clouds when there are very strong rising air currents
2. a shower or storm of such pellets
Collins Discovery Encyclopedia, 1st edition © HarperCollins Publishers 2005