See dipole.
Collins Dictionary of Astronomy © Market House Books Ltd, 2006
The following article is from The Great Soviet Encyclopedia (1979). It might be outdated or ideologically biased.

a radiator of electromagnetic waves that consists of a straight thin conductor or of a slot in the metal wall of a wave guide. The length of the conductor or slot is equal to approximately half the radiator’s operating wavelength. Half-wave dipoles are used, for example, as simple antennas for radio communication and as receiving antennas for television (Figure 1). They are also used as radiating elements of antenna arrays in communication and radar systems.

To the gap in the center of the dipole there is connected a feeder, or transmission line, which is either a balanced line or an unbalanced line with a balancing unit. The feeder connects the 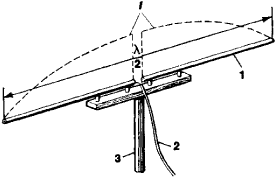