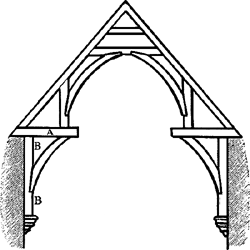 hammer beam: A
One of a pair of short horizontal members attached to the foot of a principal rafter in a roof, in place of a tie beam.
McGraw-Hill Dictionary of Architecture and Construction. Copyright © 2003 by McGraw-Hill Companies, Inc.

Feedback
Flashcards & Bookmarks ?
Please log in or register to use Flashcards and Bookmarks. You can also log in with
Flashcards ?
My bookmarks ?
+ Add current page to bookmarks
Mentioned in ?
References in periodicals archive ?
All efforts were concentrated on saving Westminster Hall, where the great lie in State, and its magnificent medieval hammer beam ceiling.
Commons Touch: Reason to remember
Named after John of Gaunt, who owned the castle in the 14th century, this magnificent banqueting hall with its hammer beam roof was reputed to be as important as Westminster Hall at that time.
MEDIEVAL LIFE: The man in touch with history; Paul Groves meets the craftsman who is recreating a medieval village in the shadow of Kenilworth Castle
The parish church of St Idloes,in Church Street, is said to have taken its 15th-century hammer beam roof from Abbey Cwmhir.
All about... LLANIDLOES
Beneath the 900-year-old hammer beam roof, under the sightless gaze of stone statues of the Saxon kings, the peers gathered on the western side of the south end of the hall, MPs on the eastern side.
Prince Charles sheds tears for his beloved grandmother; STATE OCCASION: Crowds line the route of royal procession as family gathers at ancient hall of Westminster where body of the Queen Mother will lie in state until Tuesday
Beneath the 900-year-old hammer beam roof, and under the sightless gaze of stone statues of the Saxon kings, the MPs gathered on the eastern side of the south end of the hall, the peers on the western side.
The Queen Mother (1900-2002): Grief amid the splendour
Now the once-dull columns reveal their original pink sparkling sandstone and the magnificent hammer beam roof has been cleaned to show the carved angels resplendent under new lighting.
St Martin flock returns home
Group spokesman Roger Armitage said: "It is definitely not Kirkburton as that was brick built with metal trusses, whereas the postcard has wooden hammer beams. It is not the main hospital at Royds Hall.
Lots of suggestions about hospital - but which one is right?
Upstairs, the hammer beams and groove on the original ceiling of what was once one large room, also reflects its grandeur.
Family life in the building that was once home to the 'Mother of Wales' Emily Lambert learns the colourful history of Berain, a very special Welsh country home