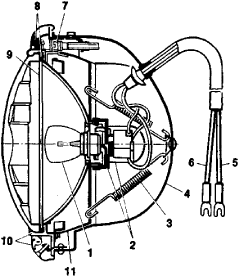 Feedback
Flashcards & Bookmarks ?
Please log in or register to use Flashcards and Bookmarks. You can also log in with
Flashcards ?
My bookmarks ?
+ Add current page to bookmarks
Mentioned in ?
References in periodicals archive ?
A vehicle must also earn no less than an 'Acceptable' rating in the passenger-side small overlap front, no lessthan an 'Acceptable' rating for headlights and no less than an 'advanced'rating for front-crash prevention.
2019 Audi e-tron SUV is the first pure battery-electric vehicle to earn 2019 IIHS 'Top Safety Pick+' rating
Six-in-10 of those affected said they regularly get dazzled by oncoming headlights with 45 per cent complaining they get dazzled by headlights in their rear-view mirror.
Drivers complain that dangerous headlight glare is getting worse, RAC study finds; Problem experience by staggering 16.1m motorists
The post Interactive headlights, tail light clusters help raise safety bar appeared first on Cyprus Mail .
Interactive headlights, tail light clusters help raise safety bar
RAC road safety spokesman Pete Williams said: "The intensity and brightness of some new car headlights is clearly causing difficulty for other road users.
Road risk from new car lights
"Headlights have long been treated as design elements instead of the critical safety equipment that they are," says IIHS President Adrian Lund.
Here are the safest vehicles on the road for 2018
The visual appeal, visibility and active safety of the new generation A8 can also now be enhanced by new headlights employing MatrixBeam Light Emitting Diode (LED) technology which sets new benchmarks.
AUDI S8 4.0 TFSI QUATTRO
By not illuminating the raindrops the headlights would avoid a common problem: in
Indian origin researcher's smart headlights that lets drivers see through rain
I AM writing with regard to the letter from DV of West Kirby (ECHO, Sep 10) regarding the need for motorcyclists to ride with their headlights on, and the intimidating manner in which they ride their motorcycles.
Advanced riding; You Say Email:letters@liverpoolecho.co.uk
All headlight restoration kits include sandpaper and polishing compound, and they all do a decent job.
Clear up cloudy headlights
So when you're cleaning the headlight, look for water inside the case.
Improved vision prevents a collision!
Even if a driver looks right at you and sees your headlight, they don't know how fast you are approaching.
Don't be invisible, use a little wiggle