[′hēt ‚pīp]
(engineering)
A heat-transfer device consisting of a sealed metal tube with an inner lining of wicklike capillary material and a small amount of fluid in a partial vacuum; heat is absorbed at one end by vaporization of the fluid and is released at the other end by condensation of the vapor.
McGraw-Hill Dictionary of Scientific & Technical Terms, 6E, Copyright © 2003 by The McGraw-Hill Companies, Inc.

A device that can quickly transfer heat from one point to another. Heat pipes are often referred to as the “superconductors” of heat, as they possess an extraordinary heat-transfer capacity and rate of transfer with almost no heat loss.
Illustrated Dictionary of Architecture Copyright © 2012, 2002, 1998 by The McGraw-Hill Companies, Inc. All rights reserved
The following article is from The Great Soviet Encyclopedia (1979). It might be outdated or ideologically biased.

a device for transporting large amounts of heat with small temperature differences.

A heat pipe consists of a sealed tube partially filled with a liquid heat-transport medium (see Figure 1). In the heated part of the tube (the heating, or evaporation, zone), the liquid evaporates as it absorbs heat; in the cooling part of the tube (the cooling, or condensation, zone), the vapor flowing from the evaporation zone condenses and releases heat. The flow proceeds from the evaporation zone to the condensation zone as a result of the pressure differential in the saturated vapor, which is determined by the difference between the temperature in the evaporation zone and the temperature in the condensation zone. The liquid is returned to the evaporation zone either as a result of external forces, such as gravity, or as a result of the pressure differential of capillary action in a capillary structure installed in the tube; this capillary structure, or wick, is set inside the heat pipe, usually on the pipe walls. Heat pipes with such a capillary structure for recycling the liquid are the most common type because they can operate independently of their orientation in a gravity field and in zero gravity. The effective heat conductivity of a heat pipe—the ratio of the density of the heat flow through the pipe to the drop in temperature per unit of length of pipe—is tens of thousands of times greater than the conductivity of copper, silver, or aluminum and can reach ~107 watts per meter per degree Kelvin. 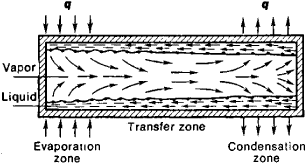 Figure 1. Diagram of the operation of a heat pipe: (q) heat flow along the heat pipe

Heat pipes are used in power engineering, chemical engineering, space technology, electronics, and many other engineering fields because of their low weight, high reliability, operating self-sufficiency, and high effective heat conductivity and because it is possible to use them as thermostatic devices.

A device for transferring heat efficiently between two locations by using the evaporation and condensation of a fluid contained therein. Heat pipes have many applications in areas where reliable performance and low cost are of prime importance—for example, in electronics and heat exchangers. See Heat exchanger

The heat pipe, the idea of which was first suggested in 1942, is similar in many respects to the thermosiphon. A large proportion of applications do not use heat pipes as strictly defined below, but employ thermosiphons (illus. a), sometimes known as gravity-assisted heat pipes. A small quantity of liquid is placed in a tube from which the air is then evacuated, and the tube is sealed. The lower end of the tube is heated, causing liquid to vaporize and the vapor to move to the cooler end of the tube, where it condenses. The condensate is returned to the evaporator section by gravity. Since the latent heat of evaporation is generally high, considerable quantities of heat can be transported with a very small temperature difference between the two ends. Thus the structure has a high effective thermal conductance. The thermosiphon, also known as the Perkins tube, has been used for many years. A wide variety of working fluids have been employed, ranging from helium to liquid metals.

Capillary forces are by far the most common form of condensate return employed, but a number of rotating heat pipes are used for cooling of electric motors and other rotating machinery. In some applications a mechanical pump is used to return condensate in two-phase run-around coil heat recovery systems. While this may be regarded as a retrograde step, it is a much more effective method for condensate return than reliance on capillary forces.

A tubular device that is very efficient in transferring heat. Using a metal container (aluminum, copper, etc.) that holds a liquid (water, acetone, etc.) under pressure, the inner surface of the tube is lined with a porous material that acts as a wick. When heat is applied to the outer area of the tube, the liquid inside the tube boils and vaporizes into a gas that moves through the tube seeking a cooler location where it condenses. Using capillary action, the wick transports the condensed liquid back to the evaporation area. See heat sink.

Feedback
Flashcards & Bookmarks ?
Please log in or register to use Flashcards and Bookmarks. You can also log in with
Flashcards ?
My bookmarks ?
+ Add current page to bookmarks
Mentioned in ?
References in periodicals archive ?
The snow melting system based on the heat pipe technology is shown in Figure 2.
Experimental Investigation of Concrete Runway Snow Melting Utilizing Heat Pipe Technology
Figure 3 exhibits the wholesome vapor flow field of the rotating heat pipe for the boundary condition as case 2, in which the heat load at the evaporator and the condenser is linearly distributed.
Preliminary Estimate of Coriolis Force of Vapor Flow in Rotating Heat Pipes Based on Analytical Solution
The form of heat pipe, working fluid, and effect of gravity has a considerable effect on its efficiency.
Experimental Study of [Al.sub.2][O.sub.3] Nanofluids on the Thermal Efficiency of Curved Heat Pipe at Different Tilt Angle
3-5 show the instantaneous variation during each day of the solar time, filling ratio, inclination angle and the hot water mass flow rate of the wickless heat pipe evacuated tube solar collector (HP-ETSC).
Experimental investigation on the performance of evacuated tube solar collector with wickless heat pipe under Iraq climatic conditions
Copper tube, having high thermal conductivity, was chosen for manufacturing the heat pipe. The sintered heat pipe's manufacturing can be divided into three processes--presintering, sintering, and postsintering.
Potential of U-shaped heat pipe heat exchanger in tropical climates for low sensible heat ratio applications
Heat pipes are sensible-only devices, and the performance of a heat pipe is dependent on the entering air conditions.
Wrap-Around Heat Pipes In Humid Climates
The single greatest advantage of heat pipe heat exchangers is their ability to contribute to energy and carbon reduction measures in line with a site's decarbonisation strategy.
Is heat transfer technology failing? Mike Griffin, emerging & innovation technology manager Northern Europe at Spirax Sarco, outlines the problems with conventional heat transfer design, and explains how technology is providing a solution that is both innovative and has the potential to pay for itself in double-quick time
Heat pipes seemed to Dr Jouhara an obvious solution to a major technical issue with solar cell or photovoltaic (PV) panels used to generate electricity.
NEW HYBRID SOLAR PANEL ROOF SLASHES ENERGY BILLS
Fujitsu has developed the world's first loop heat pipe less than 1 millimeter thick that can be added to small, thin electronics.
Fujitsu Develops Thin Cooling Device for Compact Electronics
"This exclusive distribution agreement will have a significant impact with OCC as it delivers HPT's energy-saving heat pipe systems to all its customers within the GCC region and beyond," said OCC's Navin Valrani.
UAE-based HVAC firm signs distribution deal