see air conditioningair conditioning,
mechanical process for controlling the humidity, temperature, cleanliness, and circulation of air in buildings and rooms. Indoor air is conditioned and regulated to maintain the temperature-humidity ratio that is most comfortable and healthful.
..... Click the link for more information. .

An electric device with both heating and cooling capabilities. It extracts heat from one medium at a lower (the heat source) temperature and transfers it to another at a higher temperature (the heat sink), thereby cooling the first and warming the second. Because they move heat rather than generate heat, heat pumps can significantly reduce energy costs. Air-source, ductless mini-split, geothermal, and absorption are some of the varieties of heat pumps used in homes.

a device that transfers thermal energy from a lowtemperature heat source, most often the environment, to a high-temperature heat receiver. The operation of a heat pump requires the consumption of external mechanical, electrical, chemical, or other type of energy. The processes that occur in a heat pump are similar to those involving the working fluid of a refrigerator, except that refrigeration equipment is designed to generate cold, whereas a heat pump generates heat. Liquids with a low boiling point, such as Freon or ammonia, are the working fluids normally used in a heat pump.

The heat flowing into the receiver of a heat pump consists not only of a quantity equivalent to the external work performed but also heat from a heat source, such as river water. Consequently, the energy conversion factor for a heat pump is always greater than 1, and the conversion process is more favorable than the direct conversion of electrical, mechanical, or chemical energy into heat. However, the trend in power engineering toward joint production of heat and electric power limits the use of heat pumps to situations in which other forms of thermal energy cannot be readily supplied—for example, in locations far from district heat and power plants.

Heat pumps are sometimes used for heating buildings in regions with warm climates, since the same unit may be using during the summer to cool incoming air. Because of fuel shortages, heat pumps were widely used during World War II (1939–45), particularly in countries that had a surplus of cheap hydroelectric power, such as Switzerland, Sweden, and Norway.

[′hēt ‚pəmp]
(mechanical engineering)
A device which transfers heat from a cooler reservoir to a hotter one, expending mechanical energy in the process, especially when the main purpose is to heat the hot reservoir rather than refrigerate the cold one.

The thermodynamic counterpart of the heat engine. A heat pump raises the temperature level of heat by means of work input. In its usual form a compressor takes refrigerant vapor from a low-pressure, low-temperature evaporator and delivers it at high pressure and temperature to a condenser (see illustration). The pump cycle is identical with the customary vapor-compression refrigeration system. See Refrigeration cycle

This dual purpose is accomplished, in effect, by placing the low-temperature evaporator in the conditioned space during the summer and the high-temperature condenser in the same space during the winter. Thus, if 70°F (21°C) is to be maintained in the conditioned space regardless of the season, this would be the theoretical temperature of the evaporating coil in summer and of the condensing coil in winter. The actual temperatures on the refrigerant side of these coils would need to be below 70°F in summer and above 70°F in winter to permit the necessary transfer of heat through the coil surfaces. If the average outside temperatures are 100°F (38°C) in summer and 40°F (40°C) in winter, the heat pump serves to raise or lower the temperature 30° (17°C) and to deliver the heat or cold as required.

The heat pump is also used for a wide assortment of industrial and process applications such as low-temperature heating, evaporation, concentration, and distillation. 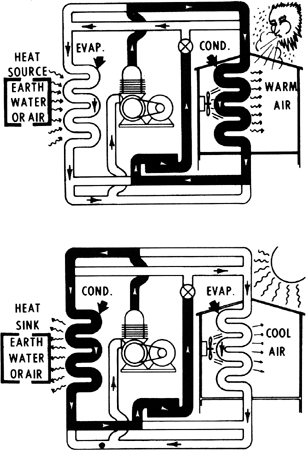 heat pump
A device that transfers heat from a cooler reservoir to a hotter reservoir by means of a heat exchanger, requiring the expenditure of mechanical energy in the process; used in an air conditioner whose cooling cycle can be reversed so that it can function as a heater.

Feedback
Flashcards & Bookmarks ?
Please log in or register to use Flashcards and Bookmarks. You can also log in with
Flashcards ?
My bookmarks ?
+ Add current page to bookmarks
TheFreeDictionary presents:
Write what you mean clearly and correctly.
Mentioned in ?
References in periodicals archive ?
While today's heat pumps generally work well and are environmentally friendly, they still have substantial room for improvement.
AI-Designed Heat Pumps Consume Less Energy
LG's advanced dryer incorporates the company's industry-leading DUAL Inverter Heat Pump to deliver efficient and effective drying that today's consumers desire.
LG to Aggressively Expand Market Reach of Advanced Dryer in 2019
The diversification of the economy along with growing hospitality and healthcare sectors would drive the kingdom's heat pump market, stated 6Wresearch in its new report titled "Saudi Arabia Heat Pump Market (2019-2025)."
Saudi Arabia's heat pump market set for solid growth
It's able to select the most favourable heat source or heat sink (for heating or cooling, respectively) in a way that allows it to operate as an air-to-water or brine-to-water heat pump. Therefore, in winter it can provide hot water for heating buildings, using either the air or the brine from the ground as heat sources.
Next-generation heat pump offers more affordable heating and cooling
We will see a significant growth in heat pumps in the coming years."
Down to earth energy move a bid to cut carbon-fuelled heat; Heat trapped in the ground is being targeted as a resource for use by North East homes and businesses, as PETER MCCUSKER reports
Main: Radiators won't get as hot with a heat pump. A ground source heat pump, pictured above, extracts its warmth from the earth
The heat is on; Have you considered fitting a heat pump at home? They're not cheap, but save cash in the long run by using renewable energy, says JULIA GRAY
5 Heat pumps warm the air gently, so they are not ideal if your home heats up and cools down quickly.
Use free energy to pump up heat; Extracting warmth from the Earth and using it for heating our homes and water is the latest innovation in renewable resources that could save you money in long run
Omnicon is aiding Thermolift's design team in the development of an electronic controller for their heat pump. A control strategy is being developed and modeled, and software is developed based on the model.
The Omnicon Group and Thermolift Announce a Better Heat Pump
As Figure 2 shows, a 50 ton (175 kW) water-to-water heat pump, which has two 25 ton (87.5 kW) scroll compressors, is connected with the existing hot-water and chilled-water piping in the building.
Performance analysis of a ground-source heat pump system using mine water as heat sink and source
1 GROUND or air source heat pumps are one environmentally friendly way to heat your home (water source heat pumps are available if you live beside a lake, river or stream).
Warming to alternative energy; YOUR Looking for a green heating solution? JULIA GRAY R has some op Y tions
To completely satisfy these needs, two smart heat pump units were installed.
Using Seawater for Urban Renewal Project: Smart Heat Pump
A taxpayer can claim the credit for expenses associated with geothermal heat pump property if the property is qualified geothermal heat pump property and the expenses meet the expenditure rules of Sec.
How to claim the residential energy-efficient property credit for geothermal heat pump property