type of aircraft in which lift is obtained by means of one or more power-driven horizontal propellers called rotors. When the rotor of a helicopter turns it produces reaction torque which tends to make the craft spin also. On most helicopters a small rotor near the tail compensates for this torque. On twin-rotor craft the rotors spin in opposite directions, so their reactions cancel each other. The helicopter is propelled in a given direction by inclining the axis of the main rotor in that direction. The helicopter's speed is limited by the fact that if the blades rotate too fast they will produce compressibility effects on the blade moving forward and stall effects on the rearward–moving blade, at the same time.

The method of flight used by the helicopter was considered by Leonardo da Vinci, in the 16th cent., who described its possibilities but could not provide a propulsion system. Best known among its developers are the French inventor Louis Breguet and the engineers Igor SikorskySikorsky, Igor Ivanovich
, 1889–1972, American aeronautical engineer, b. Kiev, Russia. He immigrated to the United States in 1919 and was naturalized in 1928. Sikorsky built and flew the first multimotored plane (1913) and established the world's endurance record for
..... Click the link for more information.  of the United States and Juan de la CiervaCierva, Juan de la
, 1895–1936, Spanish aeronautical engineer, inventor of a rotary-wing aircraft called an autogiro. He flew his first autogiro in 1923 and crossed the English Channel in an improved model in 1928. Bibliography

See his Wings of Tomorrow (1931).
..... Click the link for more information.  of Spain. The helicopter has become very popular for short-distance transportation, because of its maneuverability and ability to land and take off in small areas; it has been adopted for a wide range of services, including air-sea rescue, fire fighting, traffic control, oil platform resupply, and business transportation.

Helicopters have been widely adopted by the military since their first appearance during the Korean War. During the Vietnam War, they became the preferred platforms for transporting troops and evacuating wounded; in the Persian Gulf conflict helicopter gunships provided air cover for advancing tanks. Beginning in early 21st cent. some military helicopters were modified with stealth technologystealth technology,
designs and materials engineered for the military purpose of avoiding detection by radar or any other electronic system. Stealth, or antidetection, technology is applied to vehicles (e.g.
..... Click the link for more information.  to make them more difficult to track on radar.

a vertical takeoff and landing heavier-than-air craft in which lift is produced by one or several (more often two) rotors. (The Russian word vertolet has replaced the foreign derivation gelikopter.) The helicopter can take off vertically without a takeoff run and land vertically without a landing run, hover motionless above one location, rotate around its vertical axis in either direction, and fly in any direction with any velocity from zero up to its maximum. Upon forced in-flight shutdown of the engines, the helicopter can execute a gliding descent and landing, making use of autorotation of the rotors. In order to avoid blade stall and to increase the flight speed, some helicopters have a small wing that takes the load off the rotors.

A helicopter of any design consists of an airframe analogous to that of an airplane (a fuselage; undercarriage; control members; electrical, radio, and navigational instruments; and so on), a rotor system, a propulsion system, and a transmission. Single-rotor helicopters with mechanical drive also have a tail rotor and its control system.

The overwhelming majority of rotor assemblies are built with hinged blade mountings. Such a mounting makes it possible for the blades to flap, which ensures the balance of the helicopter over the entire range of its flight speeds. At the same time, because of blade stall, the flapping motion of the blades limits the flight speed to no more than 350-370 km/hr. In 1965 the American firm Lockheed developed helicopters with hingeless, semirigid rotors, in which the flapping motion of the ends of the blades is brought about through elastic bending of the blades. The development of rigid rotors, in which flapping motion was virtually eliminated, began in the 1960’s. Such rotors can be used only in a two-rotor coaxial system, which ensures the balance and control of the helicopter. Rigid coaxial rotors that do not stall permit flight speeds of 500-600 km/hr.

The three basic types of constructional realization of blades are a mixed construction with a steel tubular spar, an all-metal construction with a spar extruded from aluminum alloy, and an all-glass-fiber-reinforced plastic blade. The aerodynamic configuration of the blade depends on the type of helicopter and is determined by the takeoff conditions and the maximum tip speed at maximum flight speed.

The rotors are controlled by two systems: the cyclic pitch control (invented by B. N. Iur’ev in 1911) and the collective pitch control. The cyclic pitch control (see Figure 1) is located on the rotor shaft and consists of two rings connected by a universal joint to a fixed support. The inner ring is connected with longitudinal and lateral control rods; the outer ring is connected to the rods that control the blades. Under the influence of the control rods, the inner ring of the cyclic pitch control tilts, causing a sinusoidal variation of the blade angles in the feathering hinge and the appearance of the horizontal component of the rotor thrust, causing the forward motion of the helicopter and inclining it in the direction of motion. The collective pitch of the blades is controlled by rotating them simultaneously at the axial joint with respect to their longitudinal axis by means of levers and rods, which serves to change the vertical mode of flight: when the pitch of all the blades is increased simultaneously, the helicopter climbs; when the pitch is decreased simultaneously, it descends. 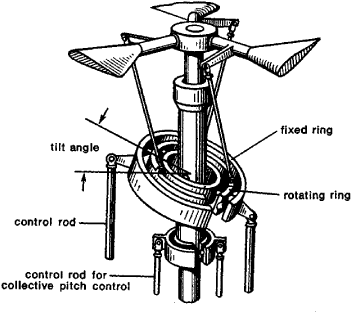 Longitudinal and lateral control is effected by means of the cyclic pitch control; directional control is effected by variation of the pitch of the tail-rotor blades (in single-rotor helicopters) or by the simultaneous variation of the collective pitch in opposite directions (in coaxial helicopters). In the transition to a powerless gliding mode (autorotation), the angle of the blades is decreased to 3°-5° by lowering the collective pitch control.

The greatest development of helicopter engineering has taken place in the USSR (scientific-design groups under the direction of M. L. Mil’ and N. I. Kamov), the USA (the Sikorsky, Boeing, Bell, and Kaman companies), France (Sud-Aviation), England (Westland), and Italy (Agusta). Helicopters are widely used in the national economy of the USSR in the battle against agricultural pests and diseases of orchards, vineyards, and valuable technical crops, as well as in the fertilization of seeds (Ka-15, Ka-26, Mi-1, and Mi-2); for transportation (Mi-4 and Mi-6) and passenger traffic (Mi-8); in performing geological-prospecting work (Ka-26); for gravimetric surveying (Ka-18); for ice reconnaissance (Mi-1 and Ka-15); for patrolling high-tension lines and gas and petroleum pipelines (Ka-18 and Ka-26); for transporting and installing heavy equipment, erecting towers, and other installation work (Mi-10); and for hospital and rescue work (Ka-18).

Helicopters are part of the armed forces of all major powers and are used for specific purposes: tactical air landings; the transportation of troops and freight; evacuation of wounded troops and damaged military equipment from the battlefield (military-transport helicopters); the destruction of firepower and of personnel and matériel that are deployed in the open; the laying of mines and other explosive antitank and anti-infantry obstacles and of smoke screens (direct troop-support helicopters); the search for and destruction of submarines (antisubmarine, ship, and base helicopters); conducting radiation, chemical, and engineering reconnaissance; and observing the battlefield and adjustment of artillery fire (air-reconnaissance helicopters). Helicopters are also used for minesweeping and spotting sweepers, boats, and so on; for performing rescue operations at sea and on land; for providing command liaison and as air command posts; for the laying of pontoon bridges and the crossing of water obstacles; and for radio jamming.

[′hel·ə‚käp·tər]
(aerospace engineering)
An aircraft fitted to sustain itself by motor-driven horizontal rotating blades (rotors) that accelerate the air downward, providing a reactive lift force, or accelerate the air at an angle to the vertical, providing lift and thrust.
McGraw-Hill Dictionary of Scientific & Technical Terms, 6E, Copyright © 2003 by The McGraw-Hill Companies, Inc.

An aircraft characterized by its large-diameter, powered, rotating blades. The helicopter can lift itself vertically by the reactive force generated as the rotating blades accelerate air downward. It can both lift and propel itself by accelerating air downward at an angle to the vertical. The helicopter is the most successful vertical takeoff and landing (VTOL) aircraft developed, by virtue of its relatively high efficiency in performing hovering and low-speed flight missions.

The key to understanding the operation and control of a helicopter lies in a knowledge of the forces and resultant motion of each rotor blade as momentum is imparted to the air. Unlike a fixed-wing aircraft, which derives its lift from the translational motion of the fuselage and airfoil-shaped wing relative to the air, the helicopter rotates its wings (or rotor blades) about a vertical shaft and thus is able to generate lift when the fuselage remains stationary.

Many different rotor arrangements have been used, and most of the early attempts at vertical flight were made with machines having multiple or coaxial counterrotating rotors. Most modern helicopters employ the single rotor or the tandem rotor configurations.

In addition to the selection of the number and location of the lifting rotors, designers have developed varied methods for attaching the blades to the rotor hub. Very early experiments conducted with the blades rigidly attached to the hub were unsatisfactory because of the excessive moments applied to the rotor mast. Based on the success achieved by the introduction of hinged attachments for the rotor blades, several configurations have been successfully manufactured. The teetering rotor used on two-bladed configurations has one central hinge which allows the blades to move in unison (one up, one down) like a seesaw. The gimbaled rotor is essentially equivalent to the teetering rotor and has been used on rotors with three or more blades. The articulated rotor has each blade attached to the hub by its own flapping hinge.

The growth of the helicopter industry in the United States is founded in the uses made by the armed forces. The technology which evolved to meet the needs of the military provided the base for an impressive growth in commercial applications. With such diverse operations as crop spraying, logging, construction, police and ambulance service, and passenger and corporate transportation, the industry has responded with a variety of commercial helicopters. See Vertical takeoff and landing (VTOL)

A rotorcraft deriving the whole or substantial part of its lift from one or more power-driven rotors. It is a heavier-than-air flying machine that is supported in the air by aerodynamic lift produced by engine-driven rotors.
An Illustrated Dictionary of Aviation Copyright © 2005 by The McGraw-Hill Companies, Inc. All rights reserved

an aircraft capable of hover, vertical flight, and horizontal flight in any direction. Most get all of their lift and propulsion from the rotation of overhead blades
www.helicoptermuseum.org/museum/links.htm
www.helikopter.li
Collins Discovery Encyclopedia, 1st edition © HarperCollins Publishers 2005