see goblingoblin
or hobgoblin,
in French folklore, small household spirit, similar to the Celtic brownie. Goblins perform household tasks but also can make mischief, such as pulling the covers off sleepers. They like wine and pretty children.
..... Click the link for more information. .
The Columbia Electronic Encyclopedia™ Copyright © 2013, Columbia University Press. Licensed from Columbia University Press. All rights reserved. www.cc.columbia.edu/cu/cup/ 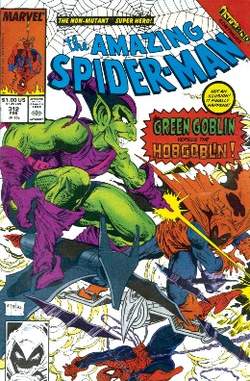 (pop culture)
Calculating, cackling, and cold-blooded, the Hobgoblin, a familiar yet dangerously different threat to the friendly neighborhood Spider-Man, first appeared in The Amazing Spider-Man vol. 1 #238 (1983). When escaping bank robber George Hill discovers one of the Green Goblin's abandoned lairs, complete with a cache of the Goblin's weapons— electrical blast-firing gloves, goblin grenades, exploding jack-o-lanterns, batwinged aerial Goblin Gliders, and a strength-enhancing formula—he calls an unidentified crime associate to whom he intends to sell this equipment. Hill's mystery contact kills him, keeping the arsenal for himself, modifying the supervillain's uniform to become the Hobgoblin, Spider- Man's newest challenge. The Hobgoblin challenged Marvel Comics readers as well. The character's co-creator, writer Roger Stern, countered the expectations to introduce a new Green Goblin to follow the original, Norman Osborn, and his successors, his son Harry Osborn and Bart Hamilton, by inventing an all-new character. As Stan Lee and Steve Ditko did two decades earlier with the identity of the Green Goblin, Stern and penciler Ron Frenz kept Hobgoblin's true identity a secret, tantalizing fans who speculated over the libertine's alter ego. Hobgoblin's identity had yet to be disclosed when Stern vacated the title in 1984. Over the course of several years and in the hands of several writers, unmasked and/or revealed as the Hobgoblin were financier Roderick Kingsley, goon-for-hire Arnold “Lefty” Donovan, Daily Bugle reporter Ned Leeds (whose body was found in a Hobgoblin uniform, leaving readers assuming for some time that he was the villain), and the former Jack O'Lantern Jason Macendale (the incarnation of the Hobgoblin that appeared on the 1994–1998 Spider-Man animated television cartoon, voiced by Mark Hamill); even long-time Spider- Man supporting-cast member Flash Thompson was discovered doped up and dressed as Hobgoblin. Confusing matters even more were the introductions of the Demogoblin in Web of Spider-Man #86 (1992)—N'Astirh, an otherwordly fiend that at first used Macendale's body as an earthly host then split into a separate Demogoblin form—and a fourth, superhero Green Goblin, Phil Urich, in 1995. What had originally seemed like a good idea had spiraled out of control with too many twists and red herrings, and Stern and Frenz reunited for the miniseries Spider-Man: Hobgoblin Lives (1997) to establish that Kingsley, Stern's original choice, was the real Hobgoblin. In the “Goblins at the Gate” storyline in Spectacular Spider-Man #259–#261 (1998), the original Green Goblin, Norman Osborn, who had recently returned from the dead, clashed with Hobgoblin. Kingsley retreated to the Caribbean, and the Hobgoblin has since remained in retirement, other than an occasional appearance as a collector-targeted mini-bust or action figure. The Ultimate Hobgoblin was part of the Ultimate Spider-Man's (2000–present) reimagining of the web-slinger. In this continuity, instead of succeeding his father as Green Goblin II, Norman Osborn's son Harry underwent a fiery transformation into a monstrous Hobgoblin, beginning in Ultimate Spider-Man #75–#76 (2005).
The Supervillain Book: The Evil Side of Comics and Hollywood © 2006 Visible Ink Press®. All rights reserved.

Feedback
Flashcards & Bookmarks ?
Please log in or register to use Flashcards and Bookmarks. You can also log in with
Flashcards ?
My bookmarks ?
+ Add current page to bookmarks
Mentioned in ?
References in periodicals archive ?
Mencken, once wrote: "The aim of practical politics is to keep the populace alarmed, (and hence clamorous to be led to safety), by menacing it with an endless series of hobgoblins, all of them imaginary".
NO FREE LUNCH
Hobgoblin 3D's managing director, Kevin Miree, said: "The advice and guidance of DIT really helped us refine our export strategy and make use of the channels most effective for our business model.
Board game figure designs are a winning idea globally
Tombstone Crow won the chance to perform at the festival after entering the Hobgoblin Metal 2 The Masses video contest.
Tombstone Crow to play major music festival
Of all Shakespeare's comedies, this tale of fairies, terrible actors and love mixed up by a meddling, incompetent hobgoblin, is the most perfect fit for a July night.
LIVE; MIDSUMMER NIGHT'S DREAM BOTANIC GARDENS, GLASGOW BARDINTHE BOTANICS.CO.UK
HOW LIDL BEER PRICES STACK UP ([pounds sterling]) Asda Lidl Morrisons Salisbury's Testo Hobgoblin 1.25 1.17 1.50 1.25 1.17 Old Speckled Hen 1.25 1.17 1.50 1.67 1.25 Bishops Finger 1.25 1.25 1.50 1.25 1.25 Spitfire Premium 1.25 1.25 1.50 1.67 1.25 McEwan's Champion 1.48 1.48 1.50 2.00 1.50 Source: Brand View 22 June 2015 (promotional prices including multibuys)
Lidl brings beer to the battle with new Brewery ales fixture
Tell us three of your best selling drinks: Deuchars IPA, Carling, Hobgoblin. What is your most popular meal?
Pot & Glass, Egglescliffe; YOUR PUB
HOBGOBLIN'S status as the "unofficial beer of Halloween" lifted pub chain Marston's as more drinkers turn away from big beer brands.
Popularity rise for real ale lifts Martson's sales
When asked about Rove's comments at a fiscal conference, Bill said consistency is the hobgoblin of little minds
Bill Clinton says Hillary not 'flesh-eating zombie' post Rove jibe
And ouds are not the only exotic instrument up for sale at Birmingham's Hobgoblin Music.
THAT'S WHAT I CALL WORLD MUSIC; Ouds, bazoukis, vihuelas - this shop sells them all..
Last year, he got into a fight with a student who snatched his baseball cap, a souvenir from Laos in Asia, at the Hobgoblin in New Cross.
Transformers Star Shia LaBeouf Kicked in Groin for Filming Vomiting Woman
Lee Mack headlines the Hobgoblin Leamington Spa Comedy Festival, which starts on October 12.
Mack at festival offering funnies for all the family
PEDIGREE and Hobgoblin brewer Marston's toasted higher profits yesterday as special offers such as Two for One on food boosted sales at its national chain of pubs.
Glass is half full for Marston's chief