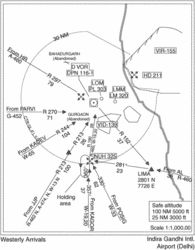 i. An area where aircraft are stacked at a height at defined height intervals when awaiting their turn to land. This area is the region of a holding fix. The holding area includes the basic holding area and the entry area. The basic holding area at any particular level is the airspace required at that level to encompass a holding pattern based on allowances for aircraft speed, wind effect, timing errors, holding fix characteristics, etc. The entry area includes the airspace required to accommodate the specified entry procedure.
ii. Run-up areas located at or near the ends of a runway for pilots to make final checks and await clearance for takeoff. These areas are generally large enough so that if an aircraft is unable to take off, another aircraft can bypass it. The holding area normally can accommodate two or three aircraft and allow enough space for one aircraft to bypass another. Also called run-up areas.
An Illustrated Dictionary of Aviation Copyright © 2005 by The McGraw-Hill Companies, Inc. All rights reserved

Feedback
Flashcards & Bookmarks ?
Please log in or register to use Flashcards and Bookmarks. You can also log in with
Flashcards ?
My bookmarks ?
+ Add current page to bookmarks
Mentioned in ?
References in periodicals archive ?
Faced with not being able to use the ammunition holding area until late August, the decision was made to salvage the poles from the old site and develop a workable plan.
Saving the Army time and money
Early work in the alert holding area saved time later, said Smith.
SDDC helps 25th Infantry Division move to two conflicts in two months
"Using the computerized stow planning capability is nothing new," said Hall, "however, the space management features were incorporated to assist in designing the 25th's deployment processing, convoy assembly, and port holding areas by zones that corresponded to the vessel load plan.
599th move 25th Infantry Division to Southwest Asia
The Multi-National Corps-Iraq requested that the Army Defense Ammunition Center (DAC) at McAlester, Oklahoma, assess theater ammunition supply points, ammunition holding areas, and basic load ammunition holding areas and help write applicable documentation for selecting sites for and licensing of ammunition and explosives (class V) storage locations.
Reachback cell creates explosives safety repository
The new purpose-built station's facilities will include six cells and two holding areas.
New Aber cop shop
On the Swiss side, drivers were advised to stay in holding areas in Ticino and Central Switzerland until the protest was over.
Truckers' blockade. (News)
There are four primary areas that can affect the air quality within the building: the compactor chute; hallway, kitchen and bathroom exhaust air ducts; hallway carpeting; and Sanitation Department recycling holding areas.
Indoor air quality a growing responsibility for managers