1. Zoology relating to the ability to return home after travelling great distances
2. (of an aircraft, a missile, etc.) capable of guiding itself onto a target or to a specified point
Collins Discovery Encyclopedia, 1st edition © HarperCollins Publishers 2005

[′hōm·iŋ]
(navigation)
A process in navigation by which the destination is approached by keeping some parameter constant.
McGraw-Hill Dictionary of Scientific & Technical Terms, 6E, Copyright © 2003 by The McGraw-Hill Companies, Inc. 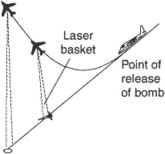 Smart bomb homes on to the target. In this case, laser designator pods helps the bomb to home onto the target.
i. The technique of tracking along a position line toward the point of a radio, radar, or other navigational aid. This is done without catering for wind but by adjusting the aircraft heading to maintain a relative bearing of zero degrees.
ii. The procedure for bringing two radios or other EM (electromagnetic) stations, at least one airborne, together.
iii. The following of a path of energy waves to or toward their source or point of reflection. This normally is used in the homing guidance of weapons.
iv. The procedure of using the direction-finding equipment of one radio station with the emission of another radio station, where at least one of the stations is mobile, and whereby the mobile station proceeds continuously toward the other station.
v. A bearing, or direction, to the base, or station, to which a request for “homing” is made. In Q code, it is QDM. See also QDM.
An Illustrated Dictionary of Aviation Copyright © 2005 by The McGraw-Hill Companies, Inc. All rights reserved