A horizontal strip on the Hertzsprung–Russell diagram of a globular cluster, to the left of the red-giant branch. It consists of low-mass stars that have lost mass during the red-giant phase; they all have absolute magnitudes of about the same value. Where the instability strip associated with pulsating variables crosses the horizontal branch, the stars are RR Lyrae stars; in a conventional H-R diagram of nonvariable stars, this appears as a gap in the horizontal branch.
Collins Dictionary of Astronomy © Market House Books Ltd, 2006

[‚här·ə′zänt·əl ′branch]
(astronomy)
A region in the Hertzsprung-Russell diagram of a typical globular cluster that extends in the blue direction from the giant branch at an absolute bolometric magnitude of 0.3 and consists of stars that are burning helium in their cores and hydrogen in their surrounding envelopes.
McGraw-Hill Dictionary of Scientific & Technical Terms, 6E, Copyright © 2003 by The McGraw-Hill Companies, Inc. 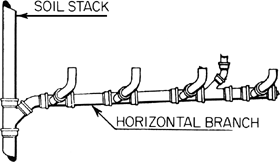 horizontal branch
A branch drain with a horizontal extension from a waste, soil, or vent stack, or from a building drain, which receives the discharge from a single fixture or a group of fixtures and conducts it to the soil or waste stack or to the building drain.
McGraw-Hill Dictionary of Architecture and Construction. Copyright © 2003 by McGraw-Hill Companies, Inc.

Feedback
Flashcards & Bookmarks ?
Please log in or register to use Flashcards and Bookmarks. You can also log in with
Flashcards ?
My bookmarks ?
+ Add current page to bookmarks
Mentioned in ?
References in classic literature ?
Here it pursued the depths of a glade, occasionally obliging you to stoop beneath vast horizontal branches; and now you stepped over huge trunks and boughs that lay rotting across the track.
View in context
Caption: Horizontal branch training all but eliminates auxin's influence, creating many short side shoots.
Pruning A Cut Above the Rest: Nothing more than a well-timed pinch can help you coax plants into bushiness, lankiness, or anything in between
Giving bucks a good-sized trunk plus a heavy horizontal branch can lead to high rubbing activity.
When you can get bucks to walk to a predictable spot in your hunting area, you're taking charge of your season
At clinical examination it was observed fever, decreased ruminal movements and mandibular swelling, more pronounced in the ventral-lateral face of caudal portion on the right horizontal branch of jaw (Figure 1).
Deforming mandibular osteomyelitis in a cow caused by Trueperella pyogenes/Osteomielite mandibular deformante em vaca causada por Trueperella pyogenes
Among the topics are precision observational asteroseismology using Kepler spacecraft data, updates on the pulsating sdB star Feige 48 through spectroscopy, glimpses into the secret lives of hot subdwarf stars, tidally enhanced stellar wind in binaries as a second parameter for the horizontal branch morphology of globular clusters, hot subdwarf stars as the donors of type Ia supernova progenitors, and a radial velocity survey of hot subdwarfs with main sequence companions using the Hobby-Eberly telescope.
Hot Subdwarf Stars and Related Objects; proceedings
The cowbird remained stationary near the main trunk on a horizontal branch of a white pine (Pinus strobus) as the adult warbler searched for food.
Evidence of cowbird parasitism on yellow-throated warblers at starved Rock State Park, Illinois, USA
The star is on the horizontal branch of the Hertzsprung-Russell diagram, meaning that it has already gone through its first excursion to red-gianthood and has since shrunk and re-heated.
Planet from another Galaxy
Specific topics covered include the UV spectrum of the galactic bulge, helium and the hot horizontal branch, binary population synthesis and sdB stars at different metallicities, and hypervelocity stars.
Hot subdwarf stars and related objects; proceedings
Assuming a cylindrical log shape with a central pith, a log transformed linear regression model was developed to predict minimum horizontal branch angle (branch azimuth) between successive knots, with respect to log size, that would produce at least one piece of lumber at a desired grade, by product, from the center cant using either an edge or centerline knot pattern.
A method to assess lumber grade recovery improvement potential for black spruce logs based on branchiness
A large horizontal branch from a neighboring oak blocked the buck's body.
An October lesson
We measured vertical and horizontal branch growth as a function of height and of light microenvironments in saplings [less than] 8 m tall and long lateral branch growth in saplings 1632 m tall.
Replacement patterns of beech and sugar maple in Warren Woods, Michigan