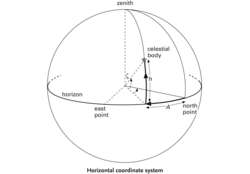 A coordinate system in which the fundamental reference circle is the observer's astronomical horizon and the zero point is the north point (see cardinal points). The coordinates are altitude and azimuth (see illustration).

The altitude (h) of a celestial body is its angular distance north (counted positive) or south (counted negative) of the horizon; it is measured along the vertical circle through the body and ranges from 0°, when the object rises or sets, to 90°, when the object is directly overhead at the zenith. The zenith distance (ζ) is the complement of the altitude (90° – h) and is frequently used instead of altitude in the horizontal system. The azimuth (A) of a body is its angular distance measured eastward along the horizon from the north point (or sometimes the south point) to the intersection of the object's vertical circle.

The horizontal system is simple but is strictly a local system. At any given moment a celestial body will have a unique altitude and azimuth for a particular observation point, the coordinates changing with observer's position. The coordinates of a star, etc., also change with time as the Earth rotates and the observer's zenith moves eastward among the stars.