(hīgrŏm`ətər), instrument used to measure the moisture content of a gas, as in determining the relative humidity of air. The temperature at which dew or frost forms is a measure of the absolute humidity—the weight of water vapor per unit volume of air or other gas at the temperature before cooling. Knowing absolute humidity and air temperature, the observer can calculate relative humidity. The most common type of hygrometer is the dry- and wet-bulb psychrometerpsychrometer
, one of many instruments used for measuring the water vapor content or relative humidity of the atmosphere. It consists of two identical thermometers—the wet-bulb thermometer, so called because its bulb is covered with a jacket of tight-fitting muslin cloth
..... Click the link for more information. . It consists of two identical mercury or electrical thermometersthermometer,
instrument for measuring temperature. Galileo and Sanctorius devised thermometers consisting essentially of a bulb with a tubular projection, the open end of which was immersed in a liquid.
..... Click the link for more information. , one of which has a wet cotton or linen wick around its bulb. Evaporating water from the wick absorbs heat from the thermometer bulb, causing the thermometer reading to drop. The difference between dry-bulb and wet-bulb temperatures are compared on psychrometric charts. The temperature at which dewdew,
thin film of water that has condensed on the surface of objects near the ground. Dew forms when radiational cooling of these objects during the nighttime hours also cools the shallow layer of overlying air in contact with them, causing the condensation of some water vapor.
..... Click the link for more information.  forms, called the dew point, is determined by a dew-point, or condensation-type, hygrometer, which is basically a mirror, usually of polished metal, cooled until dew or frost forms on it. Various cooling methods employ compressed carbon dioxide, dry ice, liquid air, or mechanical refrigeration. When dew or frost forms on the mirror, the temperatures between when dew appeared and when it disappeared is the dew point and is read with optical, electrical, or nuclear techniques. Because human observation varies, photoelectric cells are sometimes used to register the time at which the mirror fogs. Another type of hygrometer works on the principle that electrical resistance varies in a material that absorbs moisture, with the resistance to a current passing between wires measured by special sensors. The most accurate way to measure humidity is with an electric hygrometer, in which a known volume of gas passes over a hygroscopic, or moisture-absorbing, material such as phosphorus pentoxide. It is weighed before and after to determine how much water it took out of the gas. The older types of mechanical hygrometer use human hair, which stretches as it absorbs moisture, with a linkage connecting the center of a bundle of hairs under tension to a pointer. Another uses goldbeater's skin, a membrane from the intestines of oxen. Some materials can determine relative changes in humidity because they change color as they absorb moisture.
The Columbia Electronic Encyclopedia™ Copyright © 2013, Columbia University Press. Licensed from Columbia University Press. All rights reserved. www.cc.columbia.edu/cu/cup/

A device that measures relative humidity of air.
Illustrated Dictionary of Architecture Copyright © 2012, 2002, 1998 by The McGraw-Hill Companies, Inc. All rights reserved
The following article is from The Great Soviet Encyclopedia (1979). It might be outdated or ideologically biased.

a device for measuring atmospheric humidity. There are several types of hygrometers, whose operation is based on various principles—for example, the balance, hair, and film types.

A balance (absolute) hygrometer consists of a system of U-shaped tubes filled with a hygroscopic substance, which is capable of absorbing moisture from the air. A certain quantity of air is drawn through the system by a pump, and its moisture is determined. The absolute moisture is found by knowing the weight of the system before and after the measurement and the volume of air let through the system.

The operation of a hair hygrometer is based on the property of a grease-free human hair of changing its length upon a change in atmospheric humidity; by this method the relative humidity can be measured from 30 to 100 percent. The hair is stretched on a metal frame. The variation in the length of the hair is transmitted to an arrow that moves along a scale. The sensing element of a film hygrometer is an organic membrane that stretches when the humidity increases and shrinks when the humidity drops. A change in the position of the center of the film membrane is transmitted to an arrow. In the winter the hair and film hygrometers are the main instruments for measuring atmospheric humidity. The readings of the hair and film hygrometers are periodically compared with those of a more accurate device, a psychrometer, which is also used for measuring atmospheric moisture.

In an electrolytic hygrometer a plate of electrically isolating material (glass or polystyrene) is covered with a hygroscopic layer of an electrolyte (lithium chloride) and an adhesive material. When atmospheric moisture changes, the concentration and, consequently, the resistance of the electrolyte changes. The disadvantage of this hygrometer is that its readings depend on temperature.

The operation of a ceramic hygrometer is based on the dependence of the electrical resistance of a solid and porous ceramic (a mixture of clay, silicon, kaolin, and several metal oxides) on the humidity of the air.

Ever-increasing use is being made of electrolytic hygrometers with preheating. Their operation is based on the principle of measuring the dew point over a saturated saline solution (usually lithium chloride), which for a given salt is in a known dependence upon the moisture. The sensing element consists of a resistance thermometer with a fiberglass stocking soaked with a lithium chloride solution placed on its body; two electrodes of platinum wire are wound over the stocking, and AC current is fed to the electrodes.

[hī′gräm·əd·ər]
(engineering)
An instrument for giving a direct indication of the amount of moisture in the air or other gas, the indication usually being in terms of relative humidity as a percentage which the moisture present bears to the maximum amount of moisture that could be present at the location temperature without condensation taking place.
McGraw-Hill Dictionary of Scientific & Technical Terms, 6E, Copyright © 2003 by The McGraw-Hill Companies, Inc.

An instrument for giving a direct indication of the amount of moisture in the air or other gas, the indication usually being in terms of relative humidity as a percentage that the moisture present bears to the maximum amount of moisture that could be present at the location temperature without condensation taking place. There are three major types of hygrometers: mechanical, electrical, and cold-spot or dew-point.

In a simple mechanical type of hygrometer the sensing element is usually an organic material which expands and contracts with changes in the moisture in the surrounding air or gas. The material used most is human hair. As shown in the illustration, the bundle of hair is held under a slight tension by a spring, and a magnifying linkage actuates a pointer.

In an electrical hygrometer the change in the electrical resistance of a hygroscopic substance is measured and converted to percent relative humidity.

In a third group of hygrometers, commonly called dew-point apparatus, the dew-point temperature is determined; this is the temperature at which the moisture in the gas is at the point of saturation, or 100% relative humidity. The usual procedure is to chill a polished surface until dew or a film of moisture just starts to appear and to measure the temperature of the surface. 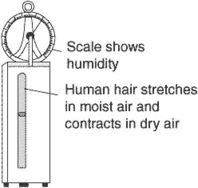 Hair hygrometer.
An instrument used to measure humidity in the air to determine its humidity. See also hairline hygrometer.
An Illustrated Dictionary of Aviation Copyright © 2005 by The McGraw-Hill Companies, Inc. All rights reserved

Feedback
Flashcards & Bookmarks ?
Please log in or register to use Flashcards and Bookmarks. You can also log in with
Flashcards ?
My bookmarks ?
+ Add current page to bookmarks
Mentioned in ?
References in periodicals archive ?
The chilled mirror hygrometer was a commercial instrument (5) that operated according to the basic definition of frost point (or dew point) by maintaining an even layer of frost on the chilled mirror in equilibrium with the moisture in the sample gas stream.
Potential Stable Low-Permeation Rate Standard Based on Micro-machined Silicon
This new FDW20 hygrometer can serve as a key product in future solutions envisaged by Yamatake to facilitate more precise atmosphere control in industries where there is an increasing need to make humidity (dew point) measurements for drier gases.
Yamatake Launches a Low Dew Point Version of its Compact Chilled Mirror Hygrometer
Watch your hygrometer to see if running the fireplace causes a significant increase in indoor relative humidity.
Windows with a cold sweat
* The pen-type pocket hygrometer is available through most scientific instrument catalogs.
The dog days of summer: humidity-measuring devices
The Cermet II dewpoint hygrometer is a panel mounted instrument designed for dewpoint measurement from -148 to +68 [degrees] F, with typical accuracy of [+ or -] 1.8 [degrees] F.
INSTRUMENTS
The company says the S8000 RS Precision Chilled Mirror Hygrometer measures dew points down to -90[degrees]C (0.1ppmV) with an accuracy of [+ or -]0.1[degrees]C, however, unlike many other chilled mirror hygrometers in this class, no additional external cooling equipment is needed to accurately reach these dry dew points.
Chilled mirror hygrometer
high-speed portable dew-point hygrometer, which features a custom-designed sampling kit, is capable of making reliable measurements in natural gas streams at up to 350 bar, giving readings that are representative of actual process conditions.
High-speed hygrometer is portable
How would you like to make a pinecone hygrometer? You can make it look like a wise owl to hang outdoors near your window.
Craft an owl hygrometer
The first known design for a hygrometer, an instrument to measure humidity, was described by Nicholas Cusa of Germany (1401-1464) in the mid-15th century.
Weather prediction is centuries-old tradition
A built-in dial hygrometer provides quick confirmation of interior low humidity.
Desiccator cabinets
The cabinet also features a door that holds a hygrometer for humidity measurement and, in some models, a more sophisticated electronic drying system, Eastman adds.
Space-saving design. (Plastics Applications)
A hygrometer -- used to measure humidity within the humidor -- is visible from outside.
TALKING, CIGAR IN MOUTH