(hīpûr`bələ), plane curve consisting of all points such that the difference between the distances from any point on the curve to two fixed points (foci) is the same for all points. It is the conic sectionconic section
or conic
, curve formed by the intersection of a plane and a right circular cone (conical surface). The ordinary conic sections are the circle, the ellipse, the parabola, and the hyperbola.
..... Click the link for more information.  formed by a plane cutting both nappes of the conecone
or conical surface,
in mathematics, surface generated by a moving line (the generator) that passes through a given fixed point (the vertex) and continually intersects a given fixed curve (the directrix).
..... Click the link for more information. ; it thus has two parts, or branches. The center of a hyperbola is the point halfway between its foci. The principal axis is the straight line through the foci. The vertices are the intersection of this axis with the curve. The transverse axis is the line segment joining the two vertices. The latus rectum is the chord through either focus perpendicular to the principal axis. The asymptotes are lines, in the same plane, which the curve approaches as it approaches infinity. An equilateral, or rectangular, hyperbola is one whose asymptotes are perpendicular. A second hyperbola may be drawn whose asymptotes are identical with those of the given hyperbola and whose principal axis is a perpendicular line through the center; the two hyperbolas thus related are called conjugate.
The Columbia Electronic Encyclopedia™ Copyright © 2013, Columbia University Press. Licensed from Columbia University Press. All rights reserved. www.cc.columbia.edu/cu/cup/

(hÿ-per -bŏ-lă) A type of conic section that has an eccentricity greater than one. See also orbit.
Collins Dictionary of Astronomy © Market House Books Ltd, 2006

The section of a right circular cone by a plane that intersects the cone on both sides of the apex.
Illustrated Dictionary of Architecture Copyright © 2012, 2002, 1998 by The McGraw-Hill Companies, Inc. All rights reserved
The following article is from The Great Soviet Encyclopedia (1979). It might be outdated or ideologically biased. 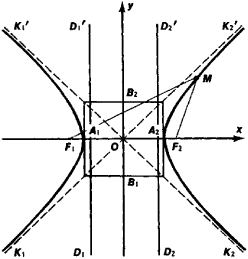 [hī·pər·bə·lə]
(mathematics)
The plane curve obtained by intersecting a circular cone of two nappes with a plane parallel to the axis of the cone.
McGraw-Hill Dictionary of Scientific & Technical Terms, 6E, Copyright © 2003 by The McGraw-Hill Companies, Inc.

a conic section formed by a plane that cuts both bases of a cone; it consists of two branches asymptotic to two intersecting fixed lines and has two foci. Standard equation: x2/a2 -- y2/b2 = 1 where 2a is the distance between the two intersections with the x-axis and b = a&#221A(e2 -- 1), where e is the eccentricity
Collins Discovery Encyclopedia, 1st edition © HarperCollins Publishers 2005

Feedback
Flashcards & Bookmarks ?
Please log in or register to use Flashcards and Bookmarks. You can also log in with
Flashcards ?
My bookmarks ?
+ Add current page to bookmarks
Mentioned in ?
References in periodicals archive ?
A notable finding was that in metabolically normal individuals, SVR was related to insulin response after oral glucose challenge independent of BMI, VAT, and MetS components, and those with higher SVR had better insulin secretory capacity of [beta]-cell (demonstrated as right shifted hyperbolas of [I.sub.0-30]/[G.sub.0-30] and [I.sub.30- 120]/[G.sub.30-120] versus Matsuda index), indicating that higher subcutaneous with lower visceral fat accumulation would exert beneficial effect on [beta]-cell function in the prevailing insulin sensitivity status.
Higher Ratio of Abdominal Subcutaneous to Visceral Adipose Tissue Related with Preservation of Islet [beta]-Cell Function in Healthy Individuals
In addition, the opening degree of hyperbola is increased with the buried depth increased.
Inversion Model of GPR Imaging Characteristics of Point Objects and Fracture Detection of Heritage Building
The remaining parts of this paper are arranged as follows: In Section 2, we develop the Laplace transform method for pricing American CEV Strangles option; in Section 3, we discuss the hyperbola contour integral method to compute inverse Laplace and give some stable conditions for HCIM.
Laplace Transform Method for Pricing American CEV Strangles Option with Two Free Boundaries
In general, intersecting hyperbolas is a strongly nonlinear problem, with obvious negative consequences on the computational cost and the sensitivity to noise in the measurements.
A Survey of Sound Source Localization Methods in Wireless Acoustic Sensor Networks
The solutions of the second equation are the hyperbolas (2) 2xy = C.
Lagrangian submanifolds in para-complex euclidean space
When this line of attack fails to pan out convincingly, the criticism shifts to the Lipsey-style equation--Samuelson and Solow had a hyperbola in mind.
Forder on Hall and Hart on the Samuelson-Solow Phillips Curve: Reply
Here it is shown that the monic quadratic equation with complex coefficients can also be solved graphically, by the intersection of two hyperbolas; one hyperbola being derived from the real part of the quadratic equation and one from the imaginary part.
Graphical solution of the monic quadratic equation with complex coefficients
where: G is the gravitational constant, M and m are the masses of the two objects, r is the distance between the two objects, c is the speed of light, p is the half normal chord for the object m moving around the object M along with a curve, and the value of p is given by: p = a(l-[e.sup.2]) (for ellipse), p = a ([e.sup.2]-l) (for hyperbola), p = [y.sup.2]/2x (for parabola).
An example of guiding scientific research with philosophical principles based on uniqueness of truth and neutrosophy deriving Newton's second law and the like
In other words, the experimental results are fitted to the theoretical curve of an equilateral hyperbola in the form Y = K/X, where K is a constant with a value equalling 30 mV; and the XY product (resistance x current) is the drop in potential that corresponds to the value of the constant, K, with units in volts.
The actions of lyophilized apple peel on the electrical activity and organization of the ventricular syncytium of the hearts of diabetic rats
Yes, they are carefully contrived missiles that contain (usually) a generous amount of hyperbola that stimulate our buying genes.
It's time to start dreaming
The curve in Figure 2 is called risk acceptability curve and corresponding hyperbola function is
Occupational risk assessment for the implementation of a management system of health and safety at work
So, even after the effect has been expanded by the multiplier, the AD curve has a very steep slope." Froyen (2013:51) states in a footnote that the aggregate demand curve in the Classical school is a rectangular hyperbola which, of course, has a unit elasticity with respect to the price level.
Economic expansion and the balance of trade: the role of aggregate demand elasticity