(hĭp`nətĭzəm) [Gr.,=putting to sleep], to induce an altered state of consciousness characterized by deep relaxation and heightened suggestibility. The term was originally coined by James Braid in 1842 to describe a phenomenon previously known as animal magnetism or mesmerism (see MesmerMesmer, Friedrich Anton
, or Franz Anton Mesmer
, 1734–1815, German physician. He studied in Vienna. His interest in "animal magnetism" developed into a system of treatment through hypnotism that was called mesmerism.
..... Click the link for more information. , Friedrich Anton). Superficially resembling sleep, it is generally induced by the monotonous repetition of words and gestures while the subject is completely relaxed. Although almost everyone can be hypnotized, individuals vary greatly in susceptibility. The hypnotic state is characterized by heightened suggestibility and represents an altered state of consciousness as recent research has shown electrical changes occur in brain activity when a person is hypnotized. Ernest Hilgard's neodissociation theory (1977) has been influential in the explanation of hypnosis. Hilgard's theory asserts that several distinct states of consciousness can be present during hypnosis, such that certain actions may become dissociated from the conscious mind. In the late 19th cent., it was used by a number of medical practitioners, who found that individuals susceptible to hysteriahysteria
, in psychology, a disorder commonly known today as conversion disorder, in which a psychological conflict is converted into a bodily disturbance. It is distinguished from hypochondria by the fact that its sufferers do not generally confuse their condition with real,
..... Click the link for more information.  are highly suggestible and can be put into deep hypnosis, sometimes leading to a cure. Sigmund FreudFreud, Sigmund
, 1856–1939, Austrian psychiatrist, founder of psychoanalysis. Born in Moravia, he lived most of his life in Vienna, receiving his medical degree from the Univ. of Vienna in 1881.

His medical career began with an apprenticeship (1885–86) under J.
..... Click the link for more information.  used the method in psychoanalysis. In recent years, hypnosis has been widely used by practitioners as an aid in medical practice and psychotherapy. Hypnosis is also used in some criminal investigations, to help defendants to recall events they might otherwise not remember.

A hypnotist at work, using a watch to lull his subject into a hypnotic state. Orlando/Hulton Archive/Getty Images. 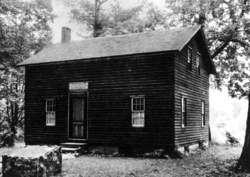 The Fox Family cottage in Hydesville, New York where sisters Margaretta and Kate lived when they began to communicate with spirit in 1848. The cottage was bought and moved to Lily Dale, New York by Benjamin Bartlett in 1916. Courtesy Fortean Picture Library.

Hypnotism, or hypnosis—from the Greek hypnos, meaning “sleep”—may occur spontaneously or may be induced by a trained hypnotist. A very large percentage of people are capable of being hypnotized. Shepard defines hypnotism as, “A peculiar state of cerebral dissociation distinguished by certain marked symptoms, the most prominent and invariable of which is a highly increased suggestibility in the subject.” The Encyclopedia Britannica says it is “applied to a unique, complex form of unusual but normal behavior which can probably be induced in all normal persons under suitable conditions … functioning at this special level of awareness is characterized by a state of receptiveness and responsiveness in which inner experiential learnings and understandings can be accorded values comparable with or even the same as those ordinarily given only by external reality stimuli.”

Edmunds (Hypnotism and Psychic Phenomena, 1961) makes the point that, “Despite the vast amount of enquiry and research that has been made and the numerous works on the subject that have been published, the true nature of hypnosis is still very much a mystery.” Yet hypnosis is almost as old as civilization itself. It was known to the shamans of primitive tribes, to priests and magicians of ancient civilizations such as Chaldea, Egypt, Greece, India, Persia, and Rome. It was used for both religious and therapeutic purposes. The Egyptian Ebers papyrus, dating from ca. 1500 BCE, describes the “laying-on of hands” treatment for disease and a bas relief from an ancient tomb at Thebes shows a priest seemingly in the act of hypnotizing a subject.

Modern hypnotism is a development of the early Mesmerism, introduced in 1772 by Count Friedrich (Franz) Anton Mesmer (1734–1815), a Viennese physician. Mesmer expounded the principles of “Animal Magnetism,” which then became known as Mesmerism. It was a system of healing based on the belief that a disturbance of equilibrium of a “universal fluid” causes disease in human beings. A magnetic readjustment of this invisible fluid would cure disease. In carrying out his therapies, Mesmer induced a hypnotic state without even being aware that he had done so. It was his pupil the Marquis Armand de Puysegur, who actually discovered the hypnotic trance. He termed it “artificial somnambulism.” It was not until 1841 that a Manchester, England, physician named Dr. James Braid became interested in the subject and in 1843, coined the terms “hypnotism” and “hypnosis.” In 1892, a British Medical Association committee unanimously accepted hypnotism as a genuine, valuable, therapeutic tool. After that not much progress was made until World War I when there was recognition of the re-educative possibilities of hypnotism, especially with the treating of shell shock. Further advances came with World War II, helping free the subject from many of the misconceptions, fears, and superstitions that had hampered its scientific investigation and acceptance.

In 1882, the Society for Psychical Research was established with the purpose of scientifically investigating “that large group of debatable phenomena designated by such terms as mesmeric, psychical, and spiritualistic.” Among the founding members were such people as Sir William Barrett, Edmund Gurney, William James, Professor Henry Sidwick, Frederick W. H. Myers, and Frank Podmore. Several of these, along with many of the early Spiritualists, had a great interest in Mesmerism. Another scientist with such an interest was Sigmund Freud, though he later abandoned hypnosis and concentrated on his own method of psychoanalysis.

Hypnotism has come to be used as a tool toward the development of clairvoyance and other mediumship phenomena. By using self-hypnosis, it is possible to bring about a suitable trance condition that will aid in bringing out latent mediumistic abilities. From working with self-hypnosis, a fledgling medium can then move on to spontaneous trance induction.

Feedback
Flashcards & Bookmarks ?
Please log in or register to use Flashcards and Bookmarks. You can also log in with
Flashcards ?
My bookmarks ?
+ Add current page to bookmarks
Mentioned in ?
References in periodicals archive ?
Nonetheless, the supernatural could not be completely eradicated from the discussion of hypnotism in the 1870s and 1880s.
PROGRESSION/REGRESSION: HYPNOTISM AND THE SUPERSTITIOUS IN MAUPASSANT'S LE HORLA
People have ideas that hypnotism is 'hocus pocus' but it is really about empowering people to overcome obstacles on their own.
Change Your Mind, Change Your Life During The 14th Annual World Hypnotism Day, January 4, 2018
The drive behind Coue's enterprise was the same as that expressed by Braid in his fifth public lecture on hypnotism in 1841: "my object is to dispel mystery, and elicit truth, in the simplest possible manner" (Yeates, 2013, p.
Emile Coue and his method (I): the chemist of thought and human action
Sounds just like The X Factor to Whether you believe in hypnotism suspected the contestants were playing along is irrelevant (for the record, I don't and did).
PHIL'S SPELL IS BROKEN
"Hypnotism is a scientific method to interact with one's subconscious mind.
'The magic of life is in its mystery'
Being a ghostwriter was not satisfactory, so the second version, Hypnotism Then And Now, came out as "by Peter Reveen as told to William Harwood".
Reviewer's Choice
audience, sunshiny, to squirm At what unsettles them in hypnotism? The
Ventriloquist
Smith used hypnotism and violence to groom and sexually abuse a young girl.
Paedophile found dead in prison
Even though Willow is not experienced, she reluctantly agrees to perform hypnotism on a few of her new friends from school.
Jabaley, Jennifer. Crush Control
AS World Hypnotism Day approaches British hypnotist Chris Hughes has announced that his highly successful Socialtrance online hypnosis event will return this week with a special online session targeted at weight loss.
Hypnotic weight loss event online
In this reprint of the 2000 3rd edition, Hunter (Tacoma Community College) furthers the work of his mentor, the late Charles Tebbetts, whose hypnotism training course formed the basis for many hypnoptherapy courses taught in the US and Europe.
The art of hypnosis; mastering basic techniques, 3d ed
I have always fancied learning hypnotism. Not to put myself in a trance, but to slip others under the influence.
I'm in a trance