[in′ər·shəl ‚nav·ə′gā·shən ‚sis·təm]
(navigation)
A self-contained system that can automatically determine the position, velocity, and attitude of a moving vehicle by means of the double integration of the outputs of accelerometers that are either strapped to the vehicle or stabilized with respect to inertial space. Also known as inertial navigator.
McGraw-Hill Dictionary of Scientific & Technical Terms, 6E, Copyright © 2003 by The McGraw-Hill Companies, Inc.
The following article is from The Great Soviet Encyclopedia (1979). It might be outdated or ideologically biased.

a navigation device whose operation is based on the classical (Newtonian) laws of mechanics. In an inertial navigation system an inertial system (an absolute system, that is, one that is stationary with respect to the stars) is the initial (main) frame of reference, with respect to which inertial measurements are made. The coordinates, velocity, and acceleration of an object, such as an aircraft, missile, spacecraft, or surface or submerged vessel, are determined by means of an inertial navigation system. Such systems have major, important advantages over other navigation systems— their universality of application, the possibility of determining the main parameters of motion, autonomy of action, and absolute noise resistance. These qualities have made inertial systems the most promising type of navigation system.

The principle of operation of inertial navigation systems consists in the simulation (representation) of the translational motion of an object, characterized by the change with time in the acceleration, velocity, and coordinates, which is similar to the process of motion of the sensing element (mass) of a three-dimensional (three-component) accelerometer (which, in the general case, has compensation for gravitational acceleration). The equation of motion of the sensing element in the inertial coordinate system is the main equation of the inertial method of determining the parameters of motion; in the general case it has the form

The essence of the inertial method is the measurement with an accelerometer of the initial parameter (acceleration) and the integration of the main equation—single integration to determine the velocity and double integration to determine the coordinates. The measuring axes of the accelerometers are oriented in preset directions by means of gyroscopic devices that are free or controlled (by signals from the accelerometers), such as a gyroscope, gyrostabilizer, or gyroframe, or by astrostabilizers, as well as by a combination of methods. Gyroscopic and electromechanical integrators are used to integrate the main equation. An inertial navigation system contains a plotter (an inertial vertical) or a computer of the direction of the local vertical. An inertial vertical has high precision and is not disturbed—that is, does not deviate from the local vertical—under horizontal accelerations. 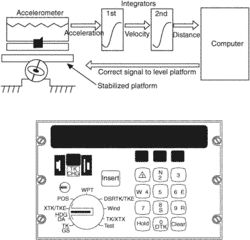 INS control and display panel.
A self-contained navigation system, comprising gyros, accelerometers, and a navigation computer, which automatically provides vehicle position, heading, velocity, and other navigational information in response to signals resulting from the inertial effect on system components. It does not require inputs from any external source. The vehicle's initial position is fed into a computer and further changes are related to acceleration in various axes, thus providing an up-to-date position. By programming a series of waypoints, the system can navigate along a predetermined track. New waypoints can be inserted, if required. The system accuracy is about 1 to 2 NM/h. The inaccuracies can be minimized if the system is updated at suitable points along the track at regular intervals.
An Illustrated Dictionary of Aviation Copyright © 2005 by The McGraw-Hill Companies, Inc. All rights reserved