Electromagnetic radiation in which wavelengths lie in the range from about 1 micrometer to 1 millimeter. This radiation therefore has wavelengths just a little longer than those of visible light and cannot be seen with the unaided eye. The radiation was discovered in 1800 by William Herschel.

An infrared source can be described by the spectral distribution of power emitted by an ideal body (a blackbody curve). This distribution is characteristic of the temperature of the body. A real body is related to it by a radiation efficiency factor or emissivity which is the ratio at every wavelength of the emission of a real body to that of a blackbody under identical conditions. The illustration shows curves for these ideal blackbodies radiating at a number of different temperatures. The higher the temperature, the greater the total amount of radiation. See Emissivity 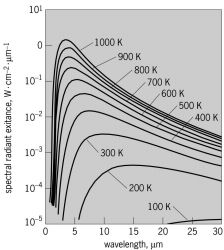 Radiation from blackbodies at different temperatures, shown on a logarithmic scale

Infrared techniques have been applied in military, medical, industrial, meteorological, ecological, forestry, agricultural, chemical, and other disciplines. Weather satellites use infrared imaging devices to map cloud patterns and provide the imagery seen in many weather reports. Infrared imaging devices have also been used for breast cancer screening and other medical diagnostic applications. In most of these applications, the underlying principle is that pathology produces inflammation, and these locations of increased temperature can be found with an infrared imager. Airborne infrared imagers have been used to locate the edge of burning areas in forest fires.

Electromagnetic radiation lying between the radio and the visible bands of the electromagnetic spectrum. The wavelengths range from about 0.8 micrometer (μm) to about 1000 μm. The definitions of the regions of the infrared are a little arbitrary, but are roughly as follows:

The region around 8–13 μm has been described as far-infrared by some astronomers. Radiation above 300 μm is now called submillimeter radiation.

electromagnetic radiation that occupies the spectral region between the red end of visible light (with a wavelength of λ = 0.74 microns [μ]) and shortwave radiation (λ ∼ 1–2 mm). The infrared region of the spectrum is usually subdivided conditionally into the near (λ ranges from 0.74 to 2.5 μ), middle, or intermediate (2.5−50μ), and far (50—2,000 μ) infrared regions.

Infrared radiation was discovered in 1800 by the British scientist W. Herschel, who observed an increase in the temperature of a thermometer placed outside the red end of the sun’s spectrum obtained with the aid of a prism (see Figure 1); that is, in the invisible part of the spectrum. It was proved in the 19th century that infrared radiation conforms to the laws of optics and consequently is of the same nature as visible light. In 1923 the Soviet physicist A. A. Glagoleva-Arkad’eva obtained radio waves with λ ∼ 80 μ, that is, waves that corresponded to the infrared range of wavelengths. Thus it was proved experimentally that there exists a continuous transition from visible radiation to infrared and radio-wave radiation, and consequently all are electromagnetic in nature. 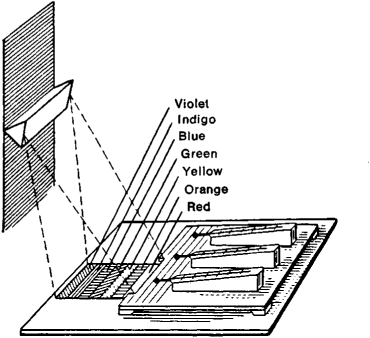 Figure 1. Herschel’s experiment. A thermometer placed beyond the red part of the sun’s spectrum showed a higher temperature than did the control thermometers placed to the side.

The spectrum of infrared radiation, like that of visible and ultraviolet radiation, may consist of individual lines or bands or may be continuous, depending on the nature of the source of the infrared radiation. Excited atoms or ions emit infrared line spectra. For example, mercury vapors on electrical discharge emit a number of narrow lines in the interval 1.014–2.326 μ, and hydrogen atoms emit a number of lines in the interval 0.95–7.40 μ. Excited molecules emit infrared band spectra owing to their oscillations and rotations. Vibration and vibration-rotation spectra lie primarily in the middle infrared region and pure rotation spectra lie in the far infrared region. Thus, for example, in the radiation spectrum of a gas flame, a band at about 2.7 μ, emitted by water molecules, and bands at λ ≈ 2.7 μ. and λ ≈ 4.2 μ, emitted by molecules of carbon dioxide, can be observed. Heated solid and liquid, bodies emit a continuous infrared spectrum. A heated solid radiates in a very broad range of wavelengths. At low temperatures (below 800°K) the radiation of a heated solid lies almost entirely in the infrared region, and such a body seems to be dark. As the temperature rises, the part of the radiation in the visible region increases and the body first appears to be dark red, then red, then yellow, and, finally, at high temperatures (above 5000°K), white. Here, both the total energy of radiation and the energy of the infrared radiation rise. 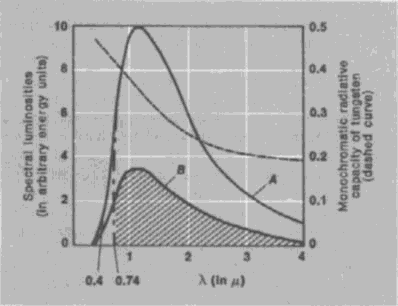 Figure 3. Radiation curves of an ideal blackbody A and tungsten B at a temperature of 2450°K. Shaded area is tungsten’s radiation in the infrared region; the interval 0.40–0.74 μ is the visible region.

Applications. Infrared radiation finds broad application in scientific research, in the solution of a large number of practical problems, in the military, and elsewhere. The investigation of emission and absorption spectra in the infrared region is used in the study of the structure of the electron shell of atoms, for the determination of the structure of molecules, and for qualitative and quantitative analysis of mixtures of substances of complex molecular composition, such as engine fuel.

In industry, infrared radiation is used to dry and heat materials and products upon irradiation and also to detect concealed flaws in products.

Special devices—image converters, in which the infrared image of an object at the photocathode, which is invisible to the eye, is converted into a visible image—have been developed on the basis of photocathodes that are sensitive to infrared radiation (for λ < 1.3 μ). Various infrared sight equipment (such as binoculars and sighting devices), which make it possible by irradiating the observed objects with infrared radiation from special sources to view or sight in total darkness, have been constructed on the basis of this principle. The development of highly sensitive infrared detectors has made it possible to build special devices—thermal direction finders for detecting and finding the direction to objects whose temperature is greater than the background temperature (such as the heated smokestacks of ships, aircraft engines, and the exhaust pipes of tanks) on the basis of their thermal infrared radiation. Guidance systems for projectiles and missiles have also been developed on the basis of the principle of thermal radiation. The special optical system and infrared detector located in the nose cone of a missile receive infrared radiation from a target whose temperature is higher than that of the surrounding medium (for example, the infrared radiation of aircraft, ships, plants, and thermal electric power stations), while the automatic servomechanism connected to the controls guides the missile precisely to the target. Infrared radars and range finders make it possible to detect any objects in the dark and to measure the distance to them.

Optical quantum generators, which radiate in the infrared region, are also used in ground and space communications.

[¦in·frə¦red ‚rād·ē′ā·shən]
(electromagnetism)
Electromagnetic radiation whose wavelengths lie in the range from 0.75 or 0.8 micrometer (the long-wavelength limit of visible red light) to 1000 micrometers (the shortest microwaves).
McGraw-Hill Dictionary of Scientific & Technical Terms, 6E, Copyright © 2003 by The McGraw-Hill Companies, Inc.

Feedback
Flashcards & Bookmarks ?
Please log in or register to use Flashcards and Bookmarks. You can also log in with
Flashcards ?
My bookmarks ?
+ Add current page to bookmarks
Mentioned in ?
References in periodicals archive ?
Nevertheless, drying rates were higher when infrared radiation was used than when using hot air, at least during the first 20 minutes of drying.
Infrared radiation inhibits browning of dried bananas
So the infrared radiation gives us a tool to control the cell.
Invisible infrared light could soon activate heart, ear cells
Nerve cells in the pit organ contain an ion channel called TRPA1 an infrared receptor that detects infrared radiation as heat, rather than as light, thus confirming theories of pit-organ function long held by behavioural ecologists.
Scientists reveal snake infrared detection
For instance, light from an extremely distant galaxy, recorded by an Earth-orbiting telescope as infrared radiation, was originally emitted by the galaxy as ultraviolet light.
Images from the edge: new views of star birth and baby galaxies
General considerations The infrared examination of carbon black-filled rubber compounds presented a challenging problem since carbon black is a strong absorber of infrared radiation and also causes extensive scattering of the incident radiation.
Direct non-destructive characterization of tire materials by spectroscopy
The Spitzer Space Telescope lacks the resolution to directly image a disk around a brown dwarf, but the pattern of excess infrared radiation detected around OTS 44 reveals the existence of a dusty disk, says study collaborator Lee Hartmann of the Harvard-Smithsonian Center for Astrophysics in Cambridge, Mass.
Puny Parent? Planets may form around tiny orbs
Compared with clear glass, the film in its heat-reflecting state could reduce by up to half the amount of room heating due to infrared radiation, estimates Ivan P.
Warm reflections: window tint kicks in when it's hot
In the new method, the researchers first use the sun's infrared radiation to heat molten sodium hydroxide mixed with water to oven temperatures that prime the water molecules to break apart.
Tapping sun's light and heat to make hydrogen
Previously known as the Space Infrared Telescope Facility and now renamed in honor of the late astronomer Lyman Spitzer Jr., the telescope records infrared radiation from some of the coldest, remotest and most-dust-obscured objects in the universe.
Orbiting telescope views infrared universe
Infrared radiation penetrates the Milky Way's dust, so Ibata's team relied on a recently completed near-infrared atlas of some 300 million stars.
Milky Way gobbles its closest known neighbor
Microwave and infrared radiation set the molecule spinning and vibrating.
Super spinner: seven-atom speck acts like superfluid