see calculuscalculus,
branch of mathematics that studies continuously changing quantities. The calculus is characterized by the use of infinite processes, involving passage to a limit—the notion of tending toward, or approaching, an ultimate value.
..... Click the link for more information. .
The Columbia Electronic Encyclopedia™ Copyright © 2013, Columbia University Press. Licensed from Columbia University Press. All rights reserved. www.cc.columbia.edu/cu/cup/
The following article is from The Great Soviet Encyclopedia (1979). It might be outdated or ideologically biased. 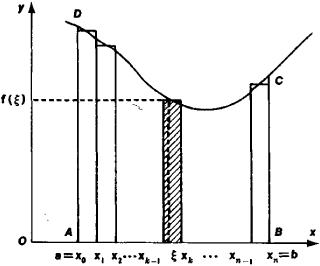 Definite integral. Suppose we are required to compute the area S of a “curvilinear trapezoid”—figure ABCD (see Figure 1)— bounded by the continuous curve y = f (x), by the interval AB on the axis of the abscissas, and by the two ordinates AD and BC. In order to calculate the area S, we divide the base AB (the interval [a,b]) into n subintervals (not necessarily equal) by means of points a = x0 < x1 < … < xn. 1 < xn = b, and designate their lengths by Δx1, Δx2, …, Δxn. On each of these subintervals we construct rectangles with altitudes f(ξ1), f(ξ2),…, f(ξn), where ξk is a point in the subinterval [xk –1,xk] (in Figure 1 the rectangle on the k th subinterval is shaded; f(ξk) is its altitude). The sum Sn of the areas of the rectangles is regarded as an approximation to the area 5 of the curvilinear trapezoid:

Using the summation symbol Σ (the Greek letter “sigma”) we write, for brevity,

The smaller the lengths Δxk of the subintervals, the more exact is the above expression for the area of the curvilinear trapezoid. In order to find the exact value of the area S, it is necessary to find the limit of the sums Sn as the number of points of subdivision increases without bound and the largest of the lengths Δxk tends to zero.

Setting aside the geometric content of our considerations, we arrive at the concept of the definite integral of a function f(x), continuous on the interval [a, b], as the limit, in the sense just described, of the integral sums Sn. This integral is denoted by

The symbol J (an elongated S—the first letter of the word summa) is called the integral sign,f(x) is the integrand, and the numbers a and b are the lower and upper limits of the definite integral. If a = b, then by definition,

The following are properties of the definite integral:

where k is a constant. It is also evident that

(The numerical value of the definite integral does not depend on the choice of designation for the variable of integration.)

Problems of finding areas bounded by curves (“quadrature” problems), lengths of arcs of curves (“rectification of curves”), surface areas of solids, and volumes of solids (“cubature” calculations) are all reduced to the calculation of definite integrals as are problems of determining the coordinates of centers of gravity, moments of inertia, the trajectory of a body from its known velocity of motion, the work produced by a force, and many other problems of natural science and technology. For example, the arc length of the plane curve defined by the equation y = f(x) on the interval [a, b] is expressed by the integral

and the surface area of that solid by the integral

The concept of the definite integral is extended to the case of unbounded intervals of integration as well as to certain classes of unbounded functions. Such generalizations are called improper integrals.

Expressions of the form

where the function f(x,a) is continuous in x, are said to be parameter-dependent integrals. They serve as fundamental means for studying many special functions (for example, the gamma function).

(“integral with a variable upper limit”) is one of the antiderivatives of the integrand. This yields the fundamental formula of the integral calculus (the Newton-Leibniz formula):

which expresses the numerical value of the definite integral as the difference of the values of any antiderivative of the integrand at the upper and lower limits of integration.

Unlike derivatives, integrals of elementary functions cannot always be expressed in terms of elementary functions; they cannot be expressed “in closed form.” Each of the available methods of integration in closed form has a limited area of applicability (integration methods are set forth in textbooks on mathematical analysis; comprehensive tables of integrals are given in many handbooks).

where P(x) and Q(x) are polynomials. Many functions that are not rational are also integrable in closed form, for example, functions rationally dependent on

(SeeINTEGRAL for extensions and generalizations of the concept of the integral.)

Historical notes. The integral calculus arose in connection with problems of determining areas and volumes. A number of problems of this kind were solved by ancient Greek mathematicians, who anticipated the ideas of the integral calculus to a significantly greater degree than those of the differential calculus. A large role in the solution of such problems was played by the method of exhaustion, which was established by Eudoxus of Cnidus and was used widely by Archimedes. However, Archimedes did not isolate the common content of the methods of integration or the concept of the integral and, furthermore, did not establish the algorithms of the integral calculus. The scholars of the Middle and Near East in the ninth to 15th centuries studied and translated the works of Archimedes into Arabic but did not obtain substantially new results in the area of the integral calculus. The work of European scholars during this time was even more modest. Only in the 16th and 17th centuries did the development of natural science in Europe give rise to new problems, in particular, problems on determining quadratures, cuba-tures, and centers of gravity. The works of Archimedes, first published in 1544 (in Latin and Greek), began attracting wide attention, and their study was one of the most important starting points for the further development of the integral calculus. The classical method of “indivisibles” was revived by J. Kepler. In more general form, the ideas behind this method were developed by B. Cavalieri, E. Torricelli, J. Wallis, and B. Pascal. A number of geometric and mechanical problems were solved by the method of indivisibles. To this same period belong the subsequently published works of P. Fermat on the quadrature of parabolas of the nth degree and later the works of C. Huygens on the rectification of curves.

As a result of these studies, the common features of the methods of integration used in the solution of outwardly dissimilar geometric and physical problems became apparent. This led to quadratures being viewed as the geometric equivalent of the definite integral. The final link in the chain of discoveries of this period was the establishment of the mutually inverse connection between problems of tangent construction and quadrature problems, that is, between differentiation and integration. The principal concepts and algorithms of the integral calculus were formulated independently by Newton and Leibniz. The term “integral calculus” and the designation of the integral by ∫ ydx were introduced by Leibniz.

[′int·ə·grəl ′kal·kyəl·ləs]
(mathematics)
The study of integration and its applications to finding areas, volumes, or solutions of differential equations.
McGraw-Hill Dictionary of Scientific & Technical Terms, 6E, Copyright © 2003 by The McGraw-Hill Companies, Inc.

Feedback
Flashcards & Bookmarks ?
Please log in or register to use Flashcards and Bookmarks. You can also log in with
Flashcards ?
My bookmarks ?
+ Add current page to bookmarks
Mentioned in ?
References in periodicals archive ?
The same data were used to determine which formative assessment has the best impact on the students' summative assessment which is the departmental examination in Integral Calculus. These data collected were analyzed using mean, standard deviation, and Pearson product measurement correlation and regression analysis.
Strengths of Formative Assessments (Daily Time-pressured Quiz, Homework and Portfolio) on Students' Summative Assessment Performance in Integral Calculus
This research aimed to: 1) determine the level of students' mathematics comprehension and previous mathematics performance; 2) determine the level of students' conceptual understanding of finding the area of plane regions in Integral Calculus; and 3) determine the impact of students' mathematics comprehension and previous mathematics performance on their conceptual understanding of finding the area of plane regions in Integral Calculus.
Students' Mathematics Comprehension and Previous Mathematics Performance (PMP): Its Impact on Students' Conceptual Understanding in Determining Area of Plane Regions in Integral Calculus
The text is highly technical, with many color maps, graphs, and illustrations, and equations utilizing up to differential and integral calculus.
Basin analysis; principles and application to petroleum play assessment, 3d ed
of Barcelona) sets out the basic facts of linear functional analysis and its applications to some fundamental aspects of mathematical analysis, for graduate students of mathematics familiar with general topology, integral calculus with Lebesgue measure, and elementary aspects of normed or Hilbert spaces.
Linear functional analysis
One central idea of integral calculus is that both the Riemann Lower Sum, and the Riemann Upper Sum are approximations for the area under the graph of y = f( x) (see [3] and [4]):
Computing Limits through Riemann Sums
There are many applications of integral calculus and developing a deeper understanding of some of the numerical methods will increase understanding of the techniques.
Numerical integration
There are four chapters: The Nature of the Infinite Process, The Definite Integral, Differential and Integral Calculus, and Applications to Problems of Motion.
The Calculus: A Genetic Approach
PC Macsyma performs basic and matrix algebra and trigonometry, differential and integral calculus, and vector and tensor analysis.
Garbage collector
Authors Morris and Stark present students and academics with a comprehensive introduction to both differential and integral calculus using real-world examples from a variety of fields, including entrepreneurship, economics, environmental science, and the social sciences.
Fundamentals of Calculus
Kuhfittig (Milwaukee School of Engineering) offers a textbook introducing differential and integral calculus within a two-year technology program, but says it could also be used along with others in a four-year program.
Technical calculus with analytic geometry, 5th ed
(For some discussion of the relative importance of the algorithmic approach to learning and the conceptual approach, see Pettersson and Scheja (2008).) Secondly, the formal manipulations required for high school differential calculus questions are simpler than those for integral calculus.
Integration: reversing traditional pedagogy
This intermediate-level textbook explains probability and statistics to undergraduate and graduate students in engineering, physical sciences, and management who have knowledge of college algebra, differential and integral calculus, and some linear algebra concepts.
Statistics for Scientists and Engineers