(also integrated microcircuit), a microminiaturized electronic device, all or some of whose components are inseparably structurally linked and are interconnected electrically. There are two basic types: semiconductor integrated circuits and thin-film integrated circuits.

Semiconductor integrated circuits (Figure 1) are manufactured from extremely pure semiconductor materials (usually silicon or germanium), whose crystal lattice is modified in such a way that individual regions of a crystal become components of a complex circuit. A small chip of crystalline material, with an area of about 1 sq mm, becomes a very complex electronic device, equivalent to a radio engineering unit of 50–100 or more conventional components. Such a device is capable of amplifying or generating signals and of functioning in many other radio engineering applications. 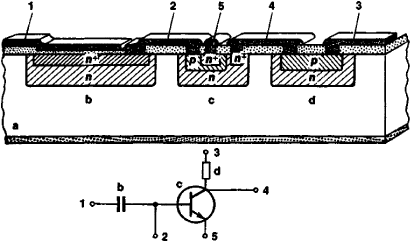 Thin-film integrated circuits are made by deposition of various materials at a low pressure (on the order of l X 105 mm of mercury [mm Hg]) as thin films (less than 1 micron [M] thick) or thick films (more than 1 μ thick). The film is deposited on a polished substrate, usually a ceramic, that has been preheated to a particular temperature. Materials used for the film include aluminum, gold, titanium, nichrome, tantalum oxide, silicon monoxide, barium titanate, and tin oxide. To produce integrated circuits with specific functions, multilayer thin-film structures are created by deposition of materials with the required properties on the substrate through a mask or stencil. In such structures one of the layers contains microresistors, another layer contains microcapacitors, and several other layers contain interconnecting current conductors and other components. All components in these layers are interconnected in an arrangement characteristic of the particular electronic device.

Thin-film components are widely used in hybrid integrated circuits (Figure 2). In such systems the passive components (resistors, capacitors, and conductors) are deposited first on the substrate as thin or thick films, and then the active semiconductor microcomponents (nude transistors and diodes) are mounted with the aid of micromanipulators. 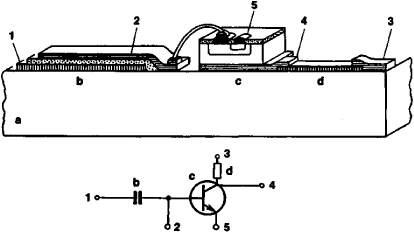 [′int·ə‚grād·əd ′sər·kət]
(electronics)
An interconnected array of active and passive elements integrated with a single semiconductor substrate or deposited on the substrate by a continuous series of compatible processes, and capable of performing at least one complete electronic circuit function. Abbreviated IC. Also known as integrated semiconductor.
McGraw-Hill Dictionary of Scientific & Technical Terms, 6E, Copyright © 2003 by The McGraw-Hill Companies, Inc.

a very small electronic circuit consisting of an assembly of elements made from a chip of semiconducting material, such as crystalline silicon
Collins Discovery Encyclopedia, 1st edition © HarperCollins Publishers 2005

(electronics)
(IC, or "chip") A microelectronic semiconductor device consisting of many interconnected transistors and other components. ICs are constructed ("fabricated") on a small rectangle (a "die") cut from a Silicon (or for special applications, Sapphire) wafer. This is known as the "substrate". Different areas of the substrate are "doped" with other elements to make them either "p-type" or "n-type" and polysilicon or aluminium tracks are etched in one to three layers deposited over the surface. The die is then connected into a package using gold wires which are welded to "pads", usually found around the edge of the die.

Integrated circuits can be classified into analogue, digital and hybrid (both analogue and digital on the same chip). Digital integrated circuits can contain anything from one to millions of logic gates - inverters, AND, OR, NAND and NOR gates, flip-flops, multiplexors etc. on a few square millimeters. The small size of these circuits allows high speed, low power dissipation, and reduced manufacturing cost compared with board-level integration.

LSI circuits began to be produced in large quantities around 1970 for computer main memories and pocket calculators. For the first time it became possible to fabricate a CPU or even an entire microprocesor on a single integrated circuit. The most extreme technique is wafer-scale integration which uses whole uncut wafers as components.

The formal name of the chip. An integrated circuit (IC) combines multiple transistors, resistors and capacitors on a single substrate. Prior to integrated circuits, these electronic components were discrete devices wired to each other on a printed circuit board.

In 1958, Texas Instruments inventor Jack Kilby demonstrated the concept. Although integrated circuits did not become commercialized until Robert Noyce of Fairchild Semiconductor developed his silicon-based device a couple months later, Kilby's circuit proved that multiple electronic devices could be constructed as a single unit. See chip, microcontroller and transistor.

Feedback
Flashcards & Bookmarks ?
Please log in or register to use Flashcards and Bookmarks. You can also log in with
Flashcards ?
My bookmarks ?
+ Add current page to bookmarks
Mentioned in ?
References in periodicals archive ?
The report performs segmentation of the Application-Specific Integrated Circuit (ASIC) market so that the readers can understand complex market insights clearly by concentrating on each segment separately.
Application-Specific Integrated Circuit (ASIC) Market Getting Larger With Great CAGR By 2026 : Texas Instruments, STMicroelectronics, Intel Corporation, Infineon Technologies, Maxim Integrated, Analog
A final lesson from the silicon integrated circuit industry involves the very limited proliferation of different wafer processes.
GaAs MMICs: some lessons from silicon
Invented by Jack Kilby of Texas Wnstruments in 1958, the integrated circuit belongs to the family of semiconductors that includes transistors and diodes.
Amazing Integrated Circuits
"Using traditional build-and-test methods, it would have probably taken a year to identify a design that maintained junction temperatures at or below specifications," said Frank Mortan, a packaging engineer for Texas Instruments of Dallas, which supplied the disk-brake integrated circuit to the manufacturer.
Cutting the circuit's heat
By working with the design centers, chipmakers can create integrated circuit designs optimized for Tower's manufacturing process technologies.
Tower Semiconductor expedites production of mixed-signal integrated circuit for Smart Link
Models based on this mechanism explain why deposition of metal occurs predominantly at the bottom of sub-micrometer dimension trenches and vias, leading to bottom-to-top filling of high aspect ratio features, an essential ingredient of integrated circuit fabrication in today's electronics.
CVD and electrodeposition phenomena link revealed. (News Briefs)
The heart of a computer is a fingernail-sized chip, or integrated circuit, that includes transistors, diodes, and other devices that can manipulate electrons.
Getting Nanowired
Auto Business News-June 8, 2017--Valens to launch VA6000 HDBaseT Automotive integrated circuit
Valens to launch VA6000 HDBaseT Automotive integrated circuit