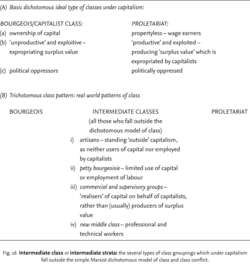 Fig. 16 Intermediate class or intermediate strata: the several types of class groupings which under capitalism fall outside the simple Marxist dichotomous model of class and class conflict.

(MARXISM) in CAPITALIST SOCIETY, those CLASSES standing intermediate between the capitalist (or bourgeois) class and the PROLETARIAT, and belonging to neither (see Fig. 16). As summarized by Hodges (1961), these class groupings can be seen as consisting of transitional’ classes of four basic types:

In the classical Marxist view, these class locations are seen as likely to be transitional under capitalism, though in different ways. Thus (a) and (b) can be held to consist mainly of a survival from precapitalist patterns of class, and as tending to decline in importance, while (c) and (d) are hypothesized to crystallize into capitalist or proletarian positions, given the tendency for CLASS POLARIZATION to occur in capitalist societies. In the main, this process of crystallization was assumed likely to be in the direction of PROLETARIANIZATION, or at least include an increasing recognition by the members of these classes of interests opposed to capitalism. Subsequent empirical patterns of class locations, CLASS CONSCIOUSNESS and class action among intermediate groups, however, suggest a complexity of CLASS INTERESTS, which has lead to a great variety of neo-Marxist and non-Marxist accounts and theories of class within capitalist societies and the place of intermediate class groupings within these. See also CAPITALISM AND CAPITALIST MODE OF PRODUCTION, CLASS BOUNDARIES, MULTIDIMENSIONAL ANALYSIS OF SOCIAL STRATIFICATION, COLLECTIVE LABOUR, CONTRADICTORY CLASS LOCATIONS, DAHRENDORF, INTELLECTUAL LABOUR, NEW CLASS, PROFESSION, SERVICE CLASS, SOCIAL CLOSURE, STATUS CONSISTENCY AND INCONSISTENCY.

Feedback
Flashcards & Bookmarks ?
Please log in or register to use Flashcards and Bookmarks. You can also log in with
Flashcards ?
My bookmarks ?
+ Add current page to bookmarks
Mentioned in ?
References in periodicals archive ?
A model is developed to predict the critical thickness of the water-bearing rock between the karst cavity and the tunnel utilizing the plastic theory and the mechanical balance of intermediate strata [10].
Using the Schwarz Alternating Method to Identify Critical Water-Resistant Thickness between Tunnel and Concealed Cavity
It must result from a perfect timing among cell proliferation in the basal stratum, vertical migration through the intermediate strata, and shedding in the outermost layer of the epithelium.
Maintenance of the corneal epithelium is carried out by germinative cells of its basal stratum and not by presumed stem cells of the limbus
Vertical Distribution: Intermediate strata registered highest diversity (Fig.
These studies also noticed highest epiphytic diversity in the intermediate strata. The exception is Kersten & Silva (2001) that registered the lower strata as the richest.
Intermediate strata regularly have more branches and ramifications, and therefore larger areas available for colonization.
Diversity and distribution of vascular epiphytes in an insular Brazilian coastal forest