muscular hoselike portion of the gastrointestinal tract extending from the lower end of the stomach (pylorus) to the anal opening. In humans this fairly narrow (about 1 in./2.5 cm) tubelike structure winds compactly back and forth within the abdominal cavity for about 23 ft (7 m), and is known as the small intestine. It is not only an organ of digestion (for that part of the process not completed by the stomach) but is the chief organ of absorption. By contraction of its muscular walls (peristalsis) the food mass is propelled onward and, as it is carried along, it is subject to the digestive action of the secretions of the intestinal lining as well as to that of bile and pancreatic juice which enter the upper intestine (duodenum) from ducts leading from the liver and pancreas. Innumerable minute projections (villi) in the intestinal mucous lining absorb the altered food for distribution by the blood and lymphatic systems to the rest of the body. Food continues to pass into the middle (jejunum) and end (ileum) of the small intestines.

See digestive systemdigestive system,
in the animal kingdom, a group of organs functioning in digestion and assimilation of food and elimination of wastes. Virtually all animals have a digestive system. In the vertebrates (phylum Chordata, subphylum Vertebrata) the digestive system is very complex.
..... Click the link for more information. .

The tubular portion of the digestive tract, usually between the stomach and the cloaca or anus. The detailed functions vary with the region, but are primarily digestion and absorption of food.

The structure of the intestine varies greatly in different vertebrates, but there are several common modifications, mainly associated with increasing the internal surface area. One, seen in many fishes, is the development of a spiral valve; this turns the intestine into a structure resembling a spiral staircase. Another, seen in some fish and most tetrapods, is simply elongating and then coiling the intestine. This can reach extremes in large herbivores: Oxen have intestinal lengths of over 150 ft (45 m). In numerous forms there are blind pouches, or ceca, off part of the intestine. In fish these are commonly at the anterior end; in tetrapods they generally lie at the junction between the large and small intestines. In all vertebrates the inner surface of the intestine is irregular, with ridges and projections of various sorts; these reach their maximum development in the extremely fine and numerous finger-shaped villi found in mammals.

In humans the intestine consists of the small and large intestines. The small intestine is further divided into three major parts: the duodenum, the jejunum, and the ileum. The duodenum, 10–12 in. (25–30 cm) long, begins at the pyloric sphincter of the stomach and curves around the head of the pancreas on the right side of the anterior part of the abdomen. It receives the ducts of the biliary system and the pancreas. The jejunum and ileum are about 19 ft (6 m) long and form a much-coiled tube that empties at right angles into the large intestine through the ileocolic valve (see illustration). The large intestine, or colon, consists of five parts: the ascending, transverse, descending, and sigmoid regions, and the terminal rectum which empties into the anal canal. 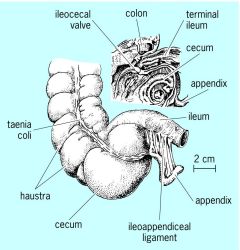 Junction of ileum with large intestine in humans

The microscopic structure of the intestine comprises an inner glandular mucosa, a muscular coat, and an outer serosa of connective tissues which is covered in most areas by peritoneum.

The intestine is supported by dorsal mesenteries of varying extent, which contain an extensive system of arteries, veins, lymphatics, and nerves to the various regions. See Digestive system

[in′tes·tən]
(anatomy)
The tubular portion of the vertebrate digestive tract, usually between the stomach and the cloaca or anus.
McGraw-Hill Dictionary of Scientific & Technical Terms, 6E, Copyright © 2003 by The McGraw-Hill Companies, Inc.

the part of the alimentary canal between the stomach and the anus
Collins Discovery Encyclopedia, 1st edition © HarperCollins Publishers 2005

Feedback
Flashcards & Bookmarks ?
Please log in or register to use Flashcards and Bookmarks. You can also log in with
Flashcards ?
My bookmarks ?
+ Add current page to bookmarks
Mentioned in ?
References in periodicals archive ?
In his doctoral thesis, Girmay Desalegn investigated how precursors of macrophages, so-called monocytes, develop in the small intestine and other tissues and how this process is influenced by inflammatory reactions.
RWTH Aachen University: Scavenger Cells Protect the Body's Tissue in a Specific Way
Bile moves directly from the liver, where it is produced, through ducts, to the small intestine. Bile will not be stored anymore but it will be available to help with digestion of fat in the small intestines.
Nutrition Hotline: This months Nutrition Hotline addresses dietary concerns after gallblader removal
Most nutrient and water absorption occurs in the small intestine, so if patients are not left with enough healthy tissue, they can suffer from serious complications like malnutrition or dehydration--also known as short bowel syndrome.
Stem Cell Science On The Verge Of Helping Babies With Underdeveloped Small Intestines
The mast cells showed various shapes and sizes in the small intestine and could be detected at four layered structures in the small intestine, but were mainly distributed in the lamina propria and the submucosa, surrounded with connective tissue and blood vessels.
Histological Structure and Mast Cell Distribution of Hedgehog's Small Intestine
The team members searched for a starting material that would have just the right properties to adhere to the small intestine and then dissolve within a matter of hours.
'Surgery in a Pill' Potential Treatment for Diabetes
artificial intelligence, to train a computer programme and analyse microscopic images of tissue located deep inside the small intestine.
Pakistani,US researchers launch artificial intelligence study
This case indicates that a second look laparotomy may provide time for revascularization of the intestine with doubtful vascularity and avoid unnecessary bowel resection.
Planned Second look laparotomy in neonatal volvulus: A safe approach for bowel salvage
Nekesa was then prepared for theatre and surgery was carried out, but no injury to the intestines or other internal organs were observed, surgeons said.
KNH doctors deny rupturing intestines during surgery
The new cells were used to grow miniature versions of the person's intestine lining, known as organoids.
Scientists Produce Human Intestinal Lining Using " Organ-Chip"
Basically, they're just gonna cut out a piece of my large intestine wherever the cancer is.'
Wil Dasovich 'alive and well' after surgery to remove remaining cancer
Furthermore, the results showed stimulatory effect of the [alpha] - galactosides on height of the villi, surface area and crypt depth in all studied segments of the intestine in the in ovo experimental group (P [?] 0.05) at day of hatch.
HISTO-MORPHOMETRIC ADAPTATION IN THE SMALL INTESTINE OF BROILER CHICKEN, AFTER EMBRYONIC EXPOSURE TO - GALACTOSIDES
After the food you eat passes through the stomach, the small intestine collects nutrients from the food and moves them into the bloodstream, converting food into molecules that cells can use.
Meet The Mesentery: The Newest Organ!