ionization chamber, device for the detection and measurement of ionizing radiation. It consists basically of a sealed chamber containing a gas and two electrodes between which a voltage is maintained by an external circuit. When ionizing radiation, e.g., a photon, enters the chamber (through a foil-covered window), it ionizes one or more gas molecules. The ions are attracted to the oppositely charged electrodes; their presence causes a momentary drop in the voltage, which is recorded by the external circuit. The observed voltage drop helps identify the radiation because it depends on the degree of ionization, which in turn depends on the charge, mass, and speed of the photon. See radioactivity.
The Columbia Electronic Encyclopedia™ Copyright © 2022, Columbia University Press. Licensed from Columbia University Press. All rights reserved.

While the gold leaf electroscope is the oldest form of ionization chamber, instruments of this type are still widely used as monitors of radiations by workers in the nuclear or radiomedical professions. However, for many purposes it is useful to measure the ionization pulse produced by a single ionizing particle. See Electroscope

The simplest form of a pulse ionization chamber consists of two conducting electrodes in a container filled with gas (see illustration). A battery, or other power supply, maintains an electric field between the positive anode and the negative cathode. When ionizing radiation penetrates the gas in the chamber—entering, for example, through a thin gas-tight window—this radiation liberates electrons from the gas atoms leaving positively charged ions. The electric field present in the gas sweeps these electrons and ions out of the gas, the electrons going to the anode and the positive ions to the cathode.

In a chamber, such as that represented in the illustration, the current begins to flow as soon as the electrons and ions begin to separate under the influence of the applied electric field. The time it takes for the full current pulse to be observed depends on the drift velocity of the electrons and ions in the gas. Because the ions are thousands of times more massive than the electrons, the electrons always travel several orders of magnitude faster than the ions. As a result, virtually all pulse ionization chambers make use of only the relatively fast electron signal.

Foremost among the other applications is the use of gas ionization chambers for radiation monitoring. Portable instruments of this type usually employ a detector containing approximately 60 in.3 (1 liter) of gas, and operate by integrating the current produced by the ambient radiation. Another application of ionization chambers is the use of air-filled chambers as domestic fire alarms. Yet another development in ion chamber usage is that of two-dimensional imaging in x-ray medical applications to replace the use of photographic plates.

Gaseous ionization chambers have also found application as total-energy monitors for high-energy accelerators. Such applications involve the use of a very large number of interleaved thin parallel metal plates immersed in a gas inside a large container.

Ionization chambers can be made where the initial ionization occurs, not in gases, but in suitable liquids or solids. In the solid-state ionization chamber (or solid-state detector) the gas filling is replaced by a large single crystal of suitably chosen solid material. In this case the incident radiation creates electron-hole pairs in the crystal, and this constitutes the signal charge. Silicon and germanium detectors have proved to be highly successful and have led to detectors that have revolutionized low-energy nuclear spectroscopy. The use of a liquid in an ionization chamber combines many of the advantages of both solid and gas-filled ionization chambers; most importantly, such devices have the flexibility in design of gas chambers with the high density of solid chambers. During the 1970s a number of groups built liquid argon ionization chambers and demonstrated their feasibility. 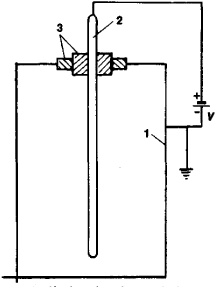 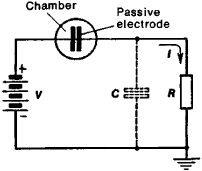 [‚ī·ə·nə′zā·shən ‚chām·bər]
(nucleonics)
A particle detector which measures the ionization produced in the gas filling the chamber by the fast-moving charged particles as they pass through. Also known as ion chamber.
McGraw-Hill Dictionary of Scientific & Technical Terms, 6E, Copyright © 2003 by The McGraw-Hill Companies, Inc.

Feedback
Flashcards & Bookmarks ?
Please log in or register to use Flashcards and Bookmarks. You can also log in with
Flashcards ?
My bookmarks ?
+ Add current page to bookmarks
Mentioned in ?
References in periodicals archive ?
In 2008, NIST performed several ionization chamber measurements as part of the project to develop a calibration surrogate for an [sup.18]F-containing syringe [87].
A review of NIST primary activity standards for [sup.18]F: 1982 to 2013
The two-voltage technique was applied with the Radcal 10X5-1800 ionization chamber positioned at the same reference position described in the previous section and in front of the same Rapiscan single-pose scanner.
The metrology of a rastered spot of X rays used in security screening
Both phantoms have holes drilled at specific locations to accommodate the ionization chamber during dose measurement.
Radiation Dose In Computed Tomography
The NIST standards for low-energy-photon-emitting, sealed brachytherapy sources are used to establish the air kerma and then transfer the measurement to (calibrate) well-type ionization chambers, both at the NIST and often at secondary calibration laboratories such as the American Association of Physicists in Medicine's (AAPM) Accredited Dosimetry Calibration Laboratories.
New national air-kerma standard for low-energy electronic brachytherapy sources
Calhoun, Radioactivity Calibrations with the NBS "4[pi]" [gamma] Ionization Chamber, and Other NBS Radioactivity Calibration Capabilities, NBS SP 250-10, Gaithersburg, MD, USA, August 1986, p.
NIST ionization chamber "A" sample-height corrections
The comparison ionization chamber was placed at the measuring distance of 2000 mm from the source.
Comparison between the NIST and the KEBS for the determination of air kerma calibration coefficients for narrow x-ray spectra and [.sup.137]Cs gamma-ray beams
The PTB x-ray air kerma measurements were made using the PK100 primary standard free-air ionization chamber. The PTB mammographic reference radiation qualities are produced with a unipolar x-ray tube of type Philips PW2185/Mo with a Mo anode angle of 26[degrees] combined with a constant potential generator.
Comparison of the NIST and PTB air-kerma standards for low-energy x-rays
A segmented ionization chamber based on a helium-3 and argon gas mixture with coarse spatial and energy resolution was built for a preliminary fundamental physics measurement of the neutron spin rotation in a liquid helium target [4].
Development of a position sensitive neutron detector with high efficiency and energy resolution for use at high-flux beam sources
Swanson, Development of a low-noise 3He ionization chamber for measuring the energy spectrum of a cold neutron beam, Nucl.
Measurement of the parity-violating neutron spin rotation in [.sup.4]He
The collection plates of the segmented [.sup.3]He ionization chamber used in the helium measurement is divided into four quadrants providing useful neutron count-rate information in the upper, lower, right and left regions of the beam [5].
Parity-violating neutron spin rotation in a liquid parahydrogen target
A commercially-available [.sup.3]He ionization chamber would be suitable for this.
A new method for precision cold neutron polarimetry using a [.sup.3]He spin filter