The process by which an electron is removed from an atom, molecule, or ion. It is of basic importance to electrical conduction in gases and liquids. In the simplest case, ionization may be thought of as a transition between an initial state consisting of a neutral atom and a final state consisting of a positive ion and a free electron. In more complicated cases, a molecule may be converted to a heavy positive ion and a heavy negative ion which are separated.

Because of the high temperatures in stars, much of the matter present is in an ionized state; often more than one electron has been lost so that the atom or molecule is doubly or triply ionized, etc. In astronomy the neutral state of an element is conventionally denoted by I (H I, for example, denotes neutral hydrogen) whereas II denotes singly charged ions (H II is ionized hydrogen) and III indicates a doubly charged ion, and so on. See also plasma; Saha ionization equation.

The addition of electrons to neutral atoms or molecules (formation of negative ions) differs from other ionization events in that it may be accompanied by either the consumption or release of energy; in the latter case the atoms or molecules of the substance are said to have electron affinity.

If the ionization energy W is imparted to the particle by another particle (electron, atom, or ion) upon collision, the ionization is called impact ionization. The probability of impact ionization, which is characterized by the effective ionization cross section, depends on the type of particles bombarding and being ionized, as well as on the kinetic energy Ek, of the bombarding particles. Up to a certain minimum (threshold) value of Ek, the probability is equal to zero; it increases rapidly when Ek passes the threshold, then reaches a maximum, and finally decreases (Figure 1). If the energies imparted to the particles undergoing ionization during the collisions are sufficiently high, the formation of singly charged ions may be accompanied by the formation of multicharged ions (multiple ionization) from these particles (Figure 2). Collisions of atoms and ions with atoms may lead to the ionization not only of the particles undergoing bombardment but also of the bombarding particles. This phenomenon is known as stripping of the particle beam. The incident neutral atoms lose their electrons and become ions, whereas the incident ions experience a charge increase. The reverse process—that is, the electron capture from the particles undergoing ionization by incident positive ions—is called charge exchange of ions. 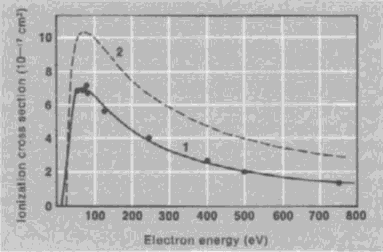 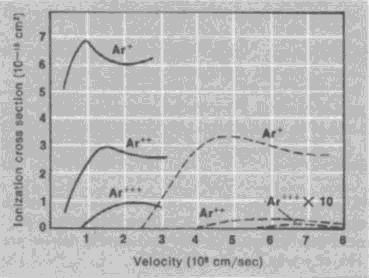 Under certain conditions, the particles may also undergo ionization during collisions involving the transfer of energy less than W. At first, the atoms or molecules are excited by collisions, after which only an energy equal to the difference between JFand the energy of excitation must be imparted to them to produce ionization. Thus, the “accumulation” of the energy required for ionization is achieved by several consecutive collisions. This type of ionization is called stepwise ionization. It is possible if collisions occur so frequently that the particle does not lose the energy received in the first collision in the interval between collisions. The necessary conditions prevail in dense gases and high-intensity fluxes of bombarding particles. In addition, the mechanism of stepwise ionization is very important in cases when the particles of the material undergoing ionization have metastable states (that is, they are capable of preserving the excitation energy for long periods of time).

Ionization is caused not only by particles impinging from without. When the energy of the thermal motion of atoms or molecules of the material is sufficiently high, the particles may ionize one another during collisions, thus giving rise to thermal ionization. This type of ionization attains considerable intensity at temperatures of ~ 1000°-10,000°K (for example, in flames, arc discharge, shock waves, and stellar atmospheres). The degree of thermal ionization of a gas as a function of the temperature and pressure of the gas may be estimated from thermodynamic considerations.

Processes in which the particles undergoing ionization receive their energy of ionization from photons (quanta of electromagnetic radiation) are called photoinization. If the atom or molecule is not excited, the energy of the ionizing photon hv, where h is Planck’s constant and v is the radiation frequency, should be not less than the energy of ionization W. For all atoms and molecules in gases and liquids, W is such that the above condition will be satisfied only by ultraviolet and harder photons. However, photoionization is also observed for hv < W (for example, upon irradiation with visible light). This is explained by the fact that the ionization may be of a stepwise nature. The initial absorption of one photon excites the particle, after which interaction with the next photon leads to ionization. In contrast to impact ionization, the probability of photoionization is highest just at the threshold energy of the photon hv ≃ W, and it decreases upon further increase of v. The maximum photoionization cross sections are 100–1,000 times smaller than those for impact ionization. The lower probability is compensated in many photoionization processes by a considerable photon flux density, which may lead to a very large number of ionization events.

If the difference hv— W relatively small, the photon is absorbed during the ionization event. High-energy photons (X-ray and γ-ray quanta), losing part of their energy, Δ E, undergo a change in frequency by the quantity Δ v = Δ E/h. The passage of such photons through matter may generate a large number of photoionization events. The difference Δ E— W (or hv— W, during photon absorption) is converted into the kinetic energy of the ionization products, particularly of free electrons, which are capable of performing secondary ionization events (impact ionization).

Ionization by laser radiation is of great interest. As a rule, its frequency is insufficient to achieve ionization by the absorption of a single photon. However, the extraordinarily high density of the photon flux in the laser beam makes possible the occurrence of ionization as the result of simultaneous absorption of several photons (multiphoton ionization). Ionization involving the absorption of seven to nine photons has been observed experimentally in rarefied vapors of alkali metals. Laser ionization in denser gases is of the combination type. The initial multiphoton ionization liberates several “priming” electrons, which are accelerated by the field of the light wave and then excite atoms (by impact), which are then ionized by the light, but with the absorption of fewer photons.

Photoionization plays an essential role in the ionization processes occurring in the upper layers of the atmosphere, and in the formation of streamers during electric breakdown in gases.

The reverse process of ionization is the recombination of ions and electrons, which leads to the formation of neutral ions and molecules. A gas protected from external action at ordinary temperatures undergoes recombination and rapidly passes into a state in which its degree of ionization is negligible. Therefore, appreciable ionization of a gas may be maintained only through the action of an external ionizer (fluxes of particles or photons, or heating to high temperatures). At a certain concentration of charged particles, the ionized gas becomes plasma, which has properties that differ sharply from those of the neutral gas.

A special feature of the ionization of liquid solutions is the fact that the molecules of dissolved material in the solutions dissociate into ions during the process of solution itself, without the need for any external ionizer, as a result of interaction with molecules of the solvent. The interaction between the molecules leads to spontaneous ionization even in some pure liquids (water, alcohols, or acids). This additional ionization mechanism in liquids is called electrolytic dissociation.

Ionization in solids. Ionization in solids is the process of transformation of the atoms in a solid into charged ions associated with the transition of electrons from the valence band of a crystal to the conduction band (in the case of impurity atoms, it is associated with the loss or capture of electrons). The ionization energy If in a solid is of the order of the width of the forbidden band Eg. Electrons in crystals with a narrow forbidden zone may acquire the energy If as a result of thermal vibration of the atoms (thermal ionization). During photoionization, the required energies are imparted to electrons by photons, which are either passing through the solid or are being absorbed by it. Ionization also occurs when a stream of charged particles (electrons or protons) or neutral particles (neutrons) passes through the solid.

Impact ionization in a strong electric field applied to the solid is of special interest. In such a field, conduction band electrons participating in the electrical conduction may acquire kinetic energies in excess of Eg and may “knock” electrons out of the valence band, where they cannot participate in the electric conduction. This leads to the formation of holes in the valence band, whereas two “slow” electrons appear in the conduction band in place of each “fast” electron. The slow electrons are accelerated in the field and, after acceleration by the field, may in turn become fast and generate ionization. The probability of impact ionization increases with increasing intensity of the electric field. At a certain critical field intensity, impact ionization leads to a sharp increase in current density, which corresponds to electric breakdown of the solid.

[‚ī·ə·nə′zā·shən]
(chemistry)
A process by which a neutral atom or molecule loses or gains electrons, thereby acquiring a net charge and becoming an ion; occurs as the result of the dissociation of the atoms of a molecule in solution (NaCl → Na++ Cl-) or of a gas in an electric field (H2→ 2H+).
McGraw-Hill Dictionary of Scientific & Technical Terms, 6E, Copyright © 2003 by The McGraw-Hill Companies, Inc.

Feedback
Flashcards & Bookmarks ?
Please log in or register to use Flashcards and Bookmarks. You can also log in with
Flashcards ?
My bookmarks ?
+ Add current page to bookmarks
Mentioned in ?
References in periodicals archive ?
Previously, sensors that use an electric field to ionize gases haven't been practical.
Gas sensor uses nanotube parts. (Materials Science)
The nebula known as N44C contains two massive stars, but even the hottest, most massive one lacks the oomph to ionize helium.
Gorgeous gas: new observations of space clouds reveal stellar histories.
The LAESI DP-1000 directly ionizes samples in a two-step process: laser ablation followed by electrospray ionization.
Laser, electrospray combo samples live cells
SPI also ionizes commercial quantities of spices and herbs for disinfestation and microbial reduction purposes.
E-B ionization zaps salmonella
When mounted just above a pad of electrically conductive foam and energized with thousands of volts, the needle produces a powerful electric field that ionizes the surrounding air, says University of Washington team member Nels E.
The little chill: tiny wind generator to cool microchip hot spots
That presents two problems: Where did these elements come from, and what source of energy ionizes them?
After Hubble: the Next Generation: probing the final frontier