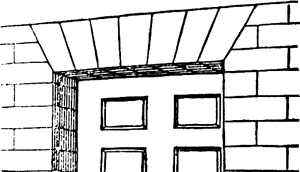 Feedback
Flashcards & Bookmarks ?
Please log in or register to use Flashcards and Bookmarks. You can also log in with
Flashcards ?
My bookmarks ?
+ Add current page to bookmarks
TheFreeDictionary presents:
Write what you mean clearly and correctly.
Mentioned in ?
References in periodicals archive ?
However, the combination of European and local expertise resulted "Jack Arch" roofing system as sustainable and economical for colonial buildings in India.
The origin of Jack Arch belongs to Europe where first structure was constructed in 1801 and later on it was also spread Eastward and Middle East (Hilton, 1997).
The current study was planned to find out that how Jack Arch became useful to accommodate the European space requirements and indoor climatic comfort in plain areas of the Punjab.
Jack Arched Roofing: It reveals from archival drawings and existing old buildings that the major components of Jack Arch roofing were Bricks for construction of Segmental Arch, Steel Joists to support arches, Tie Rods at ends arches to keep the arch in its original position and to address the problems of tensile stresses, Wall Plates and Nuts to make the connection of Tie Rods from its both ends.
A Jack Arch roof is usually formed with number of 4.5 inches thick brick masonry segmental arch of 6-9 inches rise from centre for 4 - 6 feet span supported by Rolled Steel Joist (RSJ) spanned over shorter dimension of room from wall to wall.
Fig 3: Table for selection of Rolled Steel Beam for Jack Arch Roofing (1934).
This proves that module for Jack Arch in a particular bungalow was dependent on the space requirements within in the limitations 4-6' but not like Indian house where a space was dependent on wooden beam limitations.
Besides the roofing of the buildings and giving strength to structure the shape of the Jack Arch was most effective tool for ventilation for low and high roof spaces in bungalows.
Jack Arch was also used for constructing Double roof to control indoor thermal condition of the rooms (Fig.
Jack Arch was a roofing system for Industrial Buildings in Europe whose major components were Steel Girders and Brick Arch.
However, the origin of Jack Arch indicates that it was primarily invented to cater the span requirements of Industrial buildings in England but in British India the system had been interestingly extended to roof construction of every type of building.
In railway the waste steel in the form Double Headed Rail Joists (DHRJ) was an additional provision and incentive to construct Jack Arch roofing for buildings of every nature without any major cost involvement.
JACK ARCH: THE BACK-BONE OF BRITISH COLONIAL RESIDENTIAL BUILDINGS IN INDIA