Any rafter shorter than the full length of the sloping roof, such as one beginning or ending at a hip or valley. See also: Rafter 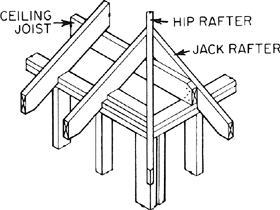 jack rafter
Any rafter that is shorter than the usual length of the rafters used in the same building; esp. occurs in hip roofs.

Feedback
Flashcards & Bookmarks ?
Please log in or register to use Flashcards and Bookmarks. You can also log in with
Flashcards ?
My bookmarks ?
+ Add current page to bookmarks
TheFreeDictionary presents:
Write what you mean clearly and correctly.
Mentioned in ?
References in periodicals archive ?
To mark the common and jack rafters, clamp a 2x4 precisely above the spot where it will be installed (Photo 17).
Stone & timber yard shed
Then measure, cut and nail the valley jack rafters every 24 in.
Frame a gable dormer: looks great on the outside. Expands and brightens the inside
Photo 14 shows you how to set the jack rafters. When you fasten the lower end to the plywood, drive the screw in at an angle so the tip doesn't poke through the ceiling inside.
Victorian screen house: escape the bugs in style, whether you're entertaining friends or just hanging out. (Cover Story)
7 CUT the compound angles for the hip and jack rafters. Remember that opposite hips and jacks are mirror images of each other.
Screen house; the perfect outdoor retreat